HURRICANE HELP: Learn how you can help provide for victims of Hurricane Ian
NewsLocal News

Experts are raising red flags about 15-passenger vans like the one that crashed Friday, killing three local teens. The government first warned of the dangers nearly 20 years ago.

KANSAS CITY, Mo. — A community is mourning the loss of three teens killed on Friday when their church van blew a tire and rolled over in Polk County.

The events that played out that morning mirror warnings issued by the National Highway Transportation Safety Administration since 2001.

Spagnoli represented the family of a woman killed in a 2014 accident in north Florida. Michalanne Salliotte was riding on a church van when the tread separated from the left rear tire, causing the vehicle to roll over. Four people were ejected and two killed. 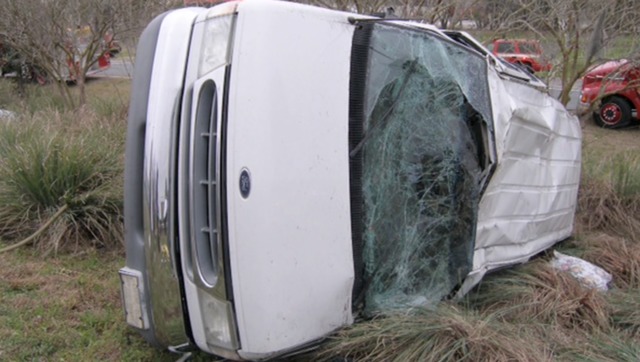 "The more people you put in them, the more difficult they are to control for the driver because the center of gravity moves up and rear-ward," Spagnoli explained.

The safety concerns are nothing new.

The National Highway Traffic Safety Administration (NHTSA) published research in 2001 on the rollover propensity of the vehicles. NHTSA found 15-passenger vans with ten or more occupants had three times the rollover rate of those with less than 10 people on board.

Page 1 of The Rollover Propensity of Fifteen Passenger Vans

That wasn't the only issue. In fact, consumer advisories about the vans have been issued almost every year since.

In 2004, experts warned of low seatbelt use on the vans, finding more than three-quarters of the passengers killed were not wearing safety restraints.

According to the crash report, eight of the 13 people on the Faith Chapel van were not wearing seatbelts, including the three teens who died.

"People get in them, and they don't think they need to wear seatbelts in buses, and many buses don't have seatbelts anyway," Spagnoli said.

NHTSA even warned that fatal rollovers involving the vans were most likely to involve tire failures, which troopers say was the cause of the Faith Chapel crash.

Pastor Sondra Cave told 41 Action News the van was inspected before each use, and the tires were replaced this summer. The pastors have not yet responded to our request for comment on safety concerns associated with the vans.

"I've got two kids, and I wouldn't let them ride in the vans," John Goodbrake said.

"People don't know that there are other options out there," he said of the decision to rent 15-passenger vans.

Although the company still has some trade-in vans on the lot, Goodbrake says they recommend 15-passenger shuttles instead. The shuttles have dual rear wheels to help with stabilization, plus a steel roll cage throughout.

He called the Faith Chapel crash heartbreaking and also frustrating.

"It could've been prevented in some ways," Goodbrake said.

Spagnoli thinks the 15-passenger vans, as they're currently designed, should be off the road completely.

"The vehicles are very difficult to control under perfect circumstances, so it's just a tragedy waiting to happen with all these vans out there," she said.