The filing is part of the company’s effort to convince the federal government to approve its merger with T-Mobile.

In the presentation, obtained by 41 Action News, Sprint says it “faces substantial challenges that limit its effectiveness.”

In part of the presentation, Sprint admits the footprint of its LTE Network “covers a much smaller geography” than its direct competitors. 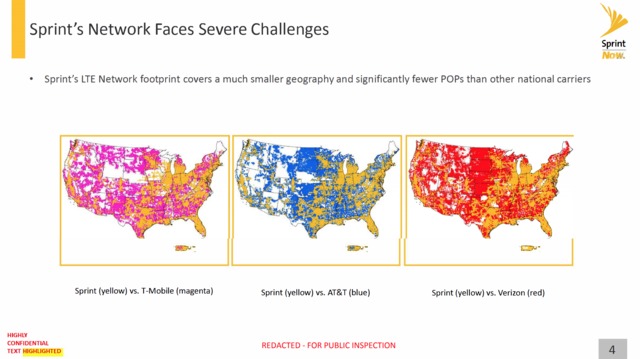 Another page in the presentation by Sprint and T-Mobile to the FCC is even titled, “No obvious path to solve key business challenges.”

The bullet points on the page seem to show a company that cannot survive without the merger.

One reads, “Sprint needs to make significant investments in its network, but even with our business transformation and improved cost structure, our debt burden and lack of scale and profitability diminish our ability to simultaneously increase investment in our network and offer promotional pricing.”

But the presentation says that will change if Sprint and T-Mobile merge. “The transaction will create a much stronger competitor with the scale and resources to disrupt AT&T and Verizon.”

Currently, according to the presentation, Sprint carries more than $40 billion in debt. It also says the company’s current transformation is focused on cost-cutting.

In the presentation, it says Sprint has eliminated about $10 billion in annual costs. Which, the company says has allowed it “to boost near-term probability.” The presentation goes on to say, “cost-cutting is nearing its limit and becoming more difficult.”

A local economist told 41 Action News Friday night, he thinks Sprint painted such a dim picture for a specific purpose.

"They really did have to show the ugly side of the company and they did it on purpose," Chris Butler said. "In my opinion, they did this with the intention of painting the worst possible picture so the merger does get approved."

Sprint gave the presentation on September 21. It came about 10 days after the FCC said it needed more time to review the merger.

As for Sprint employees, Butler says this presentation may spark some concern.

In August, Sprint announced plans that could include the company selling its campus in Overland Park. The company would then lease back the buildings it needs. Currently, Sprint only occupies 11 of the 20 buildings on the campus.