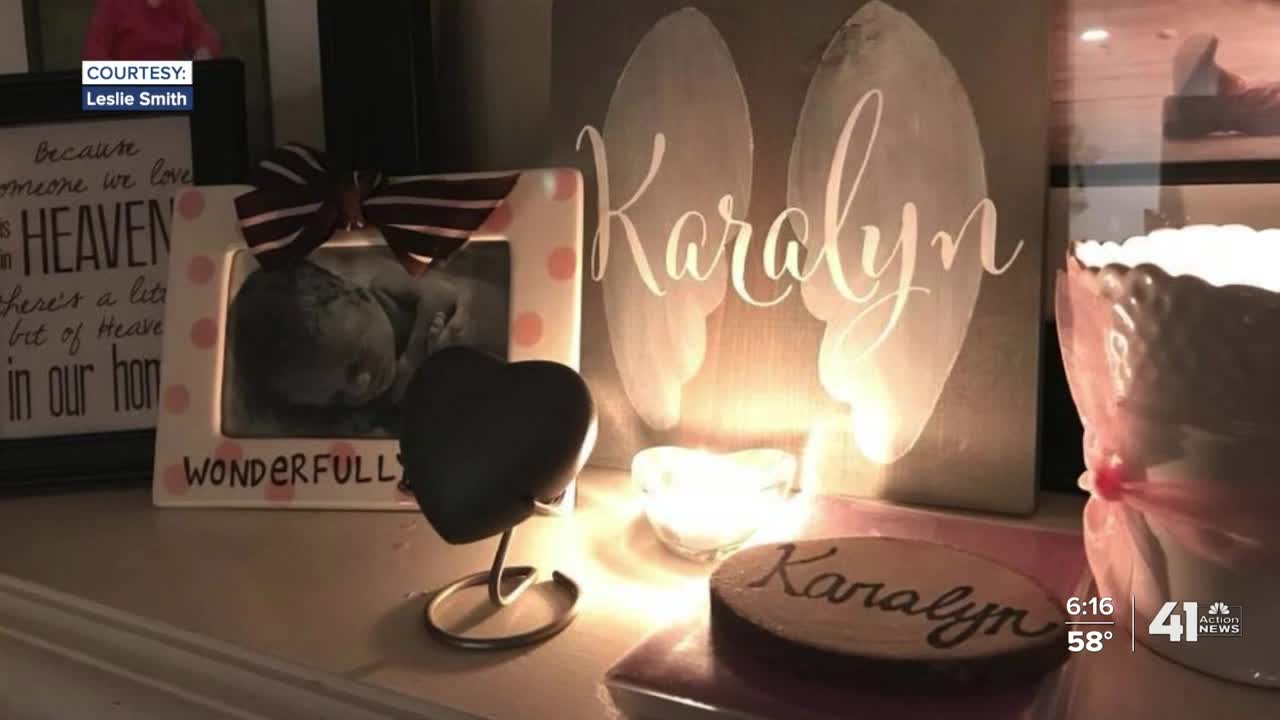 Oct. 15 is Pregnancy and Infant Loss Awareness Day — a day when parents all over the world light a candle to honor young lives lost too soon. It's a story that hits home for an Olathe family, whose daughter passed away in their arms, one hour after her birth. OLATHE, Kan. — Oct. 15 marks Pregnancy and Infant Loss Remembrance Day. It's a somber anniversary parents all over the world mark by lighting candles at 7 p.m., as part of what's called "the Wave of Light."

It's a show of support for families who have lost a child, many of them to miscarriage, but some shortly after birth.

That was the case for one Olathe family who's since used their grief to help others.

It's a story that starts seven years ago.

"We found out we were pregnant in 2013, early on in 2013 with our third daughter. We announced it at 12 weeks, and two days later I started bleeding," Leslie Smith said.

Smith and her husband feared they were about to miscarry, but their daughter held on and the weeks passed by.

Then, they learned she had a heart defect which required surgery while she was still in the womb.

They traveled to C.S. Mott Children's Hospital in Michigan for the procedure, but several days after the operation, something went wrong.

"That was at about 30 weeks, and I'm not exactly sure what happened, but I'm pretty sure that that ended up spurring me into pre-term labor," Smith said. "When she was born, she was alive, but her lungs were just too sick, and they couldn't get them to open. So, we had just to hold her until her heart stopped beating."

Born two months early at Truman Medical Center, there was nothing more doctors could do, and little Karalyn passed away in her parents' arms.

There she would stay till the next day, as the family tried to make the most of their limited time with her.

"My husband sang her a song he sings all the girls, we snuggled her, we napped with her, we read her a book. You know, all those things that you would treasure in your heart with your kid when you get to take them home. We fit it all in, in 24 hours," Smith said.

Smith said leaving the hospital was one of the hardest parts, as she was wheeled out of a maternity ward without her baby.

It was the experience of going home heartbroken and empty-handed that gave her the idea to give back to other grieving parents.

Inside, families find everything from a letter sharing the Smiths' story, to a list of resources including support groups, self-help books, and more.

"One of my favorite quotes, 'Because someone we love is in heaven, there's a little bit of heaven in our home,'" Smith read aloud from a framed picture in a box.

"This is for the dads, a little keychain, 'Daddy of an Angel,'" she said, picking up another item, alongside a journal, tissues, a candle, and bracelets.

The family selects everything that goes into the boxes, and it's all packed with love, with the entire family pitching in, before they're taken to Truman Medical Center, where Karalyn was delivered, Children's Mercy Hospital, and a hospital in Indiana where they used to live.

"I think of other moms losing babies, and I know how my mom felt when she lost a child, so I just like to help other moms through it when they lose a child like us," said Smith's 8-year-old daughter, Raegan.

As for Karalyn, she lives on in their memories, gone. Her picture rests on the mantle with those of her four other sisters.

On the wall, she's part of a special family portrait.

"This picture was really special. We did this a few years ago, had a friend take it, then inserted a shadow of what, around how big she might have been, at that time," Smith said.

For the Smiths, keeping Karalyn's memory alive is a part of the healing process, as is lighting a candle in her honor each year on Pregnancy and Infant Loss Remembrance Day.

"It's been seven years. I've healed a lot. You know, I can smile again, I can laugh again. But my heart breaks for people just starting out in that journey because it is a tough place to be," Smith said.

Smith said it took her a long time to process her grief, but she wants other parents to know there's help out there, including counseling, retreats for parents who have lost a child, and various support groups on social media, especially on Facebook.

She also said having friends and family members acknowledge that loss is important, something that's echoed by a psychologist at Truman Medical Center.

"Sometimes people are a little hesitant, saying, 'Well, I don't want to bring it up, maybe it will make them sad.' They're already sad. You're not going to make them sad. And so bringing that up just helps validate that emotion for them," said Dr. Tiffany Ruffin.

Ruffin said it's okay to tell someone you don't know what to say, just let them know you're there for them.

Smith also suggested putting the anniversary of their loss in your phone so you can reach out to a loved one every year with a text or a card.