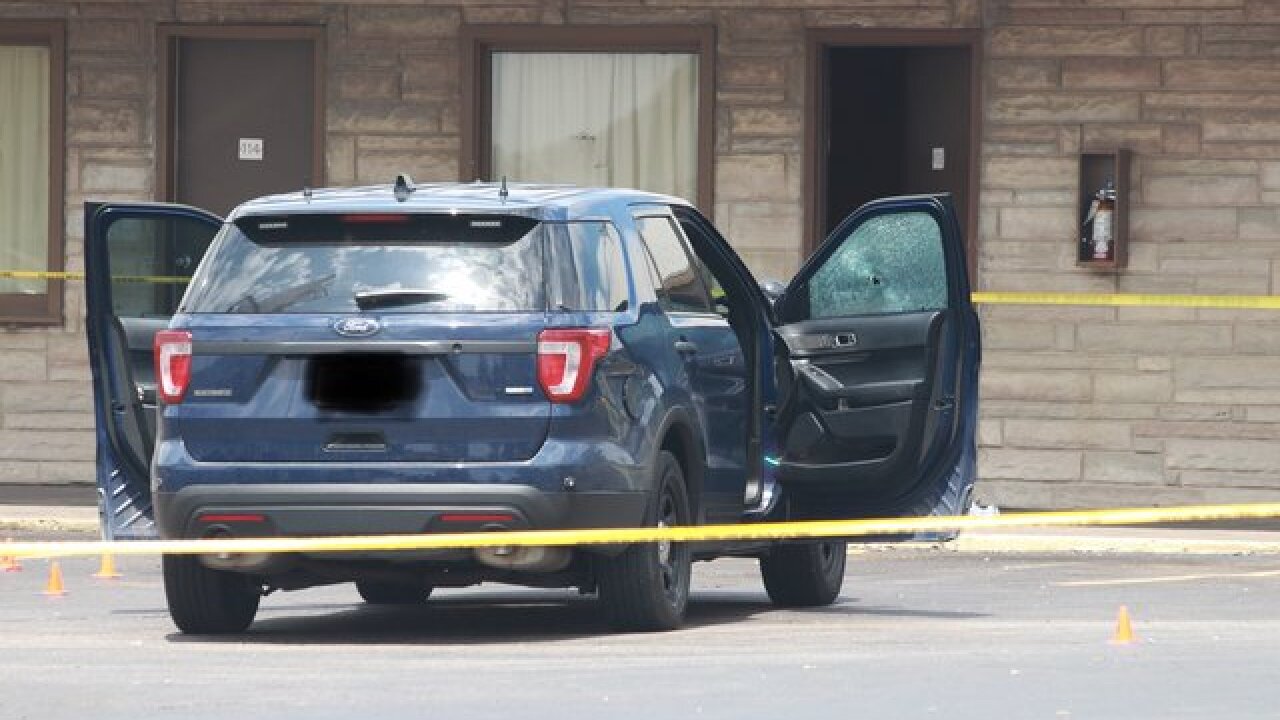 Copyright 2018 Scripps Media, Inc. All rights reserved. This material may not be published, broadcast, rewritten, or redistributed.
<p>Two officers shot today in Kansas City. Now a third officer officer has been shot at 30th and Topping. Photos from one of the scenes at the Sky-Vu Motel located at 40 Highway and 435. One officer vehicle with damage to window. Several evidence markers on ground. Photo by Giovanni Garcia/KSHB</p> 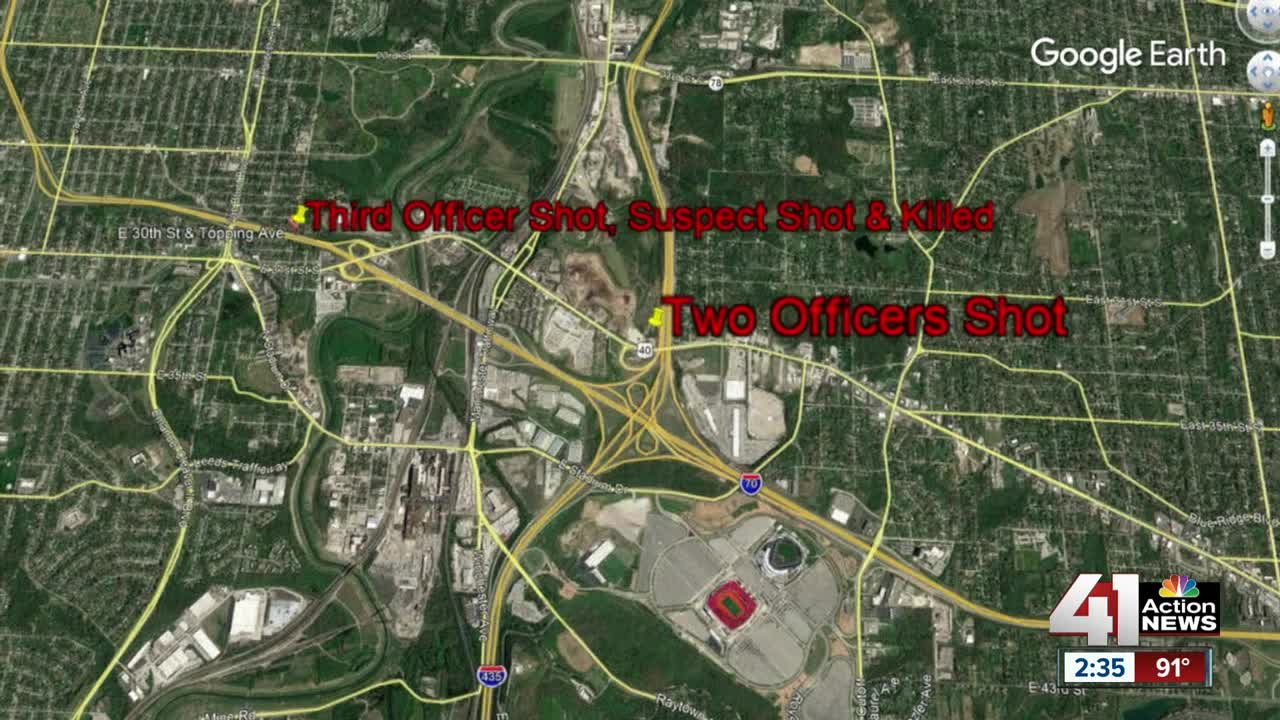 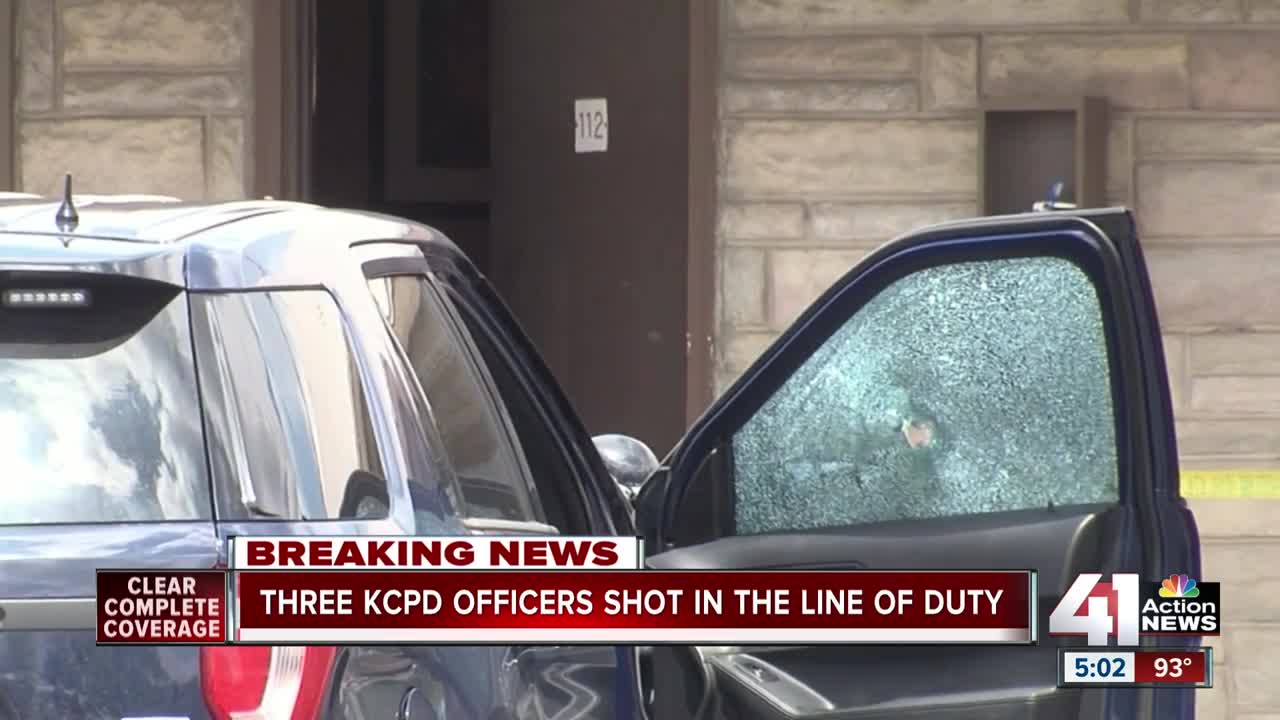 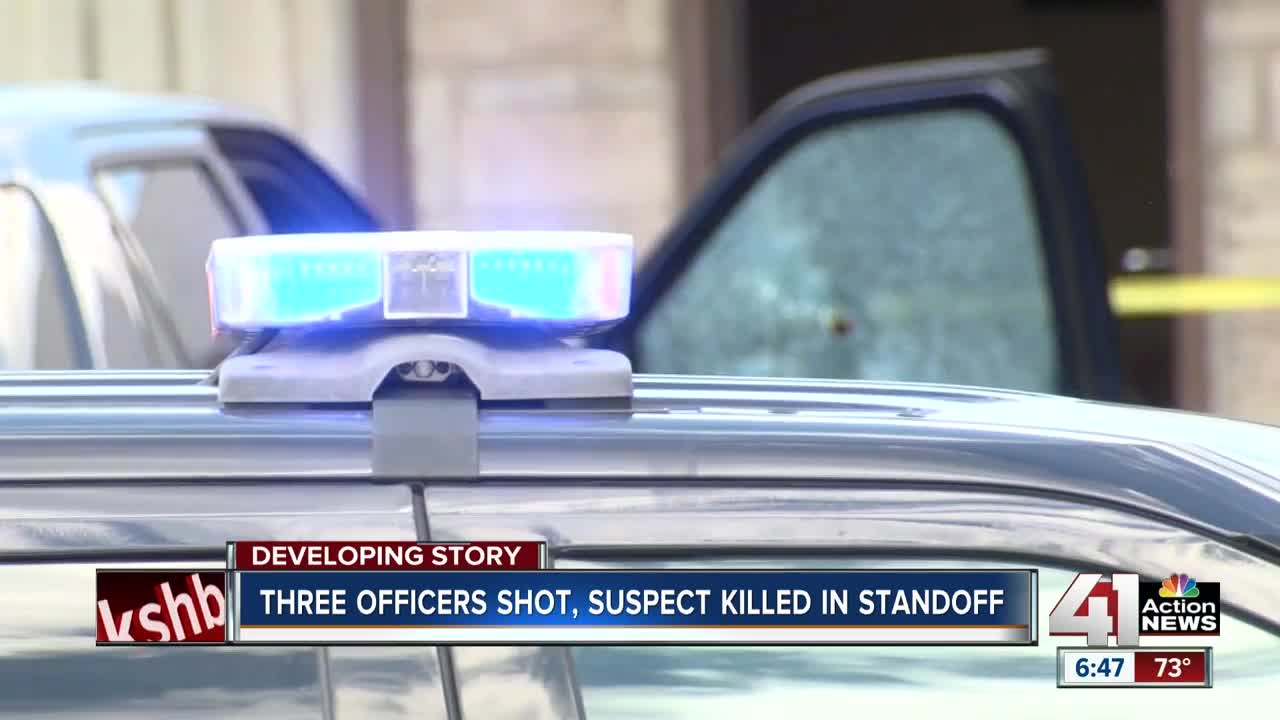 The officers were transported to an area hospital and are all expected to survive.

The suspect, who was under surveillance for the murder of a UMKC student, was killed during a second exchange of gunfire with police near 30th Street and Topping Avenue.

A KCPD spokesperson said the two officers who were shot at the first scene outside the Sky-Vu Motel were working undercover in the area when the suspect fired at them with a rifle.

Motel residents, including Lester Kirby, were frightened by the gunfire. He took cover inside his room during what he said was about 20 seconds of gunfire.

"In my bathroom, that's the safest place you can go when stuff like that happens," Kelby said.

Crime Scene processing will continue through the night and likely into tomorrow.  These photos are from the original scene on 40 hwy. Officers were inside this car when they were fired upon by the suspect pic.twitter.com/6zzt1yGkF1

Shortly after that initial exchange, police shut down Interstate 70 at Manchester and Van Brunt Boulevard to search for a possible suspect. All lanes were reopened after 1:30 p.m.

Police found the suspect's vehicle with another person inside near 29th Street and Van Brunt Boulevard before being called to 30th and Topping, where the suspect injured a third KCPD officer before he was fatally shot.

KCPD Chief Rick Smith said he thought the third officer was shot in the forearm.

“All three at this time appear to have non-life-threatening injuries, thank God,” Smith said.

Police detained the person found in the suspect’s car, but later indicated on Twitter that “the only suspect is in custody.”

As of 2p officers are still working to confirm the house involved is unoccupied but it is believed the only suspect is in custody at this time.  We are not actively searching for any other suspects.

Police have not confirmed the identity of the suspect but did say he was a person of interest in the murder of Sharath Koppu, a computer science graduate student from India who recently finished his first semester at UMKC.

Koppu was working at J’s Chicken and Fish near 54th Street and Prospect Avenue when he was shot and killed during an attempted robbery. Koppu's boss at the restaurant declined comment, but an employee said he had been in contact with the student's family about the person of interest on Sunday.

Police released surveillance video that clearly showed the suspect in Koppu’s murder and KC CrimeStoppers was offering a $10,000 reward, which is typical is unsolved homicides. But tips were slow to develop.

It’s still unclear if the suspect killed Sunday is the same man on the surveillance video, but police had been intently searching for him.

“On the individual, we had been trying to get up on him all week,” Smith said. “This is the first time we had laid eyes on him.”

Police were canvassing neighborhoods around the Sky-Vu Motel, “places he could have been,” Smith said. “One of those locations, he just popped up. We didn’t know he was there. He just popped up all of a sudden and engaged the officer.”

Althea Goodwin, who lives near 29th and Topping, said she called her daughter who lives across the street and told her to stay inside when she heard about the shootings and heard the police helicopter overhead.

“Then, I went to my front kitchen and saw the SWAT going through, so I thought, ‘I’m not going outside,’” she said. “So, I stayed inside and kept my eye on my phone. … I wasn’t about to come outside. I called my daughter and told her not to come outside, not to let the kids out.”

Just down the street from Goodwin, a service was underway at United Believers Community Church.

Two officers shot today in Kansas City. Now a third officer officer has been shot at 30th and Topping. Photos from one of the scenes at the Sky-Vu Motel located at 40 Highway and 435. One officer vehicle with damage to window. Several evidence markers on ground. @41actionnews pic.twitter.com/RapO6oxbQU

Edward Newsome, who is married to 41 Action News Anchor Cynthia Newsome, is the chairman of the deacon board at the church. He said church leaders secured the entrances to the building and later escorted women and children to their cars. He heard 30 or 40 shots during the incident.

The outpouring of support was overwhelming and immediate, Smith said. It also highlighted the inherent dangers of the job.

“Today’s events, which led to three of our officers shot, is another reminder how dangerous the job we do can be,” Kansas City, Missouri, Fraternal Order of Police Lodge #99 President Brad Lemon said in a statement. “We are extremely grateful all three officers are expected to recover but we need to be mindful of the mental toll incidents like this can have, not just on the officers injured but those who witnessed and responded to the various scenes.”

RELATED: Support pours in for KCPD after 3 officers shot

Lemon went on to encourage officers to reach out confidentially if they need to talk to someone about the incident.

“I am extremely proud to be a part of KCPD and the response today from our department and friends in neighboring jurisdictions once again shows us the strength of our Blue Family,” Lemon's statement continued. “Please keep the officers who were injured and everyone involved in today’s events in your thoughts and prayers.”

“On behalf of the entire UMKC family, I want to express our gratitude to all of the brave first responders involved in today’s events, especially the three injured officers, along with our hopes for their speedy and full recovery. These public servants risked their lives to pursue justice for our murdered student, Sharath Koppu. Our university will continue to pursue solutions to the problems of crime and violence that bedevil urban communities across America, as well as solutions to the economic and social problems that drive these issues. We must come together as one community now to pursue peace and healing.”

"We're looking over basically every square foot of the property here where this event happened yesterday," Becchina said. "We want to do this to make sure we don't miss any evidence that's out here, we want to cover every piece of evidence that we can so we can get an accurate representation of exactly what happened here yesterday."

KCPD anticipated there to be a lot of evidence.

"That's why we're using the extra personnel from the academy to really do a thorough search to make sure they get everything that there is," Becchina said.

Becchina said right now detectives are still working on the connection between the shooter and the 29th and Topping location — whether or not it was a random location or known to the suspect.

He said the department has felt an outpouring of support from the community.

"I want to express our appreciation of that on behalf of our whole department," he said. "People have sent well wishes all over the country, other police departments, media outlets, neighborhood associations. We've really received a lot of support and those officers that are in the hospital, they're feeling that right now."
—