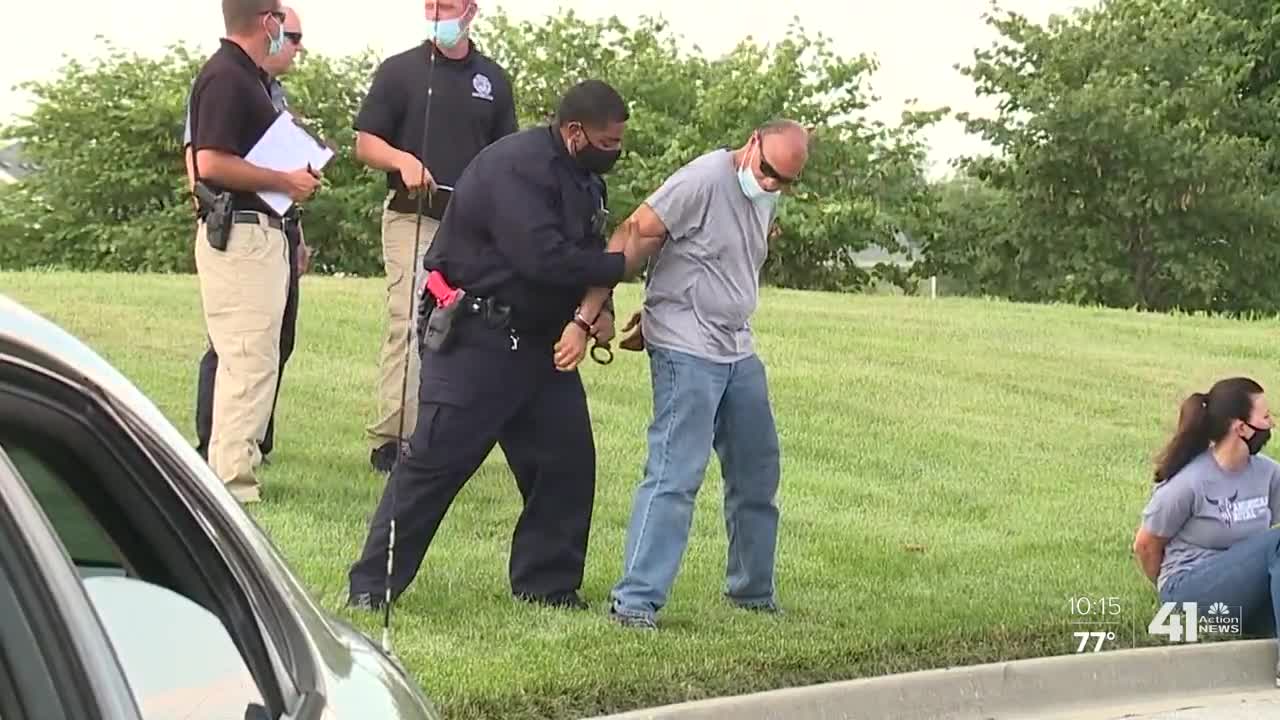 As the men and women of the 169th class of the Kansas City, Missouri, Police Department's Regional Police Academy continue training that began in February, 41 Action News was granted a peek into the process for preparing hopeful law enforcement officers for their careers. KANSAS CITY, Mo. — As the men and women of the 169th class of the Kansas City, Missouri, Police Department's Regional Police Academy continue training that began in February, 41 Action News was granted a peek into the process of preparing prospective law enforcement officers for their careers — and the ways it's been forced to change as society changes.

"I don't think a lot of people realize the amount of hours we put in when we’re off when we’re done with the academy." Dakota Lewis, an entrant officer at the academy, said. "At the end of the day, it’s more hours of work after that. We truly eat and sleep this job right now."

The minimum requirement for someone looking to become a peace officer in Missouri is 600 hours of training, but KCPD's academy involves around 1,000 hours of classroom instruction weaved together with hands-on training.

"It's really realistic — getting on the radio, knowing the procedures, what to say on the radio, focusing on the movement inside the car," Juan Garcia, another entrant officer, said.

At the end of every quarter, the recruits put it all into practice with actors who play criminals, victims and calling parties. Recruits are paired up to do six calls for service.

Capt. Brian Bartch is one of the leaders at the academy.

"These recruits are going be making mistakes," he said. "It's part of the learning process and so, at this point in time, (it's important) for them to be open-minded and, during the critique, ask questions — if they have questions — but to learn from the good things they did, but also learn from the mistakes."

These "practical exercises" include training that reflects current events, including an assist-an-officer call in which the arresting officer has a suspect on the ground.

"It took me a second to realize, 'Hey, he had his knee over there,'" Armon Rodgers, one of the entrant officers who went through the exercise, said. "I was like, 'Hey, why does he have his knee? Is he not in handcuffs? Is he still struggling to gain control over his head and then seeing that he had handcuffs?' I was like, 'OK, let me shift focus. You need to get off of him.' And then when the suspect continues to have that verbal altercation with the officer. I was like, ‘OK, now, you're being part of the problem. Let me just have you politely step over to the side so I can talk to you.'"

Another recruit immediately recognized that the exercise mirrored the circumstances of George Floyd's arrest — and death — during an encounter with Minneapolis police officers in late May.

"I knew that the officer, he was hyped up," Rafael Torres Castillo, another entrant officer, said. "He wasn't really rational all the time, so I was like, 'I'll probably have to take control the situation.'"

Training techniques and emphasis at the KCPD Regional Police Academy are constantly reviewed, updated and evolved.

“Our main objective is that the recruits — the entrant officers — intervene, take control of the subject and get the arresting officer away, give him a chance to calm down and sort of de-escalate the situation," Bartch said. "With what’s happened in the last couple months, obviously we've identified areas where we can always improve ... whether it's a technique or whether it's a thought process, whether it's the way we look at ethical decision-making. There's always areas where we can improve."

It's that type of training for which Rodgers is grateful.

"As an officer, that's potentially everything that you have," he said. "That's your career, that's your name and your livelihood and things like that. So, the fact that they take that in consideration with everything that they do for us, and even tell us other people's stories, it really emphasizes the important points that they place on us and that they want us to do well."

Eventually, all the classroom training and practical exercises will culminate with four days of "situational training" at the end of August, when these recruits will perform exercises back-to-back just before graduation.

"The community, they might have their doubts of us entrant officers coming into this law enforcement and in this tough time right now, but we talk about it every day," Lewis said. "This is an everyday discussion — how we can be better as officers? And so, we are here for the community."