Overland Park police have started issuing "tickets" as a reminder for drivers to lock their car doors and keep valuables out of sight.

OVERLAND PARK, Kan. — It’s a problem that could be easily fixed if people just locked their vehicles.

41 Action News recently tagged along with Overland Park police officer Brian Payne as he conducted courtesy checks of parked vehicles. According to the police department, doors are unlocked in three out of every four car break-ins.

On this night, Payne walked around parking lots at a hotel and an apartment complex. He peered into hundreds of cars and gave every one a ticket.

The “ticket” serves as a reminder to lock car doors and keep valuables out of sight, Payne said. Officers either check boxes indicating what the driver could do to make themselves less of a target, or they check a separate box praising the driver for their vigilance. That box reads, “If I were a THIEF, I would have moved on because your vehicle was properly LOCKED and UNINVITING to me!” 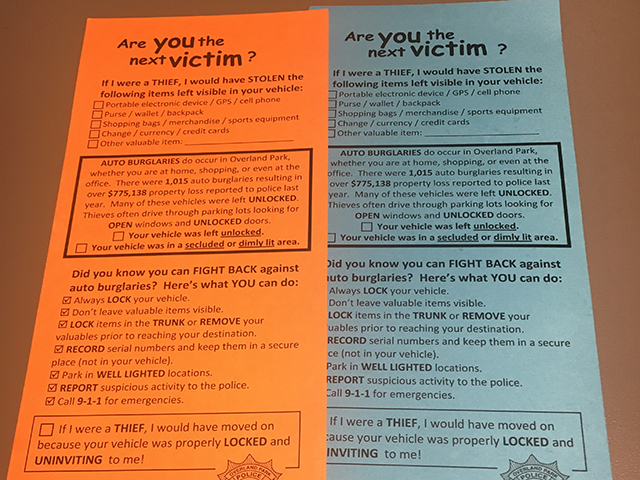 “Sometimes the window is more valuable than the electronic left in the car,” Payne said.

In 2017, roughly 69 percent of vehicles broken into were left unlocked, according to Overland Park police.

In 2018, officers said 75 percent of targeted cars have been left unlocked — which is why now through the holiday season, Overland Park residents may see an officer patrolling a busy parking lot and issuing tickets.