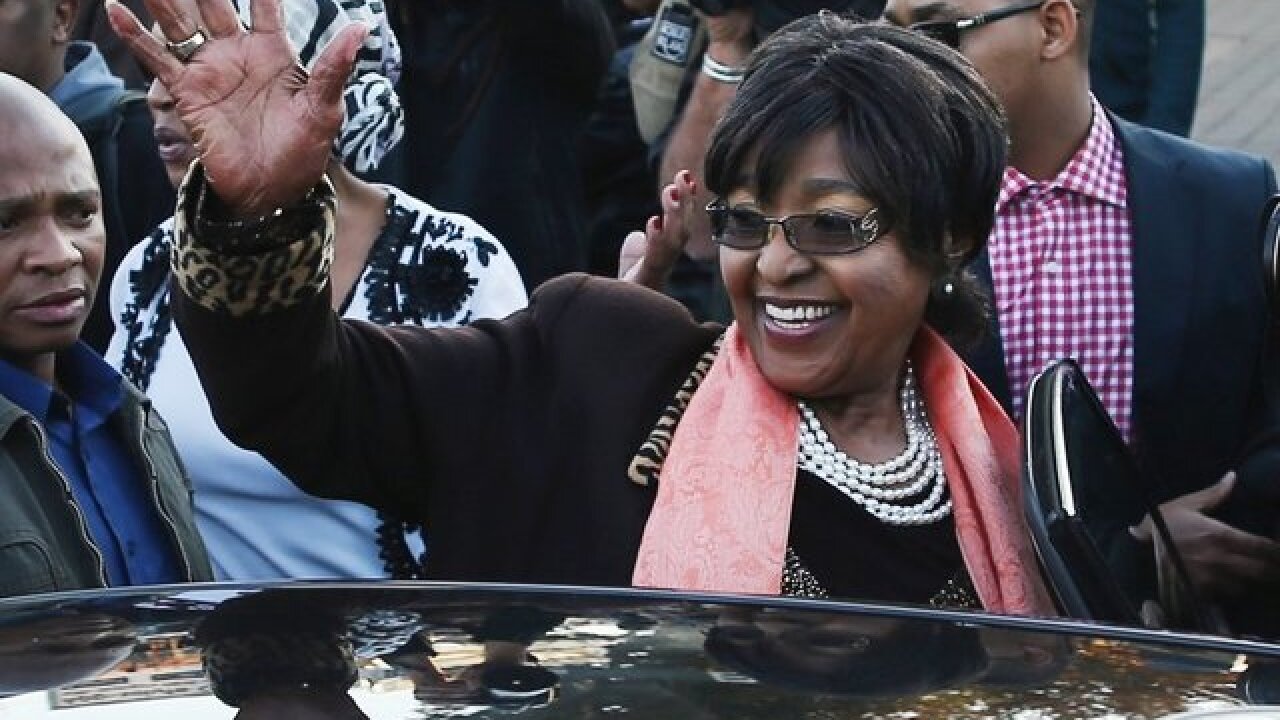 Crowds packed Orlando Stadium in Johannesburg's Soweto township for the funeral following a private service at her home.

Mourners followed her coffin in procession into the stadium, where the funeral began with the singing of the national anthem.

Her daughter Zenani Mandela-Dlamini was among the speakers at the funeral. Dignitaries included presidents of the Republic of Congo and Namibia, and civil rights leader Jesse Jackson.

"She made a choice to raise two families, hers and the beloved country," Mandela-Dlamini said. "She cherished freedom as much as she treasured family. She protected both from constant assault from apartheid state."

Madikizela-Mandela, the former wife of the late Nelson Mandela , died this month in a Johannesburg hospital after a long illness. She was 81.

As one of the country's most prominent and polarizing figures, she retained political clout long after her divorce from Mandela, the nation's first black President.

Since the end of apartheid in the 1990s, she served in several government roles, including member of parliament and leader of the ruling party's women's league.

"Today we lay to rest our heroine, a struggle stalwart and mother-to-the-nation," the government tweeted Saturday. It offered free rides for those who wanted to attend the funeral.

Thousands of mourners gathered Wednesday for a public memorial in Soweto, where Madikizela-Mandel lived for decades.

Mourners wore black, green and gold -- colors of the ruling African National Congress political party. Others wore T-shirts emblazoned with an image of her.

Deputy President David Mabuza described her as a visionary who championed reconciliation.

"You taught young women across the nation that they are just as capable, if not more capable, of standing shoulder to shoulder with men and being totally unapologetic about it," Mabuza said. "Till death, you knew who your enemy was: racial domination, class exploitation, gender oppression."

Madikizela-Mandela was married to Nelson Mandela for 38 years, including the 27 years he was imprisoned on an island near Cape Town.

While Mandela was imprisoned at Robben Island, she became his voice, providing regular updates to followers hungry for every little detail on his life.

When Mandela left prison in 1990, she stood next to him, one hand clasped in his as they raised their free hands clenched in fists -- a moment memorialized in a photo that became a symbol of his freedom.

While their marriage withstood the battle against apartheid, it couldn't withstand the pressure of freedom. Mandela accused her of infidelity and they divorced in 1996, two years after he was elected the first black president of South Africa.

At the time of her death, the longtime stalwart of the ruling party was a member of South Africa's parliament.

Ramaphosa described her as "an advocate for the dispossessed and the marginalized" and "a voice for the voiceless." Other civil rights icons from around the world around are attending her funeral, including the Rev. Jesse Jackson.

"Even at the darkest moments of our struggle for liberation, Mam' Winnie was an abiding symbol of the desire of our people to be free," Ramaphosa said in a statement. "In the midst of repression, she was a voice of defiance and resistance. In the face of exploitation, she was a champion of justice and equality."

Born in 1936 in what is now known as Eastern Cape province, Nomzamo Winifred Madikizela was the daughter of a history teacher.

As a 22-year-old social worker, she married Nelson Mandela in 1958, and stood by him in the years following his 1964 conviction and life imprisonment for sabotage and conspiracy to overthrow the government.

She led an international campaign calling for his release.

Outside Africa, she was known largely because of her ex-husband, but in South Africa she was the mouthpiece and face of the bitter struggle against the racist regime.

Although Madikizela-Mandela helped usher in a new, more equitable South African political system during her lifetime, she was also entangled in a number of scandals over the years. Her reputation was tainted by accusations of human rights violations that seemed sometimes at odds with Mandela's fight for inclusiveness. She was also accused of theft and kidnapping, which she denied.