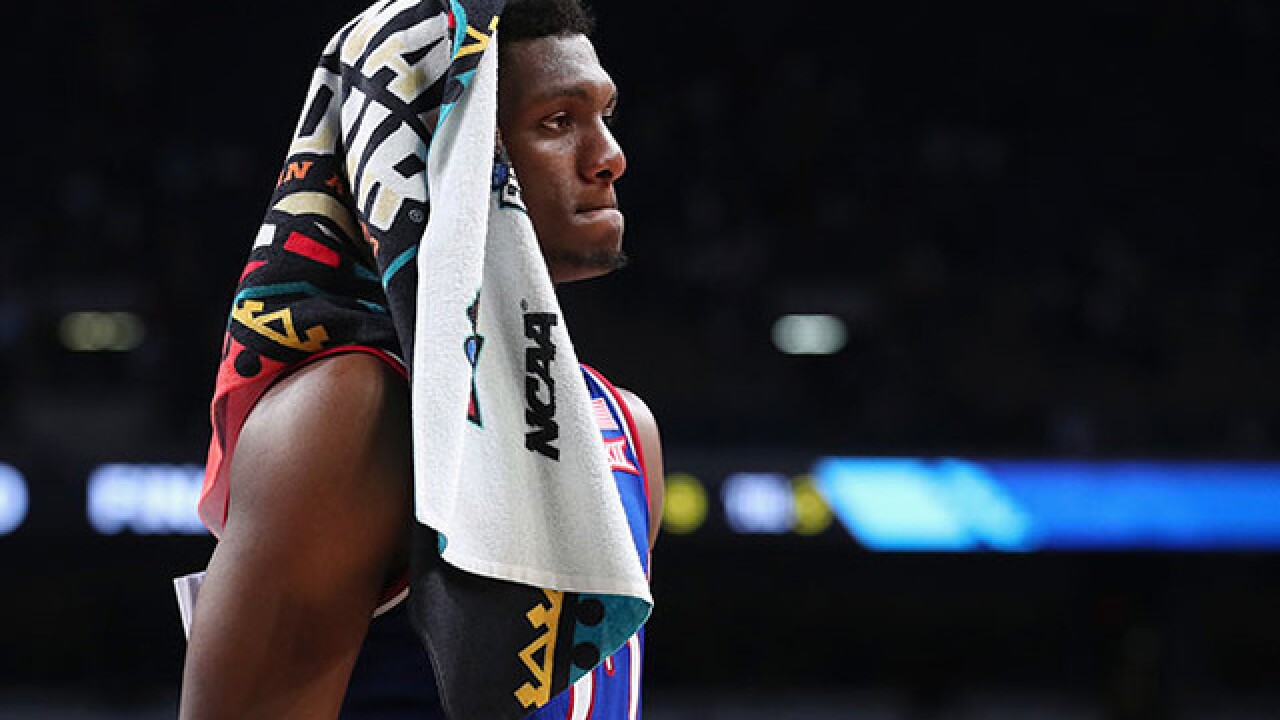 Copyright 2018 Scripps Media, Inc. All rights reserved. This material may not be published, broadcast, rewritten, or redistributed.
Tom Pennington/Getty Images
<p>Kansas forward Silvio De Sousa reacted after a loss to the Villanova Wildcats during the 2018 NCAA Men's Final Four on March 31, 2018 in San Antonio, Texas. De Sousa is being withheld from competition this season as the NCAA investigates his eligibility.</p><p> </p>

NEW YORK — NCAA President Mark Emmert said Wednesday that new rules allowing the use of information from legal proceedings will help in the investigation of college basketball corruption, though he cautioned that the inquiry is unlikely to be done before the men's tournament begins in March.

The first federal trial in the case in October resulted in the conviction of three men for wire fraud after testimony that implicated several schools, including Louisville, Arizona and Kansas, of being involved in payments to high school players. The trial was held in New York.

"There's been, I think, some confusion out there where some people have said the Southern District has now given you a green light to race forth and engage and that's a bit of a simplification to say the least," Emmert said during an interview at the Learfield Intercollegiate Athletics Forum.

Emmert did not attend the trial, though he said the NCAA had representatives in the courtroom. The NCAA is using an outside law firm to communicate with the FBI and federal prosecutors.

"There's still ongoing trials," Emmert said. "There's still investigatory work being done by the U.S. Attorney's office. We have to be very respectful of that process."

"We don't want to inadvertently obstruct any of that justice process. We're moving forward as assertively as we can, while still having to respect that process," Emmert said.

During the trial in October, a former Adidas executive admitted in court to paying the family of Jayhawks recruit Silvio de Sousa $20,000 to attend KU. The school announced last month de Sousa was being withheld from competition.

Defense attorneys also acknowledged that a shoe company representative paid former recruit Billy Preston's family. Preston was suspended before the 2017-18 season after being involved in a car wreck that triggered an NCAA investigation into who owned the vehicle.

Jayhawks coach Bill Self has denied any knowledge of improper benefits being offered to recruits.

Even before the NCAA dives into the information gleaned from the FBI investigations and the trials, there is work to be done internally.

Among the many reforms recommended early this year by a commission led by former Secretary of State Condoleezza Rice was a new independent body that would adjudicate major infractions cases. Emmert said "business leaders, former politicians (and) high-stature people the public will have confidence in" are likely to be on the panel.

Emmert said the new enforcement body could be in place as soon as August.

In the meantime, few schools have taken action to discipline players or coaches who have been implicated publicly.

"We need to make sure that schools are fulfilling their role and holding everybody accountable," Emmert said. "But the NCAA as an association of member schools is built upon the notion of collaboration and collegiality, and there's a notion among the schools that they will all hold themselves accountable. So to the extent that doesn't happen, I think all of the members are not happy with that."

Notre Dame basketball coach Mike Bray, during an interview session at the forum, said the lack of action has been notable.

"As a profession, coaches look at it and say, 'Wow, that's interesting,' maybe there should be more ineligible guys," Brey said. "But I sense that is coming."