Michael Porter, Jr. slides to Denver in first round of NBA Draft 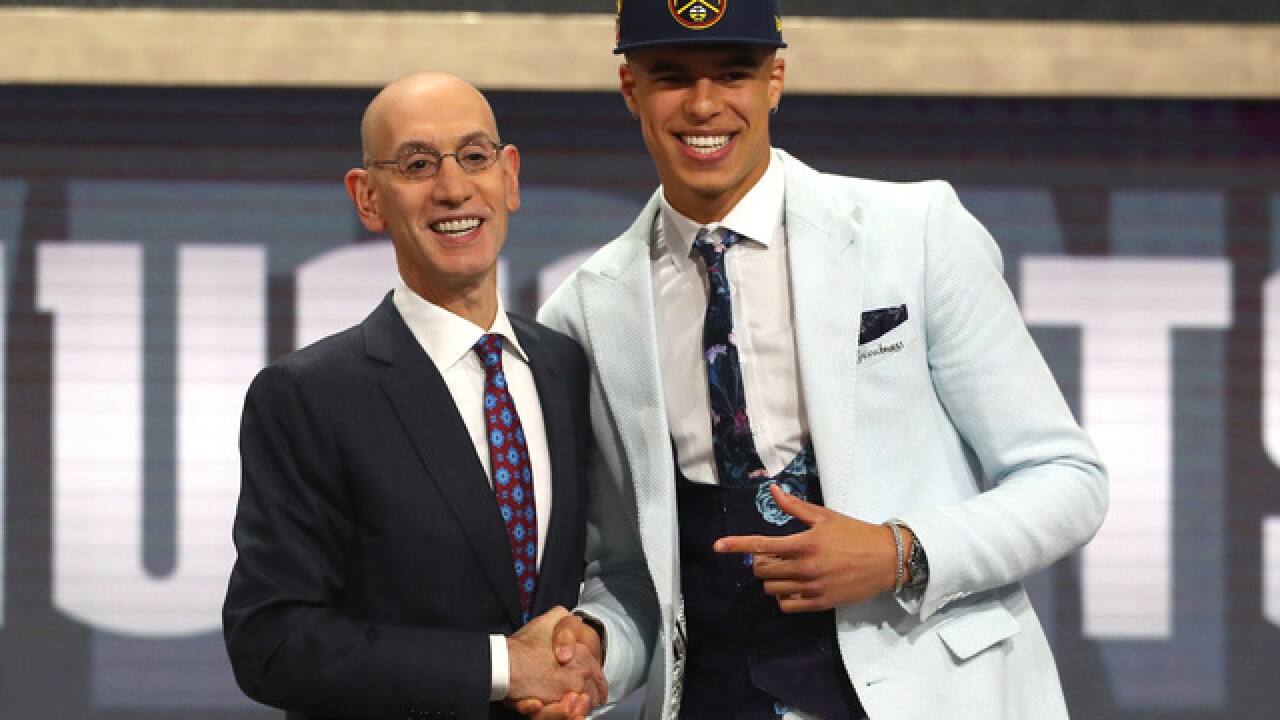 Copyright 2018 Scripps Media, Inc. All rights reserved. This material may not be published, broadcast, rewritten, or redistributed.
Mike Stobe
<p>NEW YORK, NY - JUNE 21: Michael Porter Jr. poses with NBA Commissioner Adam Silver after being drafted 14th overall by the Denver Nuggets during the 2018 NBA Draft at the Barclays Center on June 21, 2018 in the Brooklyn borough of New York City. NOTE TO USER: User expressly acknowledges and agrees that, by downloading and or using this photograph, User is consenting to the terms and conditions of the Getty Images License Agreement. (Photo by Mike Stobe/Getty Images)</p>

KANSAS CITY, Mo. — If Michael Porter Jr. was disappointed to slide out of the top 10 and nearly out of the NBA Draft’s lottery picks Thursday, it didn’t show as he beamed widely and pulled on a Denver Nuggets hat.

Porter, who became the evening’s biggest story as he waited until pick No. 14 to hear his name called inside the Barclays Center in New York, played forward for the University of Missouri last season.

“It’s a blessing,” Porter said on ESPN after he was drafted. “I’m so excited. … I don’t feel entitled to anything. It’s just a blessing and I’m happy to be a Denver Nugget.”

Porter was limited to three games after exiting the Tigers’ season-opening win against Iowa State in less than two minutes and undergoing back surgery last November. He averaged 10 points and 6.7 rebounds in very limited action, including losses to Georgia in the SEC Tournament and Florida State in the NCAA Tournament.

He was one of the top prospects in the high school class of 2017 and early projections had him as consensus top-three pick. He remained a highly-regarded prospect by draft analysts.

CBS Sports projected Porter as the No. 4 pick, while ESPN projected him to be drafted sixth and S ports Illustrated pegged him at No. 7.

Despite Porter nearly sliding out of the lottery picks, which are awarded to teams that failed to make last season’s playoffs, Porter is the highest player from MU selected since Keyon Dooling was chosen 10th overall in 2000.

“My path was a little different than everybody else’s, but I’m going to make sure that this pick for this organization is the best pick they’ve ever made,” Porter said.

Lingering questions about Porter’s surgically repaired back, which led him to cancel a workout for several teams this week, likely precipitated his slide to No. 14.

But Porter said he expects to play in the NBA’s Summer League and doesn’t plan to sit out the 2018-19 season.

“This just gave me an extra pep in my step, so I’m feeling good,” Porter said. Asked about his health, he added, “I have no concerns, man. I’m just happy to be with a team that believes in me.

Porter, who was the first McDonald’s All-American to sign with Mizzou and first since 2000, averaged 36.2 points and 13.6 rebounds as a high school senior at Nathan Hale in Seattle.

He swept the Gatorade National Boys Basketball Player of the Year, Naismith Prep Player of the Year and McDonald’s All-American Game MVP honors — joining Dwight Howard (2004), LeBron James (2003), Chris Webber (1991) and Alonzo Mourning (1988) as the only players to sweep those awards.

Before that, Porter, who moved to Seattle when his father became an assistant coach for Washington, lived in Columbia, Mo., and played for Father Tolton Catholic High.

“I’m a player that can do it all,” Porter said. “I think when I’m on the floor you always have a chance to win. I’ll never disappear on the floor, and I’m a winner. I’m going to help this team win.”

Porter was joined by his parents, Michael Sr. and Lisa, and younger brother, Jontay, in New York. He hugged each after the pick was announced before walking onto the stage to meet NBA Commissioner Adam Silver.

“All I can say is it’s a blessing,” Michael Porter Jr. said

Jontay Porter also declared for the 2018 NBA Draft in early April, but he withdrew his name and opted instead to return to Mizzou for his sophomore season in late May.

As a freshman, he averaged 9.9 points and 6.8 rebounds in 33 games and is expected to be among the Tigers’ top players next season.

Porter wasn't the only local player to hear his name called during the draft.

Shamet, who averaged 14.9 points and 5.2 assists, is the first Shockers player selected in the first round in the last 33 years since Xavier McDonald was the No. 4 overall pick in 1985.

Early in the second round, Kansas point guard Devonte Graham went to the Charlotte Hornets, who swapped two future second-round picks with Atlanta to move up, at No. 34 overall. He will back up veteran Kemba Walker.

Thirteen picks later, Graham’s former KU teammate — shooting guard Svi Mykhailiuk, a native of the Ukraine and one of the draft's top shooters — was selected by the Lakers at No. 47 overall.

Mykhailiuk, who averaged 14.6 points per game, shot a team-high 44.4 percent from three-point range.

Missouri State had a player selected 50th overall when the Pacers chose forward Alize Johnson, who led the Bears with 15.0 points and 11.6 rebounds per game. He ranked fourth in NCAA Division I in rebounding.