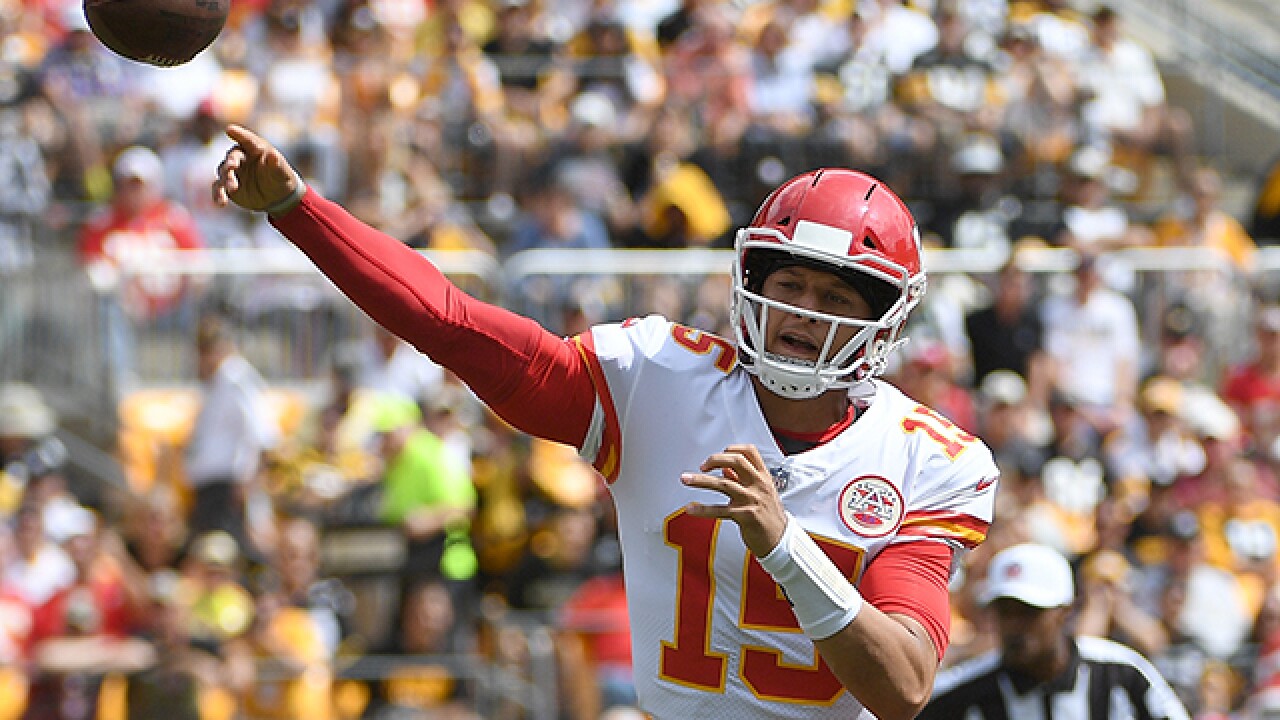 He was asked the kind of question that often earns a cliché or stock answer in reply, but Mahomes’ giddiness was apparent as he answered.

Mahomes has started three career games, but each has been a road game.

He’s won back-to-back AFC Offensive Player of the Week honors to begin his tenure as the Chiefs’ starting quarterback, but he’s never felt the love from local fans aside from a few preseason appearances.

That’s all about to change. And with the Chiefs unbeaten after Mahomes’ record-setting performance in victories at the Los Angeles Chargers and Pittsburgh Steelers to start the season, homegrown QB-starved fans in Kansas City are sure to provide a raucous reception.

“So, Pat, how much are you looking forward to playing a regular season game at Arrowhead?” a reporter asked.

“I am extremely excited,” Mahomes said. “I have had this game circled for a long time. Just being able to play at home in front of these fans, it is going to be an amazing thing. I can’t wait for the moment just when I get to run out on the field and hear those fans roar.”

According to Guinness World Records, the fans at Arrowhead are the loudest in the world.

Mahomes not only has passed every test that came his way, but he’s done so in spectacular fashion.

Before the last two weeks, no quarterback in NFL history had thrown 10 touchdowns in the first two games of the season — until Mahomes.

“He’s got a ton of room here to improve, but he’s doing a nice job,” Chiefs coach Andy Reid said of Mahomes.

Mahomes' preparation has been particularly impressive. Steelers defenders remarked that he was more advanced than expected, but it's not unexpected for Reid.

"When we brought him in we spent a bunch of time with him trying to exhaust him with that day you can spend," Reid said. "We came out of it knowing he can handle a load. He came in behind Alex (Smith); you weren’t going to run out of gigabytes with Alex. He’s right there. We haven’t slowed down with what we’re doing or anything else. ... He is where we hoped he would be.”

Still, it’s hard to believe Reid and the Chiefs could have expected such a quick arrival.

Consider the comments from another former Reid QB disciple, Hall of Famer and former Mahomes idol Brett Favre, on Sirius XM’s NFL Radio: “Mahomes’s talent is as good as anybody in the league now and has ever played the game.”

Not that Mahomes is buying too much into such talk.

“That’s awesome for him to say — someone I looked up to growing up and playing football — but there is still a long way for that,” Mahomes said. “I am just trying to keep getting better every single day and hopefully we can have a lot of success this season and hopefully further on from that.”

Understandably, Reid tried to temper the high praise rolling in Mahomes, who turned 23 on Monday.

It’s just not Reid (or Mahomes’) focus at the moment. That would be the 49ers, who present another tough test for the young gunslinger.

“There’s stuff that you can get better at every single week and I’m going to keep trying to get better as this year goes on,” Mahomes said. “… Coach Reid, he is always going to push me. He is never going to be satisfied with what I am doing and where I am at. That is how I feel about myself. You never want to be satisfied with one good performance. You want to make sure you sustain that for a whole entire season or a whole entire career. And I love that.”