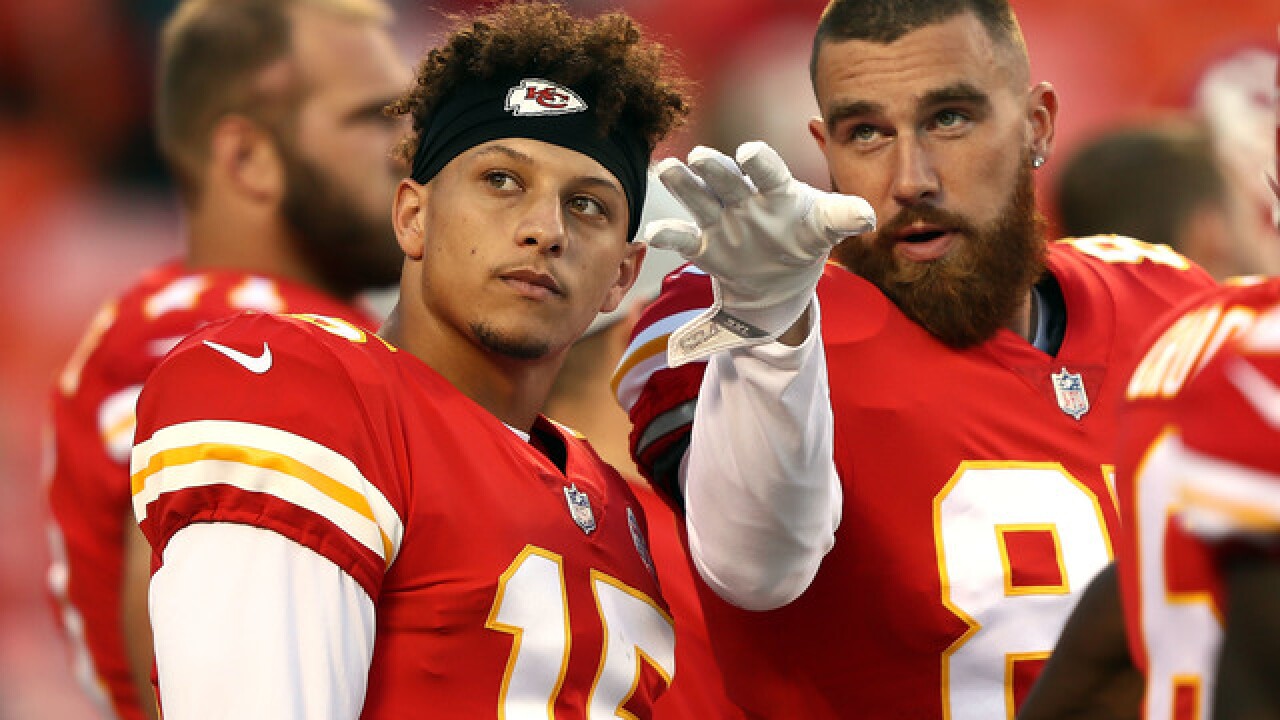 Copyright 2018 Scripps Media, Inc. All rights reserved. This material may not be published, broadcast, rewritten, or redistributed.
Jamie Squire
<p>Kansas City Chiefs quarterback Patrick Mahomes (left) and tight end Travis Kelce — pictured during warm-ups prior to an Aug. 30, 2018, preseason game against the Green Bay Packers at Arrowhead Stadium — promise to have some surprises in store for the Los Angeles Chargers' defense in the 2018 season opener Sunday at the StubHub Center in Carson, California.</p>

It’s a bit of a bummer that the season opener — indeed, the first two games — are away from Arrowhead Stadium, but that won’t tamp down enthusiasm much for a fanbase starved for a homegrown franchise quarterback.

There’s been lots of hype since the Chiefs traded up in the 2017 draft to nab Mahomes , who started the regular season finale last season at the Denver Broncos but didn’t become QB1 for Kansas City until Alex Smith was traded during the offseason.

And fans aren’t the only ones excited to see what Mahomes can do as an NFL starter.

“He’s willing to learn and work at it,” said backup quarterback Chad Henne, an 11-year NFL veteran in his first season with the Chiefs. “He has the right attitude. He comes in every day to work. You can see the big-play ability with his arm, and I think he’s made really good decisions this preseason. His accuracy is a lot better than what I thought, so the sky’s the limit and, if he keeps working at, good things will come."

Mahomes certainly hasn’t done anything during the last six months to temper that enthusiasm . He’s embraced the attention, risen to the occasion and projected an unflappable persona .

“I haven’t seen any nerves,” Chiefs coach Andy Reid said when asked how Mahomes is holding up this week. “I know he’s excited to play. … I haven’t seen anything that would tell you he’s nervous. He is a pretty confident kid in his ability, and I think he just wants to get going and play the game.”

The preseason combined with a road start against a divisional opponent last year helped him get past any butterflies.

Asked if he’s been nervous this week, Mahomes said, “Not necessarily. I’m just going out there and playing to win. I get to compete and play a sport that I love. I get to play with a lot of guys I have built great relationships with, so I am going to just go out there and have fun and hopefully win a football game.”

Mahomes expressed confidence in a “veteran offensive line” that has tangled with the Chargers’ fearsome pass-rush tandem of Melvin Ingram and Joey Bosa before.

He and tight end Travis Kelce hinted that Reid has cooked up a few surprise wrinkles on offense, as he always does heading into a new season.

“With the Patriots last year and then with now, you throw in some specialty plays that we have been working on in training camp that now we are getting to use,” Mahomes said. “I am excited to see those. Last year with the Patriots, they worked out pretty well, so hopefully they can work out again this season.”

Kelce couldn’t contain a wry smile when he was asked about new aspects of the Chiefs’ offense: “I don’t want to give away too much of the secret. It’s going to be fun to get out there. It’s new for everybody, so I think it’s something that really everyone can get excited about, even the fans.”

Mahomes said the plan is “to attack every aspect of the field.”

If teams want to play deep and guard against his arm strength, that should open up the run game and the short passing game for screens to Tyreek Hill or Kelce working one-on-one underneath.

If teams want to stack the box and take away Kareem Hunt and Kelce, that makes the defense vulnerable over the top to Hill and wide receiver Sammy Watkins, who signed a three-year deal worth $48 million during the offseason.

“We just have to make sure we keep the defense honest on every single play,” Mahomes said.
He also must make sure he doesn’t try to do too much.

Henne’s advice for Mahomes entering a potentially key AFC West clash: “Don’t put it all on your shoulders. I think you’ve got enough playmakers around you that you can rely on those guys as well.”

He also advised that Mahomes worry about what he can control and “ride the waves of the game” by relying on fundamentals and practice reps, but that may be easier said than done on some plays.

“You are really excited whenever you go into a game and you think that you have a play that you think will score a touchdown, which I feel like we have a ton of them,” Mahomes said.

Henne said he and Mahomes “watched 15 or 20 games and sometimes on repeat, so he’s prepared. It’s just all about going out and executing and being consistent.”

If Henne sees something during the game that could benefit Mahomes, he may share it on the sideline, but “the biggest thing is just don’t overload him,” Henne said. “Let him play. But if I see something I feel we can attack … I may tell him, so we can apply it to the next series.”

So, what’s Mahomes most looking forward to savoring from his first game as a franchise’s starting quarterback?

“Probably walking off the field hopefully with a win would be the best moment I am looking forward to,” Mahomes said. “Hopefully, we can go out there and compete on every aspect, every side of the ball — offense, defense, special teams — and come out with the win.”