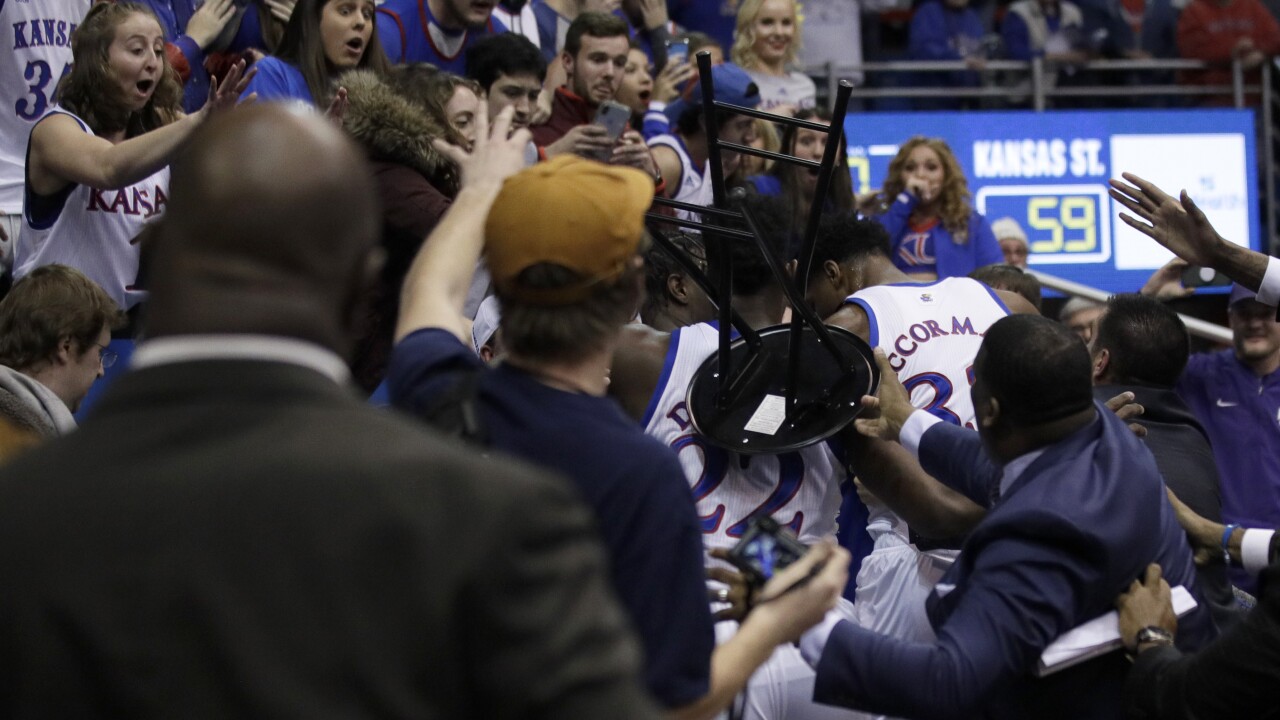 LAWRENCE, Kan. — Allen Fieldhouse is on the short list of the world’s greatest college basketball cathedrals.

But on Tuesday night during the Sunflower Showdown, it became the setting for one of the ugliest moments in the sport’s history.

If it had ended with Kansas State freshman DaJuan Gordon’s steal and attempted layup, which Kansas junior forward Silvio De Sousa rudely and roughly rejected, it would have been chalked up as two bitter rivals playing hard to the final whistle.

Of course, it didn’t end there.

De Sousa drew a technical foul for standing over Gordon after knocking him to the ground.

The benches cleared, punches were thrown and the melee spilled into the stands, where De Sousa briefly lifted a stool over his head before releasing it without swinging it at anyone in the crowded seating area.

Still, it’s a black eye for the Jayhawks, Wildcats and Big 12, which responded Wednesday by suspending four players — two each from KU and K-State — for a total of 25 games.

Pollard, an 11-year NBA veteran, has been part of his share of on-court dust-ups, often in his role as “an enforcer” during a pro career that spanned more than 500 games.

But he’s also familiar with the fallout from those fights.

“And it’s not good,” Pollard said. “Nothing good is going to come out of this.”

Missing players for key conference game will affect the team on and off the floor, but the image of De Sousa with a chair over his head will become omnipresent in connection with KU and opposing teams also will use the incident in recruiting.

“That’s an easy thing for opposing fans to put on posters whenever we come to town and use that picture to denigrate our program, and our illustrious program, forever," Pollard said. "A picture tells a thousand words, and that one’s about a million. There’s a woman grasping on for dear life on his leg. How horrible is that?”

Jayhawk GameDay Live co-host Jeff Gueldner, who played for KU from 1986-90, was at the game and expressed the same disbelief.

“You really can't believe what you saw,” he said. "It was just a mess. There is really no other way to put it, it was a mess."

It also was far worse than most on-court scuffles, spilling into a section of disabled fan seating as several players threw punches.

"Typically, what you see is chest bumping and maybe pushing and shoving, a bunch of cussing,” Gueldner said. "What happened last night is probably been unheard of in a college game. ... There is no way to spin this positively.”

Pollard refused to chalk it up to “boys will be boys,” noting that they are adults who know better and that it endangered fans.

With ESPN returning to Allen Fieldhouse on Saturday for the Big 12/SEC Challenge between Kansas and Tennessee, he knows the buildup to the game will remain focused on the brawl’s aftermath.

Pollard is hosting a bowling event Friday in Lawrence before the game and knows what will dominate talk among Jayhawks fans there, too.

“Instead of talking about the multicultural fund for the (KU) School of Education, which is what we do this for, I’m going to be talking about this all night,” Pollard said.

As lopsided as it has been, Pollard said understands emotions run high in a rivalry game, but that doesn’t excuse Tuesday’s incident.

“Competitive spirit is what makes rivalries great,” Pollard said. “One could argue that Kansas State was in the wrong for stealing that ball at the end of a 20-point game, and one could argue that De Sousa was wrong for chasing him down and blocking that shot. ... But the bottom line is they both made basketball plays, and they were both incredible basketball plays.”

Everything after De Sousa’s block — the taunt, the fists, the stomps and the chair — crossed a line.

“Two to tango, but I will say that the beginning, I think that was our side,” Pollard said. “You make the block and you walk back to the locker room, and none of this happens. But you stand over somebody in a 20-point game after you make the block, then you’re adding insult to injury and it turned into something else.”

Pollard doesn’t blame De Sousa completely, but he does think his actions — specifically the taunt and picking up the chair — were unnecessary and indefensible.

Based on the suspensions announced Wednesday, KU Head Coach Bill Self and the Big 12 agreed.

Kansas plays at Kansas State later in the season, a 12:30 p.m. tipoff on Feb. 29 at Bramlage Coliseum in Manhattan.