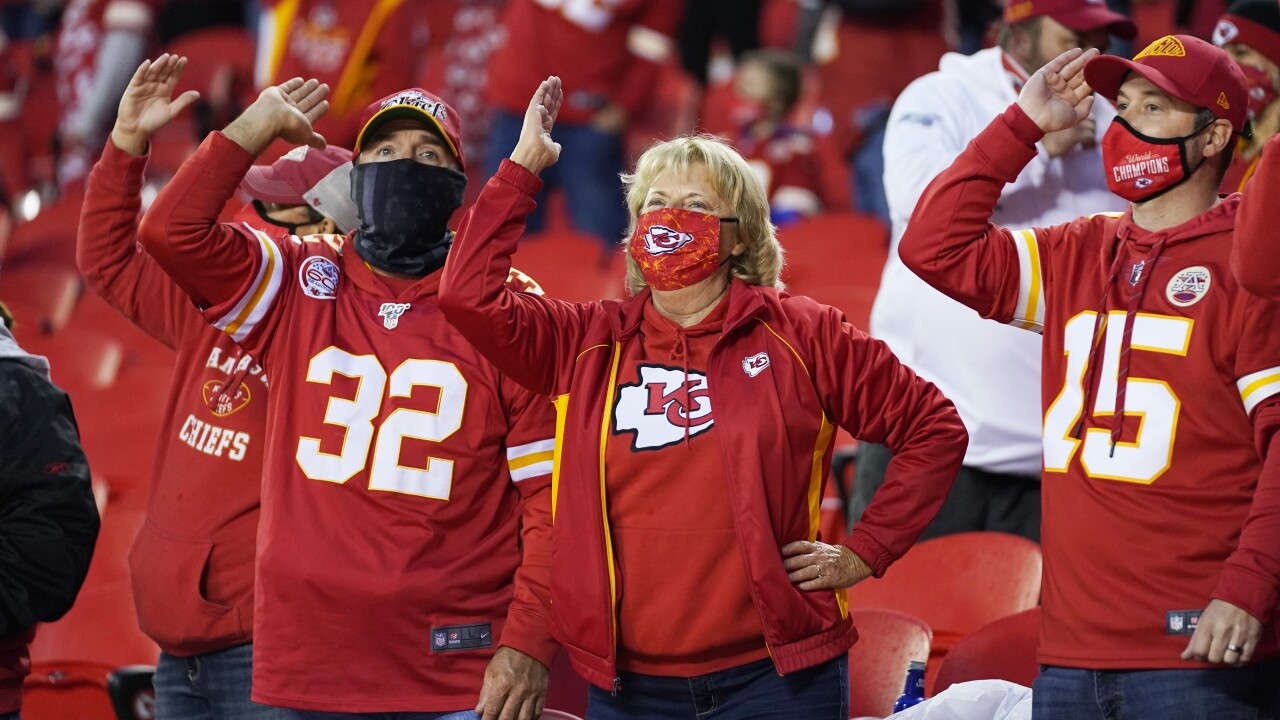 Jeff Roberson/AP
Kansas City Chiefs fans cheer in the first half of an NFL football game between the Chiefs and the Houston Texans Thursday, Sept. 10, 2020, in Kansas City, Mo. (AP Photo/Jeff Roberson)

KANSAS CITY, Mo. — As new restrictions related to the COVID-19 pandemic go into effect across the Kansas City region this week, no changes were announced to the revised attendance policies for Sporting Kansas City and Chiefs games.

Even while cases across the KC region continue to surge, Sporting KC will continue to have around 3,300 people at its playoff game Sunday and the Chiefs have averaged nearly 13,200 people for five home games this season, according to figures included in weekly box scores.

Even with gathering limits being tightened as schools and churches return to a virtual environment, those capacity limits aren’t changing.

“The short answer is there’s been no discussion about changing the plans for the last three games of the season,” Chiefs Chairman and CEO Clark Hunt said. “Obviously, everybody in Kansas City is concerned with the spike in cases.”

“If it was an indoor stadium, I might be in a very different situation,” Archer said Monday during a news conference to announce KCMO’s Safer at Home guidelines. “If the Chiefs were wanting to have groups of greater than 10 seated together in various places, then I would have a problem with that.”

Hunt said his staff, led by Chiefs President Mark Donovan, review procedures on a weekly basis with Archer, going over “what’s happened at our most recent games and what we can do to maybe improve the protocols on a go-forward basis.”

Sporting KC was permitted to have its stadium 14% full when the MLS regular season resumed in August, but the health department bumped up that capacity to 18% after a few games, a team spokesperson said.

Sporting KC has sold out the allotment of approximately 3,300 tickets for Sunday’s playoff game versus the San Jose Earthquakes at 3 p.m. at Children’s Mercy Park.

Both the Chiefs and Sporting KC require fans to wear masks, reconfigured seating to put fans in groups of seats with known parties socially distanced from other fans, rely on contactless payment and ticketing and have added hand sanitizer stations among other health and safety protocols.

The fact that they are working is another reason fans continue to be allowed at games.

Archer said they aren’t aware of any outbreaks at Chiefs games this season.

He also noted that people who congregate in suites at Chiefs games are required to get a COVID-19 test within 72 hours before the game.

“So, even though it’s more than 10 folks that would be in that suite, they have a mechanism,” Archer said. “We had over 1,000 tests at the last home game. There were 25 positive. Those folks were not allowed to go into the suites.”

Hunt is grateful the health department worked with the team to put a plan in place to allow some fans.

“Financially, it’s obviously better than having an empty stadium, but at the end of the day, it’s not a huge amount of money,” Hunt said. “I think really the bigger value is for the organization, for the team and the players. In having some fans in the stadium — and our fans as I’ve mentioned have done a great job of being as loud as they possibly can — makes it feel as normal as possible. It makes the players feel like we still have a home-field advantage.”

He also worries that, even if a vaccine becomes available soon, gathering restrictions could impact the 2021 season.

“I also think there’s some value in having fans this year as we look to next year, because, unfortunately, I think COVID’s going to be with us for a while,” Hunt said. “But the fact that we were able to have some fans this year, maybe we can build on that next year once we get to the season.”

The KCMO Health Department and the Unified Government Public Health Center allow residents, organizations and businesses to conduct events with higher capacity than restrictions if a mitigation plan is submitted to and approved by the local health department.