Weather Blog: A "Weather 180" this Weekend

We have been tracking two storm systems. The first one affected our weather Wednesday and Thursday and the second one arrived last night and is exiting today.

The first system is now tracking north over Hudson's Bay as it is being kicked by the storm currently near KC.

The orange in this satellite picture represents dry air. This storm is tracking southeast, to the south of KC, before it heads east. This allowed the dry slot to make it to I-70 around 5-6 AM. Then, the dry slot retreated back to the south. Usually when a dry slot surges north to I-70, it keeps on going as the storm tracks northeast. But, since this storm is tracking southeast, the dry slot began a retreat back south 7-8 AM. So, instead of the rain ending 7-8 AM, it will end this afternoon as we go back into the comma head.

Here is a loop of the radar from 1130 PM last night to 730 AM this morning. You can see the back edge of the rain head north to I-70, before shifting south.

Rainfall totals as of 830 AM were 1" to 2" in a band from south of St. Joseph to near Clinton, MO. This has been quite a soaking on top of the soaking from Wednesday and Thursday.

This storm has brought more flooding and severe weather to the southeast USA and the delta region of the Mississippi river. It looks like there were no tornadoes, but plenty of straight line wind damage.

We have pretty much avoided the worst from all the storm systems this season. Let's hope that continues, but we are still early in severe weather season which ends in the middle of June for our region.

24 HOUR RADAR ESTIMATED RAINFALL: You can see 3" to 6" of rain has fallen from Louisiana to Alabama.

SEVERE WEATHER REPORTS (FRIDAY APRIL 9TH): There were 366 reports total, all wind and hail. There were 0 tornadoes. The red house with a wave symbol represents a flooded road, or flood damage.

SATURDAY: The heaviest rain will be across northeast Missouri by 5 PM. Drizzle and some light rain may still be lingering around here as highs climb to around 55. The sun will be out not too far to the west allowing highs to reach 65-70.

SUNDAY: The colder air from the storm today will be retreating to the Great Lakes as new cold air heads southeast from the northern Rockies. This will put our area in a warmer zone. Highs here will reach around 70 with highs around 80 just to the southwest. If the new cold front is 2-3 hours slower, we will reach 75-80. The bottom line is that Sunday is a "weather 180" from today. The front will come through dry, and may come through without a cloud. The wind will be 5-15 mph from the southwest and then northwest.

Lows tomorrow morning will be 35-43. A patch of frost is possible in a few locations.

MONDAY: It will be cooler with lows around 40 and highs in the low 60s under a partly cloudy sky.

Tuesday through Thursday will be dry with highs 55-65 and lows 35-45. This is near to 10 degrees below average. Our next rain chance after today, arrives next Friday. We will look at the week ahead in more detail in Sundays blog. 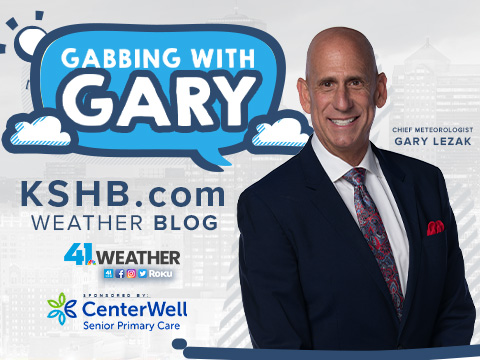