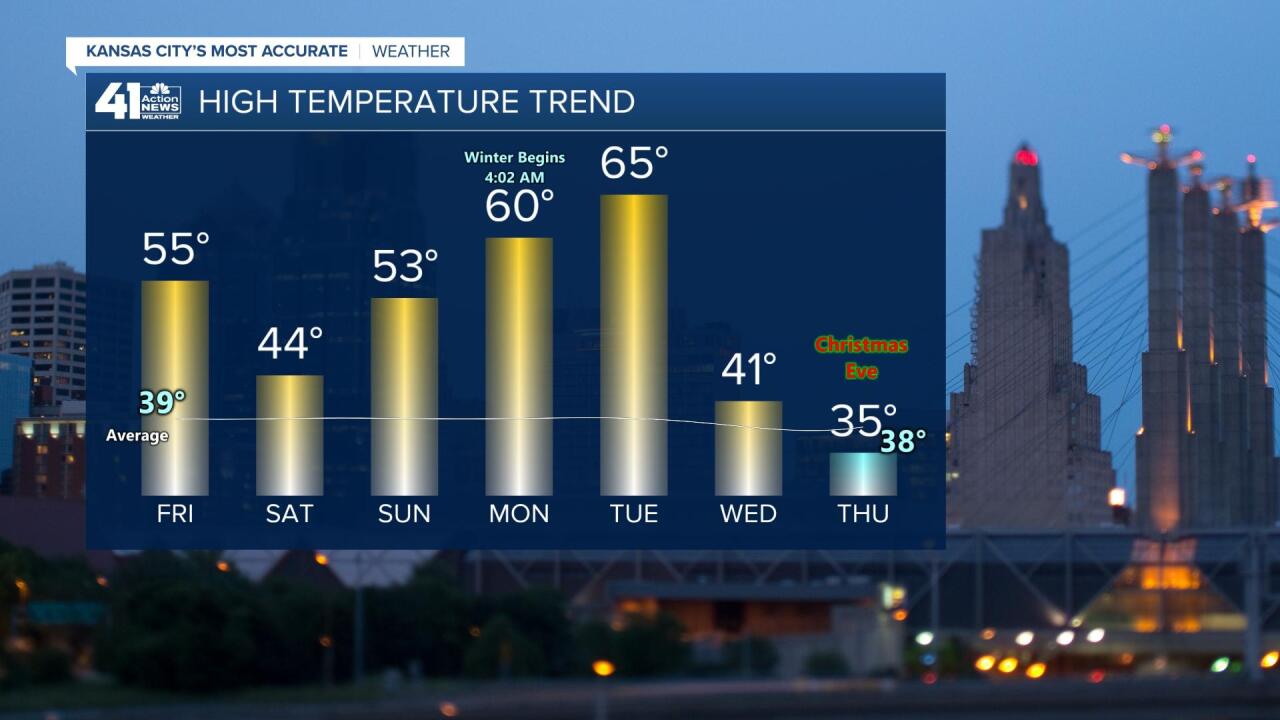 Christmas day is one week from today. On one hand it is like wow time is flying, and on the other, not so much. Between now and Christmas day the seasons will change and we have some changes in the weather. Will the changes lead to a White Christmas?

TODAY: We are in a small Wind Advisory as winds will gust from the south to around 40 mph. Usually when we have a windy day it is a regional event. Today that is not the case.

The south winds will take our highs to 50-55. We will have high clouds as a storm system approaches from the west.

SATURDAY: This shows why we have been getting missed by the storm systems. The moisture from the Gulf of Mexico that lights up these storm systems with precipitation has been meeting the systems east of our region. The next 24 hours will be no exception. Heavy rain and thunderstorms will occur across eastern Texas, southern Arkansas and Louisiana. Showers will occur across eastern Missouri.

We will see less wind on Saturday with highs in the 40s. There will be clouds during the morning and a return to 100% sunshine by afternoon. The wind will be NW to W 5-15 mph.

SUNDAY: It will be mostly sunny with highs 50-55 as winds turn to the west and southwest at 5-15 mph. It will be a nice last day of fall.

MONDAY: Winter begins at 4:02 AM and highs will come close to a record high. The record is 63 set in 1893. We may fall short as a system to our north brings in a very weak front. If the front is a no show, we will set a record high on the first day of winter. It will be a sunny day with highs around 60.

TUESDAY: The first full day of winter will see highs in to the 60s. The record is 67 set in 1933. So, we will come close again. It will be another sunny day, but windy from the south with gusts to 30-40 mph. The first of two cold fronts will be moving into the northern Plains.

WEDNESDAY: The first cold front will race by with highs in the 30s. The morning may see temperatures in the 40s. It is looking like a dry frontal passage.

CHRISTMAS EVE: A second blast of cold will arrive on Christmas eve and you can see there is one snow shower in northeast Missouri associated with the second cold front. Temperatures will likely be in the 20s, but the official high may be in the 30s early in the morning ahead of the second cold blast.

You can see, at this time it looks like a mostly sunny Christmas day, but you can see above, it will be cold. So, the chance of a "White Christmas" is near zero percent. If the storm associated with the first cold front can slow down and be stronger and/or the smaller system with the second blast is a bit stronger then we get a "White Christmas." We know how the storm systems have been acting this season, missing us. We will keep watching this as it is a week away.

The snow totals so far this season lay out rather odd. Amarillo, TX has seen nearly 13" of snow, Goodland, KS is at 15" of snow with Des Moines at 12" of snow. Central Kansas to most of Missouri to Chicago has seen under 1" of snow. Usually when we have a weather pattern that can produce that much snow in the western Plains, we get more snow than what we have seen. Quite odd for sure. Gary has been talking about the AO (Arctic Oscillation) that is going negative. When that happens we see more blocking at high latitudes around Greenland. This can force storm systems to slow down and track farther south. The AO is going negative, so we still have to watch the systems at the end of next week and subsequent systems into the first 10 days of January.

Between today and Christmas Eve, we will see above to much above average temperatures. The average high the next 7 days drops from 39 to 38.