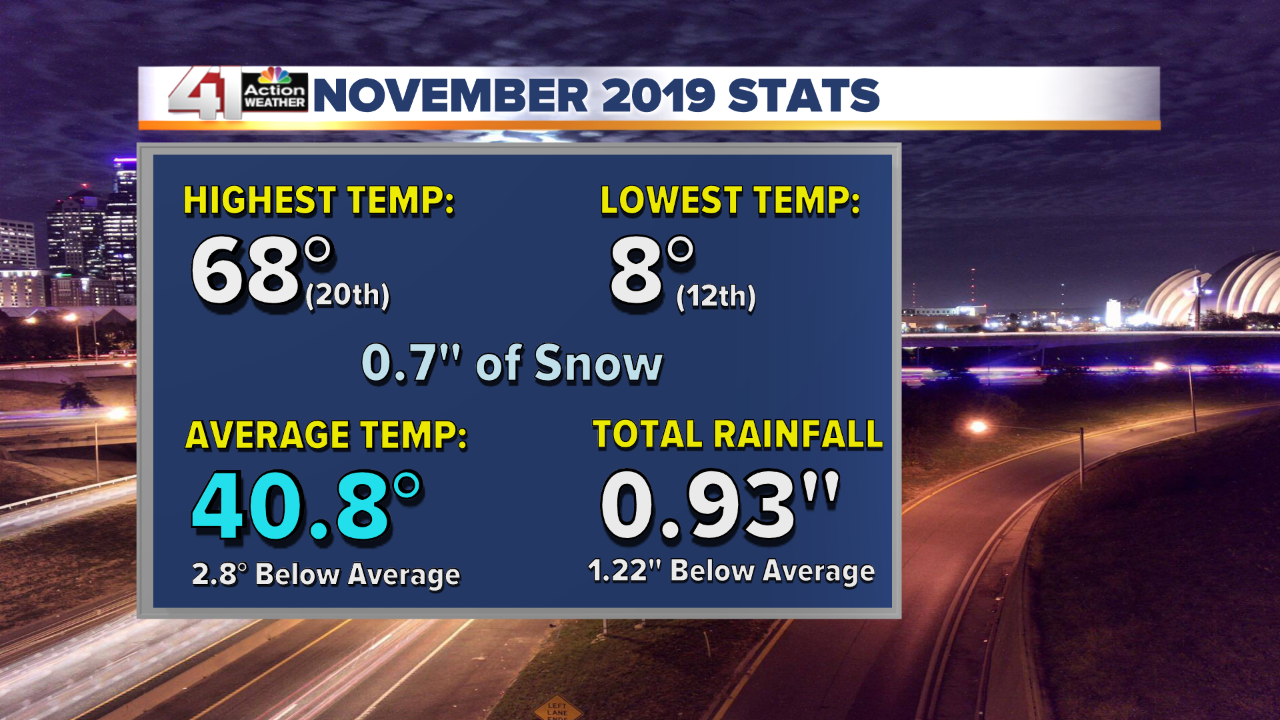 It is hard to believe that it is December. Time seems to be flying. The first day of December is the day we look back at November, which is why we call it "November Statistics Day." Officially we ended up nearly 3° below average for the month with rainfall 1.22" below average. These statistics are taken at KCI airport. There were many locations along and east of I-35 that saw more rain. South Overland Park received 1.98" which is just 0.17" below average.

The first week of December will feature a calmer weather pattern after this current storm exits. This current storm is a big one and has prompted Winter Storm Warnings to be issued from South Dakota to New England. We are dealing with the wind. Even though the Wind Advisory ends at noon, winds will still gust to 30-40 mph from the northwest all day.

SUNDAY:
There are also Winter Storm Warnings on the west coast as a storm system sits just offshore. So, there are many large airports being affected by rain, snow and wind. So, plan for flight delays and hopefully, they won't be that bad. If you are driving north on I-35 or I-29, roads could get slick north of I-80 as a snowstorm winds down.

We will see a clearing sky with decreasing wind tonight. It will be in the low to mid 20s Monday morning with a 5-15 mph wind. This still brings wind chill values down to 5°-15°.

MONDAY-WEDNESDAY: The weather looks much better with highs in the 40s Monday and 50s Tuesday and Wednesday. There will be abundant sunshine and not that much wind. The big storm that will bring significant winter weather to New England later today, Monday and Tuesday will exit by Wednesday. The storm off of the west coast will weaken and move east.

THURSDAY: The storm on the west coast today through Wednesday will weaken and race east, so that by later Thursday we could see some rain. This is not a big storm and it is our one main chance of precipitation the next 5-7 days.

Friday into next weekend look decent, but a more active pattern is looking likely for the second week of December into Christmas. A storm could arrive as early as next Sunday.

Have a great week ahead.