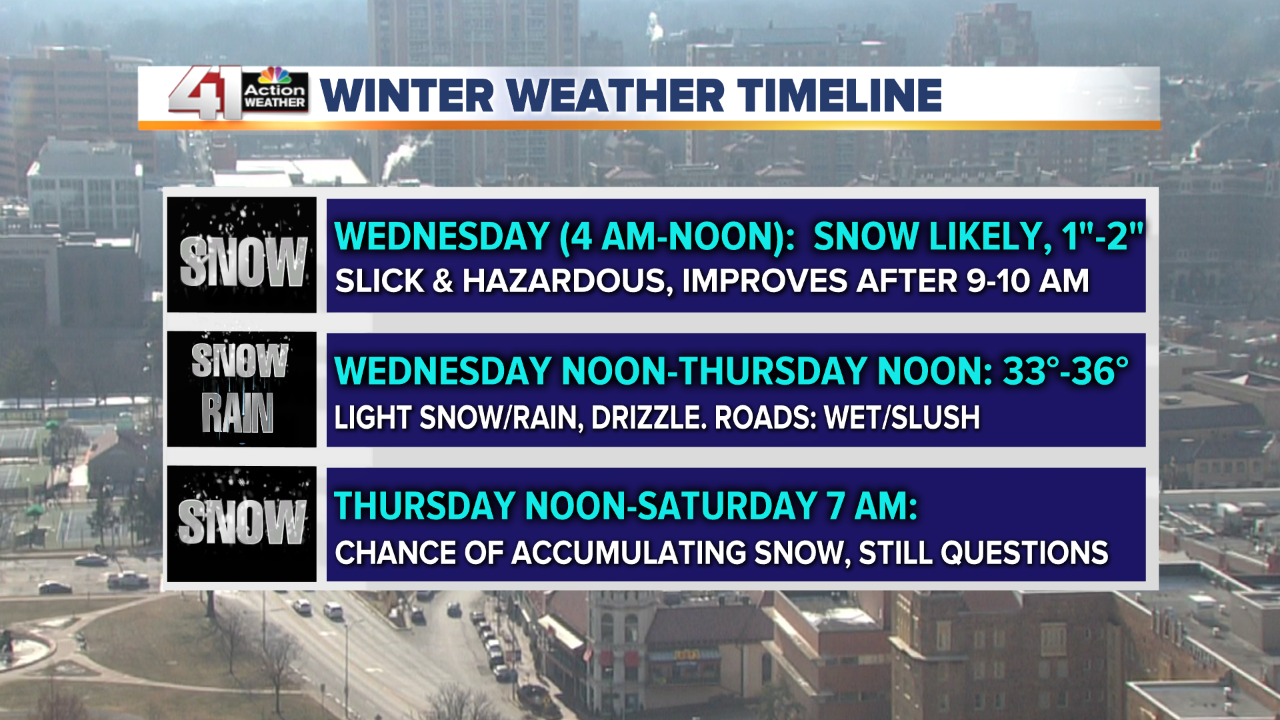 It is the third straight week where we are dealing with a complex winter weather situation. We are tracking two storm systems. The first storm arrives early Wednesday and exits Wednesday night. The second storm system arrives Thursday afternoon and exits Friday night. Let's go through this day by day, hour by hour.

We had a small system Monday that brought KCI 0.6" of snow, which is the official recording station for Kansas City. This brings our season total to 9.9". We will likely add to this total by Friday.

NOW TO MIDNIGHT: A mix of rain and snow will increase to our west before midnight as we stay dry with temperatures 28-31 this evening. This mix will change to all snow as it enters eastern Kansas.

WEDNESDAY MIDNIGHT-7 AM: The mix will change to all snow as it enters eastern Kansas. Temperatures will be 30-32 and so roads will likely become slick and hazardous shortly after the onset of the snow. This is the set up for a slick morning rush hour.

WEDNESDAY 7 AM-NOON: The snow will continue as temperatures rise to 32-34. This means after 9-10 AM roads will start to improve as not only do the temperatures rise, but the sun's radiation will warm the roads.

WEDNESDAY NOON-THURSDAY 7 AM: We will likely see a mix of rain showers, snow showers and drizzle with temperatures 33-36. The roads will improve becoming wet with slushy areas.

SNOWFALL FORECAST THROUGH WEDNESDAY: We are expecting 1"-2" of snow by noon Wednesday followed by little to no accumulation. It is not your typical 1"-2" band of snow. You can see the amounts are all over the place, mostly in between 1"-2", give or take 0.5". The reason is that the snow may come with scattered heavier showers and also some locations may see the snow change to rain.

THURSDAY 7 AM-NOON: The rain/snow showers will become more snow. Temperatures will be 32-35. Roads will stay wet with slushy spots. The second storm system will be evolving.

THURSDAY NOON-FRIDAY NIGHT: The second storm will be getting its act together and an area of snow will be forming on its northwest side. The area of snow will be capable of producing several inches of snow. But there is still a big question. Where will the storm get its act together? If it forms in eastern Kansas, becoming more mature by the time it enters Missouri, then we could see several inches of snow. If it forms in Missouri, getting its act together in Illinois, then we will see some light snow with little to no accumulation as it moves away.

Have a great rest of your week. Stay with 41 Action News and we'll keep you advised.