Weather Blog: KC to see coldest air since May 11 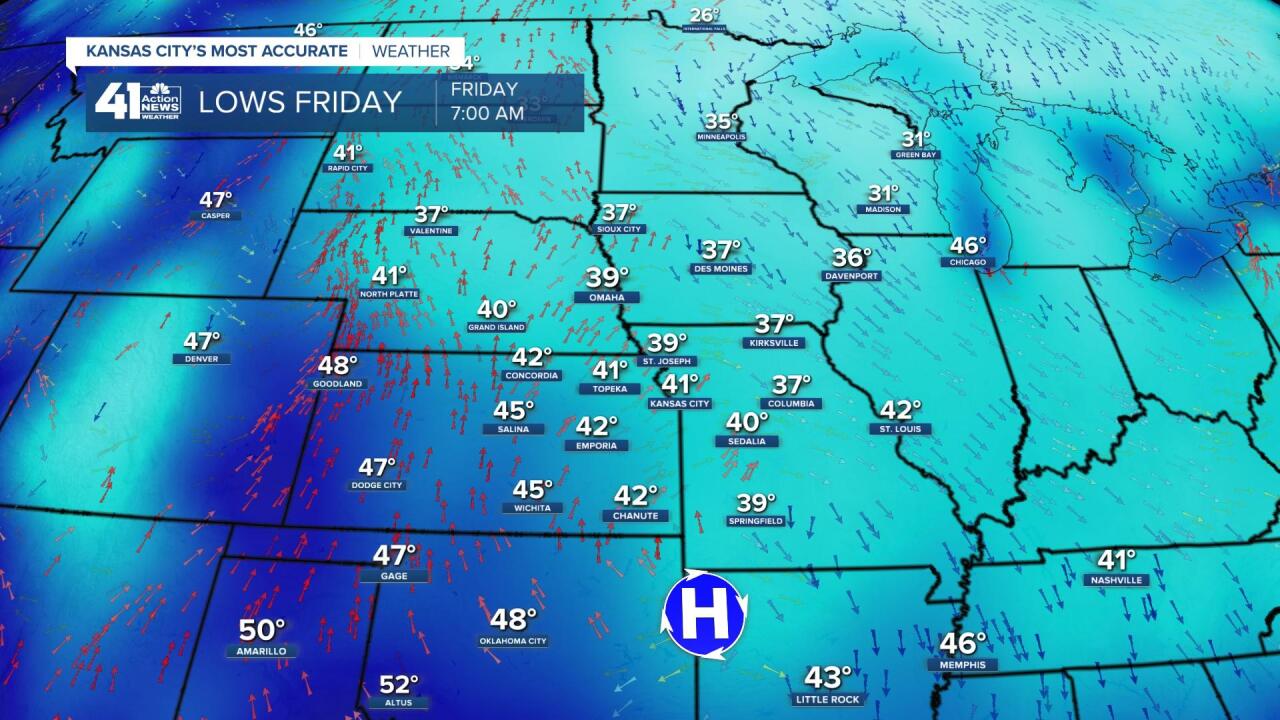 We are having some great fall weather after the Sunday storm system and cold front. If you like this weather, it is going to be around for awhile. It might even get a bit on the cold side for a night or two. You say, of course this weather will stick around awhile, it is fall. My response is yes, you are right, but you can still have highs in the 80s as late as the middle of November. We do not believe we have seen the last of the 80s, but it is going to be at least a week.

The weather pattern is set up in such a way where cold fronts and systems, with little to no rain, are racing south from northwest Canada. We are in a northwest flow from northwest Canada, so you get these fast moving systems that do not have time to pick up moisture until they reach the eastern USA. They track southeast into the Plains and then east to the east coast. Unfortunately, a large upper level high, which can create heat waves during the summer and early fall is planted on the west coast. This means no relief from the western fires in California and Colorado.

The Sunday cold front and storm system did clean the smoke out of most of the USA. You can see much smoke in California moving out to the Pacific Ocean. This smoke may eventually work its way back east. Also, fires in Colorado may pick up and spread smoke our way. So, enjoy the beautiful blue sky.

Here is the rainfall forecast for the next 7 days. The western 1/2 of the USA will be dry with heavy rain on the east coast. We are on the western edge of the rainfall. It depends on the actions of a Saturday system which we will talk about below.

We are going to finish September rather dry, about 3" below average. So, if you are trying to get some grass seed to grow or you need to fertilize, the sprinklers will be necessary.

TUESDAY: Warmer air will be surging east across the Plains. It will not get here fast enough to take advantage of the daylight, so we will see highs near 70 with highs near 80 just west of Topeka. All this means is some great fall weather. The wind will be west-southwest at 5-15 mph along with abundant sunshine.

WEDNESDAY: As stated above, systems are moving fast and a new cold front will have raced through during the afternoon. The cold air is lagging behind the front and there will hardly be a cloud in the sky. So, we should reach the low to possibly middle 70s as northwest winds increase. Highs will be in the 50s north of I-80.

THURSDAY: There will be plenty of sunshine, but highs will struggle to 60 along with northwest winds at 10-25 mph.

FRIDAY MORNING: Lows may reach the 30s for the first time since May 11th when we dropped to 37. May 12th was 42 and this morning we had a low of 43. So, this morning was the coldest since May 12th. A low in the upper 30s is just warm enough to keep widespread frost away. In low lying areas, lows could drop to 35 as winds will be light. So, seeing patchy frost on Friday morning is not out of the question.

FRIDAY AFTERNOON: The next system is already racing in from the northwest. We will see highs in the 60s with 70s in western Kansas. Look at the highs in Wisconsin, 40s! We will have some afternoon clouds.

SATURDAY: The system races by and we will see clouds with perhaps a shower or thunderstorm. The system is moving so fast that it will not pick up enough moisture to be a decent rain producer until it gets east of the Mississippi river. We will see highs in the 60s. Another shot of colder air will come in behind this system.

It's hard to believe that October is around the corner. Here is a look at the October averages for KC. Our average high drops from 73 to 61. Our average low drops from 51 to 41. So, our low of 43 this morning was average for the end of October. We also lose 1 hour and 12 minutes of daylight. Daylight Savings Time ends November 1st. We should see some beautiful fall foliage.

The seasons are a changing!