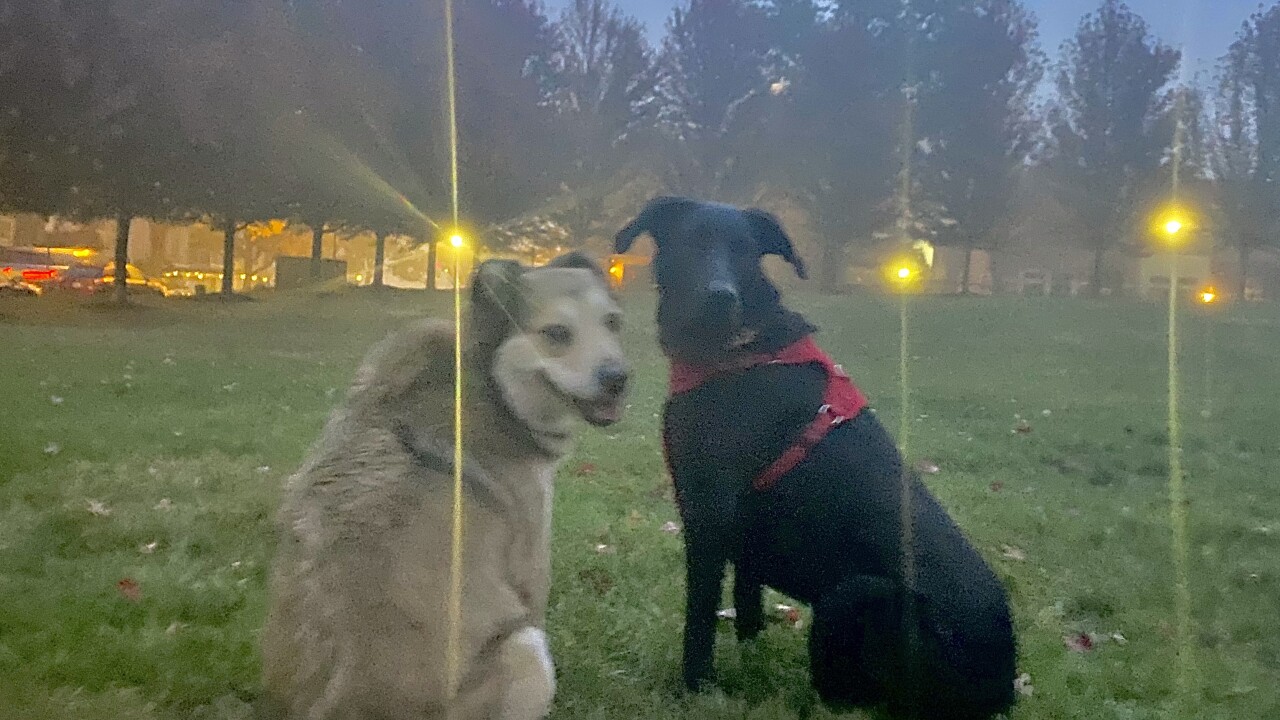 The weather pattern is becoming even more interesting in the next few days. Here are the headlines:

Sunny The Weather Dog & Rainbow posed for this early morning foggy picture. The visibility was down to less than 1/4 mile and near zero visibility in a few spots.

This fog will lift, and then the warm up is on the way.

The chance of snow is showing up on many of the computer models. It has snowed two straight years in October. Kansas City has never had measurable snow during October in three consecutive years. Well, a chance is showing up, and there are big differences in the computer models. This first image shows the latest American Model, or GFS model, and the second map shows the European Model snowfall forecast for the next week across the USA:

On this GFS model (American model) above you can see 3" to 8" of snow predicted to happen around Monday. Below, the European Model also shows snow forecast for our area, but only a dusting to 1/2":

For it to snow there has to be almost a perfect combination of colder air, enough moisture, and rising motion to cause it to snow. This rising motion is created by upper level energy around 10 to 20 thousand feet above us to set up in such a way that will cause rising motion which will help create precipitation. It has been difficult for us to have any rising motion to produce rain in the past 40 days, as we have had only one day of measurable rain since September 12th. I have been analyzing the data, and the solutions vary way too much for me to get too excited for any accumulation of snow.

So, why is this such a difficult forecast. Well, first of all, as I said earlier, it has never snowed measurably three years in a row in October. We have had a couple of big snows in our history during this tenth month of the year, however. But, it is not easy for the conditions to come together for it to snow this early. I really need another couple of days to see how these models trend. The storm causing the chance of snow is really stretched out and strange. At the same time, this is how we get some of our snowfalls.

Look at Denver on Sunday:

I was just on Sports Radio 810 WHB discussing the forecast for the Chiefs game at Denver. Woe, take a look. That is snow in Denver and temperatures in the 20s at best. And, this will come after it is nearly 70 degrees on Saturday there. Kansas City will be turning much colder Sunday into Monday too, and look at the GFS model (American Model) valid one day later on Monday:

If this solution is correct, then inches of snow would fall in our area. But, is it correct? I am strongly suggesting that it is likely wrong, but it is a possibility. So, we will pay close attention to this. Our weather team will be working very hard to get the best weather forecast prepared for our newscasts today and tonight.

The rain showers and thunderstorms forming this morning are just two counties south of KC. They may drift north a bit during the day. The chance of rain is 40% in the city, but obviously 100% down south.

Thank you for spending a few minutes of your day reading the weather blog, featuring the LRC. We will go in-depth on 41 Action News today and tonight, and we will update the blog if any changes show up. Have a great day!