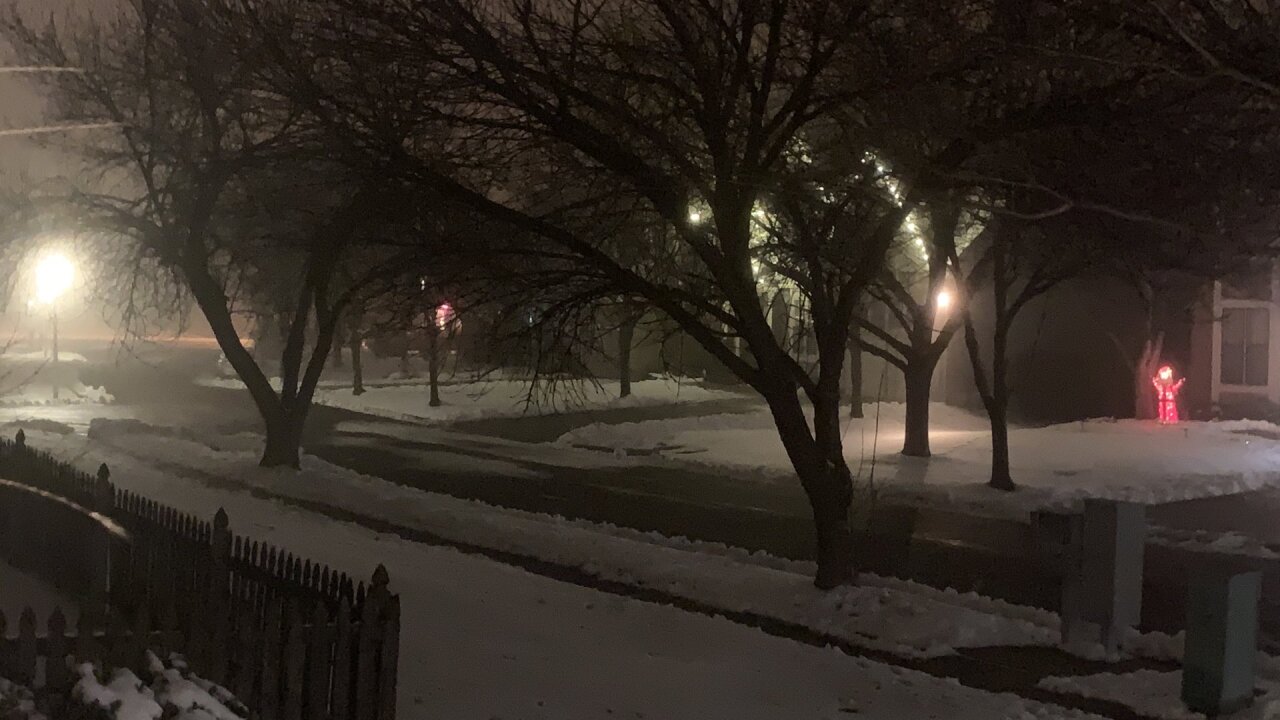 We are having our second straight foggy morning which makes for some picturesque winter scenes. It is not as cold this morning as it was Sunday morning, and temperatures have risen to just above 32 degrees reducing the slick spots. With temperatures rising, we didn't have the frost we had yesterday morning, which was called "Hoar Frost". Hoar frost forms in little needles on trees and grass blades.

Here are the visibitities at 6 AM, but, they have been improving in the past couple hours across the area. There is a lot of pea soup out there.

This will be our last day with dense fog for awhile as we turn our attention to the return of the sun and one storm system this week. Let's go through the week day by day.

Before we look ahead this week here is the current state of snow cover across the USA. You can see the band of snow from the January 1st storm. It extends from southwest Texas to Kansas City to Milwaukee. There has been melting in northwest Texas, hence the gap in the line. There is also much snow cover from the Dakotas to New England as one might expect in early January. What is a bit odd is the lack of snow cover from Montana to the western Dakotas.

Here are the latest seasonal snow total across the middle of the USA. Bismarck, ND is at 7.8" of snow. Average by this time of the season is 21.1" for that city. So, they are quite a bit behind for the season. Kirksville, MO is still at 0.0" and St. Louis is still at 0.3". We have crept up to 3.3". Chicago is now over 1" of snow. This occurred since December 29th just like our area. The big snow totals are found across central and western Kansas, Oklahoma, the Texas panhandle and across Nebraska, Iowa, Minnesota and western Wisconsin.

The last two storm systems did wonders for our percentage of average rainfall during the last 30 days. December 28th many locations were sitting at under 10%. Now, most locations are over 100%. This is, on average, the driest time of year. So, this is not a lot of precipitation. We will take what we can get. Could we see more precipitation this week? Now let's go day by day.

TODAY: A weak system will move by this morning taking the clouds and fog with it. This afternoon will likely become sunny with highs nearing 40. The wind will be light and you will need the windshield washer fluid as the snow starts to really melt, water runs into the street and gets splattered on your windshield.

TUESDAY: It will be a nice day with lows in the 20s and highs in the 40s. Clouds will increase later in the day as our next storm system emerges out of the Rockies. It will produce just a few snow showers in the Rockies as it will not get its act together until it gets near our region.

WEDNESDAY: The storm is forming as it moves by and then turns southeast. You can see a comma head formation, but with just small areas of rain and snow. Bigger thunderstorms are near the Gulf coast. Right now this does not look like a big storm for us. Highs Wednesday will be around 40 and we will have a chance of some rain. The faster it forms, the more rain we will see. We could also see no rain if it forms farther east.

How fast the storm gets its act together will be very important in determining which scenario plays out. Regardless, the storm will exit Friday. A new system is possible next Sunday-Monday.

Have a great first week of 2021 and stay healthy.