Weather Blog - Denver Will Go From 100° To Snow: A Major Weather Change Next Week 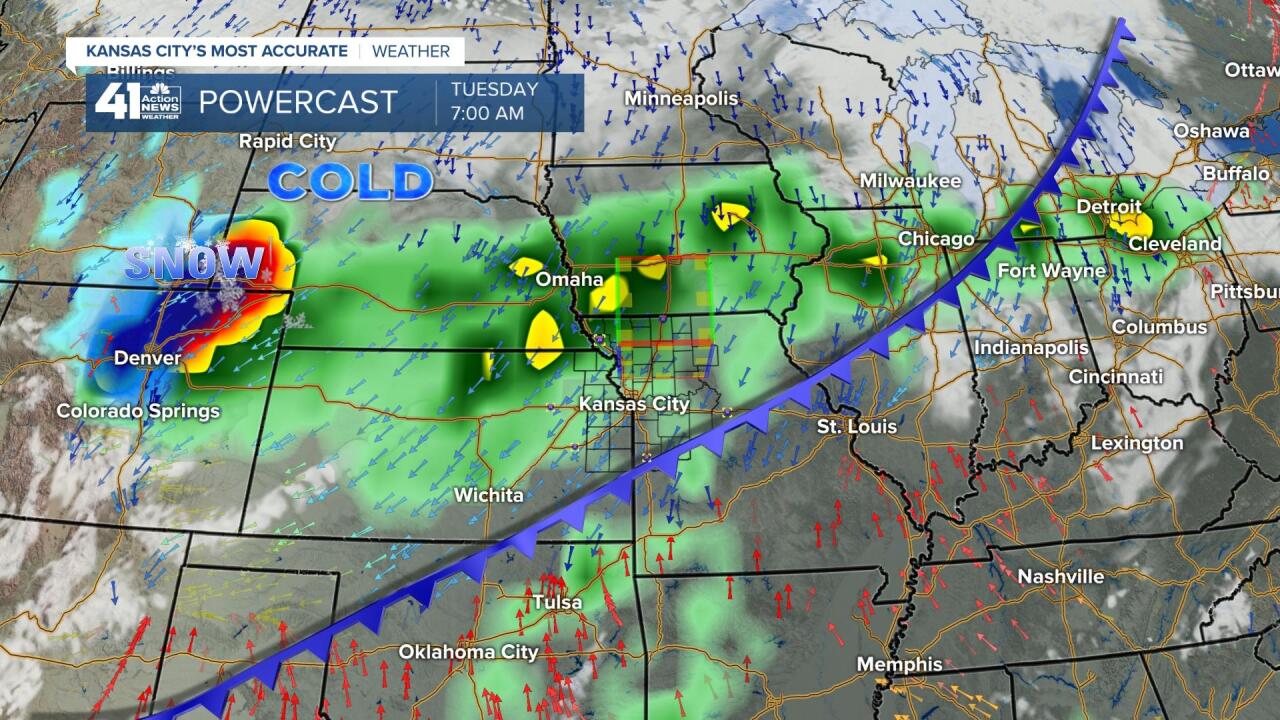 It's Friday! There is a lot to discuss as we begin the Labor Day Weekend. The weather pattern is going through a major change, and it will feel like fall next week, after it feels like summer this holiday weekend. We will have our first fall cold front sometime on Tuesday, and at the same time Denver, Colorado will have a rather extreme change from nearly 100 degrees to snow within two days. Take a look at this forecast for Denver, Colorado:

Wow, just look at that. 98° on Sunday and into the 30s with a chance of snow by Tuesday morning. Here in KC it will not quite be that dramatic, as we will still see to go from the lower 90s to the 50s or 60s later Tuesday afternoon with a good chance of rain.

This forecast map will be adjusted later today on 41 Action News. The storm that is causing this set up is still deeply in question on how it will form. How it forms in the upper levels of the atmosphere is quite important, as this is what influences what happens at the surface. Take a look at the weather pattern:

This map above shows an "anticyclone", or high height area over the southwestern United States. This is a forecast map valid Saturday afternoon. It shows a 600 decameter center. We are looking at the 500 mb level (mb stands for milibar). This 500 mb level is roughly 18,000 feet above us and you can see storm systems and patterns best at this level. The main jet stream is over Canada and the north Pacific, extending east over the northern Atlantic Ocean. As fall approaches, the jet stream gets stronger in response to colder air masses building from the North Pole south into Canada. Temperature contrast is what drives the winds in the jet stream, and as we move through September and October the temperature contrast from Mexico to Canada grows, and the jet stream gets stronger. Look at what happens next:

Just three days later, the jet stream dips into the southern plains and southern Rocky Mountain states, carving out a storm system that is trying to close off into an upper level low. This developing storm has been looking different with each model run that comes out. If it is any stronger and slower, the effects may last into next Thursday night's NFL season opener. I showed last night a high of 68° and dry for the game with temperatures dropping into the 50s by the fourth quarter. Well, if this storm slows down, there may be some rain lingering into Thursday, so we will be paying close attention to these developments.

Rainfall amounts will likely vary from 1/4" just southwest of KC to over 5" in some parts of Illinois. Again, if the storm slows down a bit, our rainfall amounts could go way up. We will know a lot more by the end of the day.

The above map shows the holiday weekend forecast for the Lake of the Ozarks, and this will apply for our entire region. Any chance of rain will likely hold off until Labor Day night.

Thank you for sharing in this weather experience. Have a great holiday weekend, and we will keep you updated as these changes get closer. We will go in-depth on today and tonight's weather forecasts on 41 Action News.