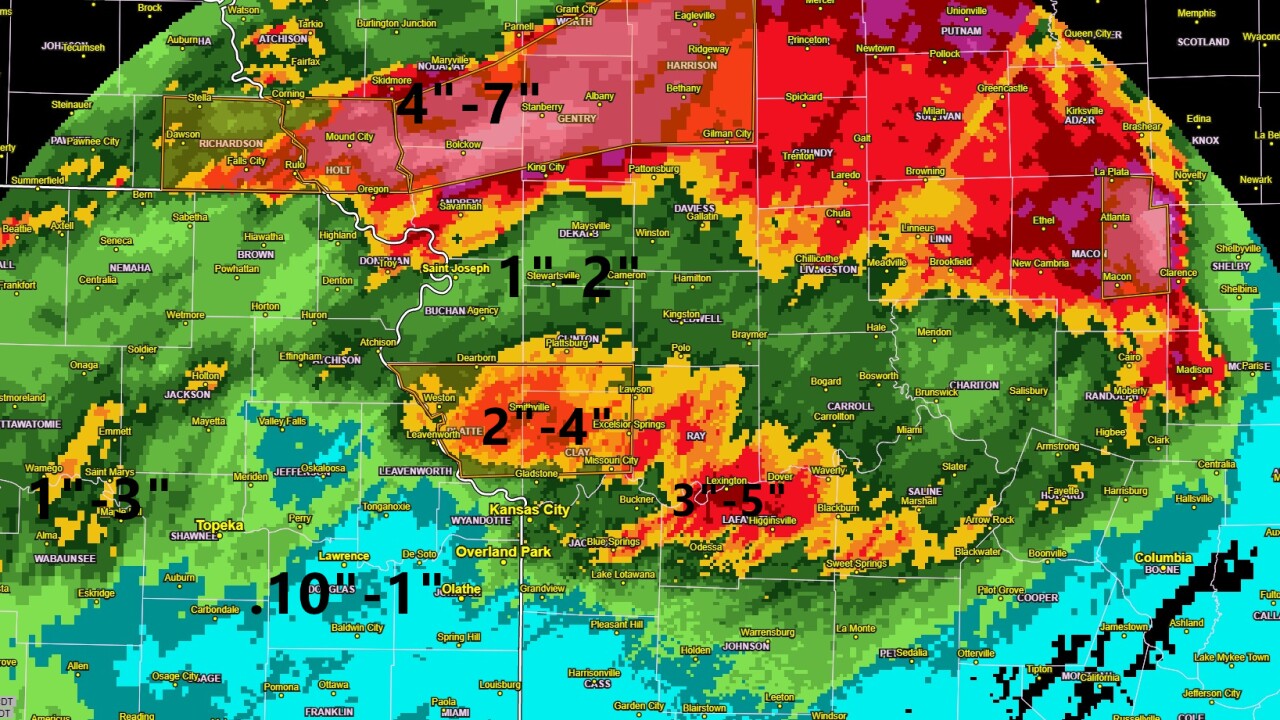 It finally happened where all locations in our viewing area saw at least some rain in one event. The heaviest as expected occurred north of I-70 where many saw 1"-2" of rain with pockets of 2"-7" of rain. Rainfall rates were 2" per hour and north of the river went from, "we really need some rain" to a Flash Flood Warning with amounts of 2"-4". Northern Missouri, as expected, received the most with 4"-7" of rain. This was too much of a good thing. Highway H near Darlington and Highway 48 near Rosendale are closed due to flooding.

South of the river amounts were in the .10"-1" range. This is better than nothing. Also, keep in mind Douglas county and western Johnson county had seen the most rain the last 30 days in the entire area. Inside the 435 loop, south of the river, there were 1"-2" amounts.

Here are some rainfall amounts now that the storm is over:

Here is a radar image from 845 AM this morning. We were the center of attention as a large MCS (Mesoscale Convective Complex, AKA "big area of rain and thunderstorms") was tracking across the heartland of the USA. A cold front came in from the north as a disturbance tracked in from the southern Rockies along the front. The dew point values were also quite high last night at 74-79 (temperatures only had to drop to 74-79 for there to be 100% humidity). So the front, disturbance, and high moisture content of the air finally came together in our viewing area.

What is next? We have been mentioning the chance of a heat wave. There are signs we may fall short. In order to have a heat wave you need to see three straight days with highs of 95 or higher. Let's take a look.

WEDNESDAY 6 PM: The area of thunderstorms will be long gone moving through Illinois. We will see some sun with highs in the 80s along with high humidity. It will be a nice evening as temperatures drop to the 70s. We could see some fog tonight after all the rain and almost no wind with lows dropping to 65-70.

THURSDAY: This will be a nice summer day with highs in the 80s and a light east wind under a partly cloudy sky. So, no start to a heat wave here.

UPPER LEVEL FLOW TODAY AT NOON: The upper level high is over southwest Texas and we are firmly in the flow north of this feature. This is why we just had a large thunderstorm complex. There is a big storm in Canada that sent a cold front south as a decent disturbance tracked out of the southern Rockies around the upper high and along the front.

UPPER LEVEL FLOW FOR SATURDAY: The main center of the upper level high is located over the southwest USA but it extends east to the southeast USA. There are small upper level highs embedded in the long eastward extension. You can also see the northern edge gets to just south of I-80. So, we are inside this thing and this is why we will likely see highs around 95 with high humidity. Saturday would be day 1 with the chance of seeing a high of 95. Friday will be in the low 90s as the heat builds north.

UPPER LEVEL FLOW MONDAY: The center of the upper level high is still over the southwest USA. But look! The eastward extension is gone and we are in a northwest flow along the north edge of the high heat. This would mean by Monday the door is open for a front and chance of thunderstorms which means a high temperature lower than 95.

Saturday and Sunday have a decent chance to see highs around 95. But, that may end on Monday. Our chance of a heat wave is dropping with each new run of data. And, we may just have increasing chances for another widespread rain event in about 5-7 days.