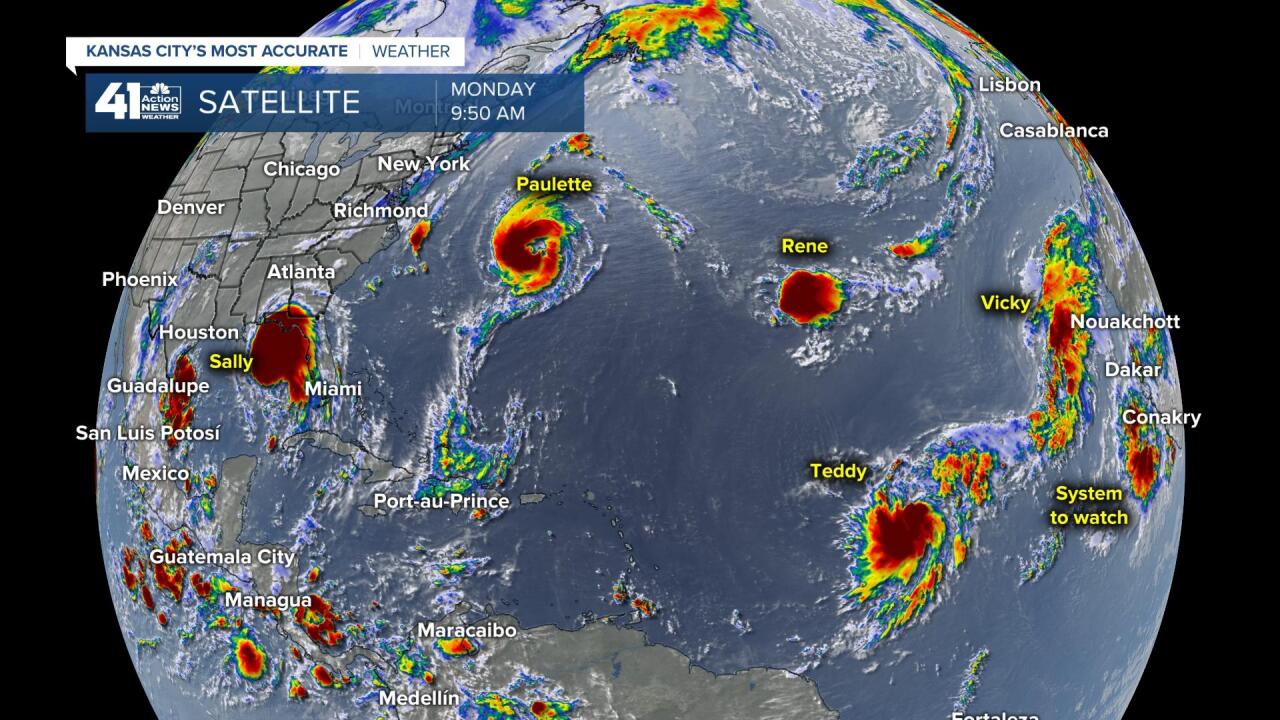 Our weather is calm and collected as fires rage out west and the tropics are active at a record pace. We will see some side effects here in KC from the western fires as smoke returns to our sky. It is likely high up in the atmosphere, so it should not have big health impacts here at the surface.

TROPICAL UPDATE:
The peak of hurricane season is September 10th, so it is not unheard of to have five tropical systems at once in the Atlantic basin this time of year. What is unheard of is the fact that the five tropical systems, here on September 14th, have taken us to the "V" name. We have seen 20 named systems this season so far and average for a whole season is 12. Yes, we are on a record pace.

Vicky just formed west of Africa. Fortunately, three of the five will not have land impacts. Paulette is now affecting Bermuda and Sally will be affecting the northern Gulf coast and southeast USA this week.

Sally is a tropical storm and will make landfall in between New Orleans, LA and Mobile, AL Tuesday. It looks like it will be a category 1, perhaps a low end 2. After Sally makes landfall it will turn to the southeast USA having no impact on our weather.

Rainfall from Sally will be excessive with amounts reaching 10" to 20" where it makes landfall. 5" to 10" will follow its path inland to northern Georgia.

WILDFIRE UPDATE:
The fires continue out of control, burning a record number of acres from California to Washington. The smoke from those fires is heading back to our sky from the north. The storm system last week cleared out the smoke from the Rockies and central/northern Plains. Now the smoke is filtering back in.

There will be some relief for the west coast as a system brings rain to at least the Pacific Northwest the next 5-7 days. Amounts looks to be .05" to .80". The trend is for less rain, but it is better than nothing. Unfortunately, the rain will not extend south to California.

OUR WEATHER:
It is about as calm as it can be as we are looking dry the next 7 days. Highs will be 75-85 with lows 55-65. We are in for some super September weather. If you need to seed and feed your yard, a sprinkler will come in handy.