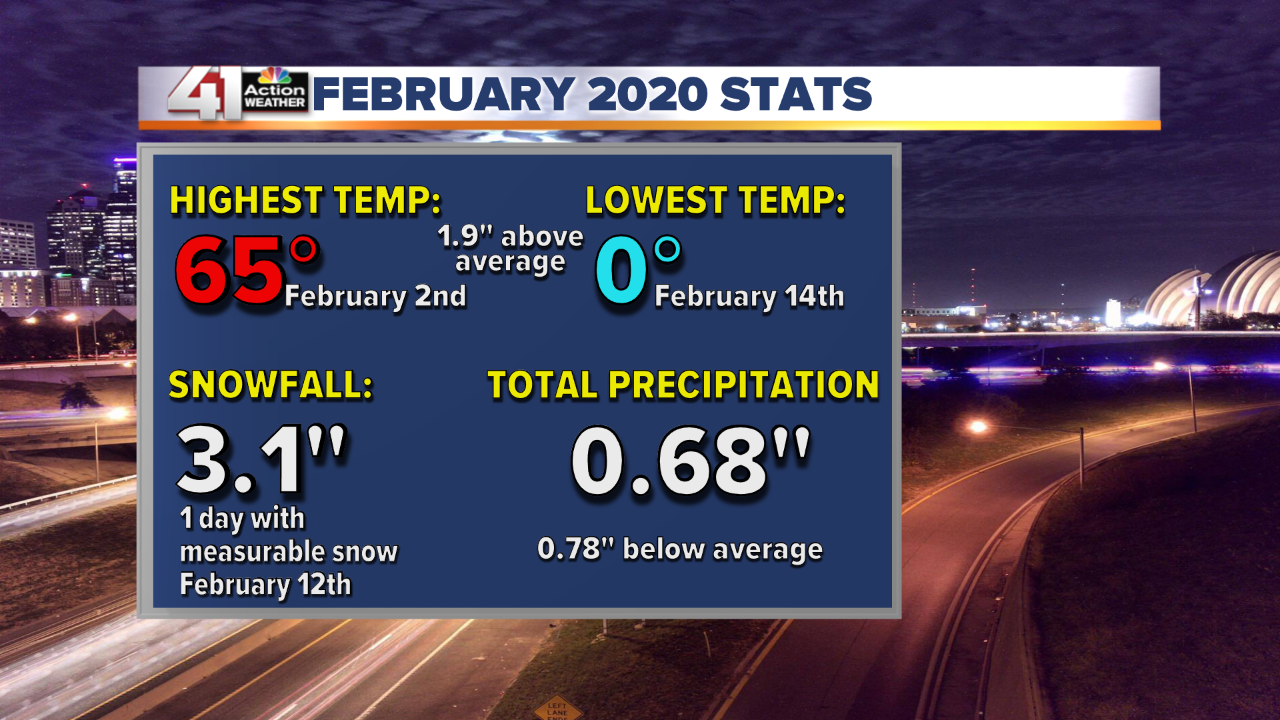 It is not just the first day of March, but it is also "February Statistics Day." The month finished about 2° above average and .78" of rain/melted snow below average. We had just 1 day of measurable snow and 3 days with a trace of snow as we were missed by 2-3 snow systems.

Compare this to January where we had 8.5" of snow and 7 days of measurable snow and 4 days with a trace of snow. The storm systems in January did not miss us as we were 1.73" above average with 2.80" of rain/melted snow.

Now, what does the first week of March look like? Let's go through this.

SUNDAY: We will make a run at 70° again today. Thicker low clouds will be coming north from the Gulf of Mexico. If they get deflected to the east we will be left with high and mid level clouds where the sun can shine through. This will give us a chance to reach 70°. If the thicker low clouds make it in to eastern Kansas, we will stay in the low to mid 60s. Either way it will be a nice day with less wind than Saturday, South 10-20 mph. A cold front will be approaching from the west.

SUNDAY NIGHT: The cold front will move through and there will be scattered showers and thunderstorms across the southeast 1/2 of Missouri. It is a sign of the changing seasons. There will be a few hours of gusty, window rattling, north winds after the front. It is also Severe Weather Awareness week, another sign of the next season to come. On Tuesday at 10 AM, the sirens will be tested.

MONDAY: It will be partly to mostly cloudy with a decreasing wind and colder. It will be a cold start to the day with wind chill values in the teens and 20. The afternoon will see a light wind with average temperatures for March 2nd. This means highs 45°-50°. There is a slight chance for a sprinkle or rain shower. If it comes in early enough it could be a flurry or snow shower. The chance of any precipitation is less than 20%.

TUESDAY: It will be a nice day with highs around 60°. The wind will be 5-15 mph from the west and southwest. Clouds will be to the south as a large and wet storm system tracks across the southern USA.

WEDNESDAY: We will continue to have nice weather with highs around 60° and a light wind. Heavy rain will be occurring from Texas to the Carolinas.

THURSDAY: It will be another nice day with highs in the low to mid 60s as the southern storm exits the USA. A weak cold front will arrive Thursday night, making Friday cooler with highs in the 50s, but still quite nice.

RAINFALL/MELTED SNOW FORECAST THE NEXT 7 DAYS: 4"-6" of rain is likely from Mississippi to South Carolina. This is farther south than it looked yesterday. 2"-4" of rain will be likely from southeast New Mexico to Alabama. Flooding is going to be a concern down there. The heaviest rain could still shift south or north by 100 miles. We will be mostly dry the next 7 days. The .01" hinges on what occurs Monday. The weather pattern will become more active during the 2nd and 3rd weeks of March. There will be 1-2 more chances of snow.

Have a great first week of March.