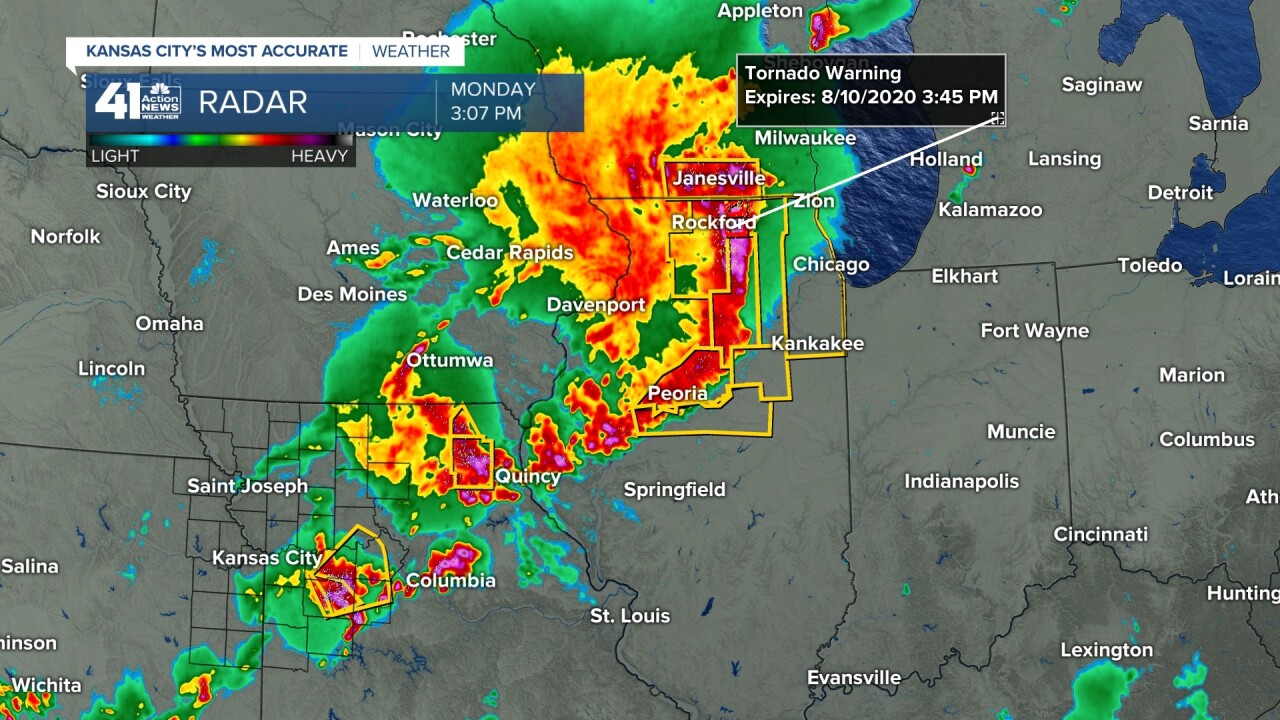 Today was already a fascinating day. I drove to the south side of the city, in south Overland Park, and worked out this morning. While I was working out a thunderstorm formed right over 119th and Metcalf and then tracked southeast. A few spots had a downpour,, some lightning and thunder, and then it ended 15 minutes later. The chance of any other thunderstorm development is very low today into Thursday. This weather pattern continues to cycle according to the LRC. We have had around a two month cycle this year, and we will look at one incredible example in this blog entry.

Today's thunderstorms were isolated compared to what we experienced yesterday across the United States. Thunderstorms developed early Monday morning over South Dakota and then tracked southeast and east into Chicago, IL. What is called a Derecho developed. A Derecho is a large scale bow echo where the line of thunderstorms bows out in repsonse to strong and damaging winds a the surface. This echo formation will last a long time, and this one lasted for around 12 hours. There was wide spread wind damage along it's path.

This thunderstorm complex got so huge that it had impacts on our thunderstorms in KC. An outflow of cooler air spread across Missouri yesterday and it actually ended our chance of rain. So, the influence on our area was for less rain than we were anticipating and forecasting. Now, we may wait a while for our next thunderstorms. This radar image from yesterday afternoon shows the Derecho approaching Chicago. It blasted in and produce this:

This picture is courtesy of Mauricio Peña, Block Club Chicago. That tree fell into that Toyata, and there were many other trees knocked over, and even one tornado confirmed on the north side of Chicago. This line then continued east. This next map shows all of the dots, with each dot being a wind damage report:

Now, here is where the LRC comes in. If you are new to the LRC, it is a description of the cycling weather pattern. According to the LRC, the weather pattern sets up in October and a cycle length becomes established. This year's cycle is close to 60 days. After the pattern sets up, it continues to cycle and Weather2020, LLC (Go to https://www.weather2020.com ) makes predictions weeks to months in advance. This Derecho with all of those severe weather reports was predicted to happen around August 10th months ago, and it happened. Look at what happend two months earlier in June:

And, look at the biggest outbreak of this year two months earlier on Easter Sunday:

And, let's go all the way back to the beginning of this years pattern in October. On October 20th, or 295 days before August 10th, fitting perfectly within the LRC was another severe weather outbreak. This night, there was a NFL football game in Dallas, TX where the Cowboys hosted the Philadelphia Eagles. A lot has happened in this world since then, right? That evening there were tornado warnings during the game. Here are the reports from that day:

So, we had significant severe weather on October 20, December 16, February 12, April 12, June 10, and August 10. This is just another incredible example and exhibit of the LRC. The weather pattern is cycling and we have figured out the order to what my peers think is just chaos.

So, we can predict major severe weather outbreaks months in advance, but can we predict this mornings thunderstorm in Overland Park. That is actually more difficult, believe it or not. I think the chance of any additional thunderstorm development the next two days is rather low. We will discuss this and more as we bring you the most accurate forecast in KC on 41 Action News tonight!

Thank you for spending a few minutes of your day reading the Action Weather Blog. Have a terrific Tuesday!