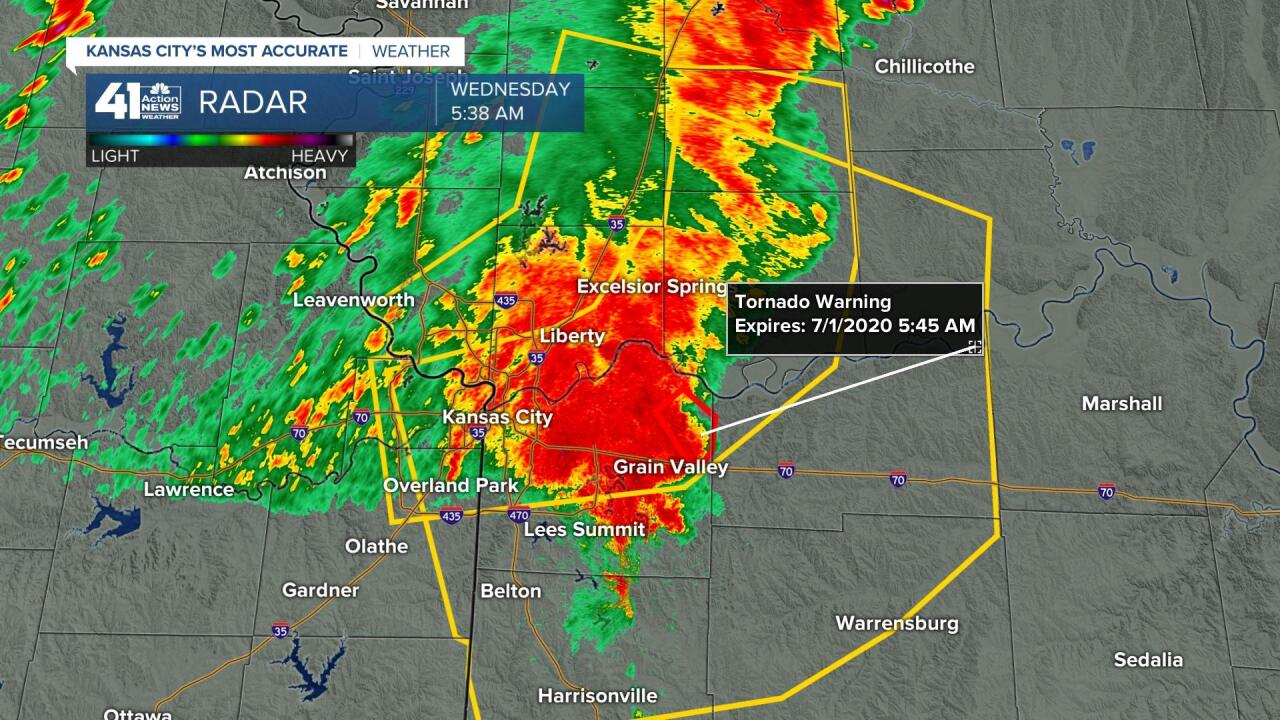 After getting missed by most of the thunderstorm events in June, we start July, 1 for 1. We will look at what occurred last night and it is also June statistics day. Then, we will finish by looking at the weather through the 4th of July weekend.

Tuesday night we were tracking an area of thunderstorms in eastern Nebraska. We knew this was going to turn south, but we were not sure how far east it would track before it made the south turn. Gary was on last night at 10 PM and went for the the complex to turn south and impact Kansas City.

This is a satellite image from 740 AM Wednesday. We had a classic MCS (Mesoscale Convective System).

This is an image of the storm total rainfall with the severe weather reports. We will look at the rainfall below. There was some minor wind damage southwest of Liberty where there were some tree limbs down.

There was a small cluster of tree limbs down in northeast Clay county and one hail report northwest of Blue Springs.

A Tornado Warning was issued around 530 AM for eastern Jackson county. There was some rotation, but fortunately no tornado or damage. There were about 10000 people who lost power in total. This is a relatively low number given the population of our metropolitan area.

So, there are still many that need rain as last night did not bring meaningful rain to all locations. The weather pattern the next 5-7 days will feature one in which rain making disturbances will be wandering through the Plains and Midwest inside a large upper level ridge. This means the rainfall patterns each day will be lower coverage and in mostly different, random locations. The location of the rain areas will depend on where the disturbances are tracking. We will have to take each rain chance one day at a time.

Here is the set up for today. The thunderstorms from last night were still raging from northern Arkansas to central Illinois Wednesday afternoon. This has created a cold front as a large area of rain cooled air surges south. This is also a leftover of the cold front from yesterday in Nebraska that spawned the thunderstorms. The front stalls into southern Kansas. So, the best chance of new thunderstorms tonight will be across southern Kansas, southward, as any thunderstorms that form will track south tonight.

This is the rainfall forecast for the next 5 days. There are three things to take away from this map.

1. This is just one model and not only does this one change from run to run, but so do the others.
2. Remember what we said above. We will have to take each rain chance one day at a time as we are tracking wandering disturbances.
3. Regardless of the location, this does show the type of rainfall pattern that we are dealing with. There will be zones of .25"-1", 1"-3" of rain and zones where a few drops occur.

So, the forecast Thursday-Sunday is this:

Partly cloudy with highs around 90 and lows around 70. The wind will be 5-15 mph from varying directions. There is a 10-20% chance of thunderstorms each day. Friday may see a higher chance. If you are out and about, keep an eye to the sky and stay weather aware. Thunderstorms can come up fast.