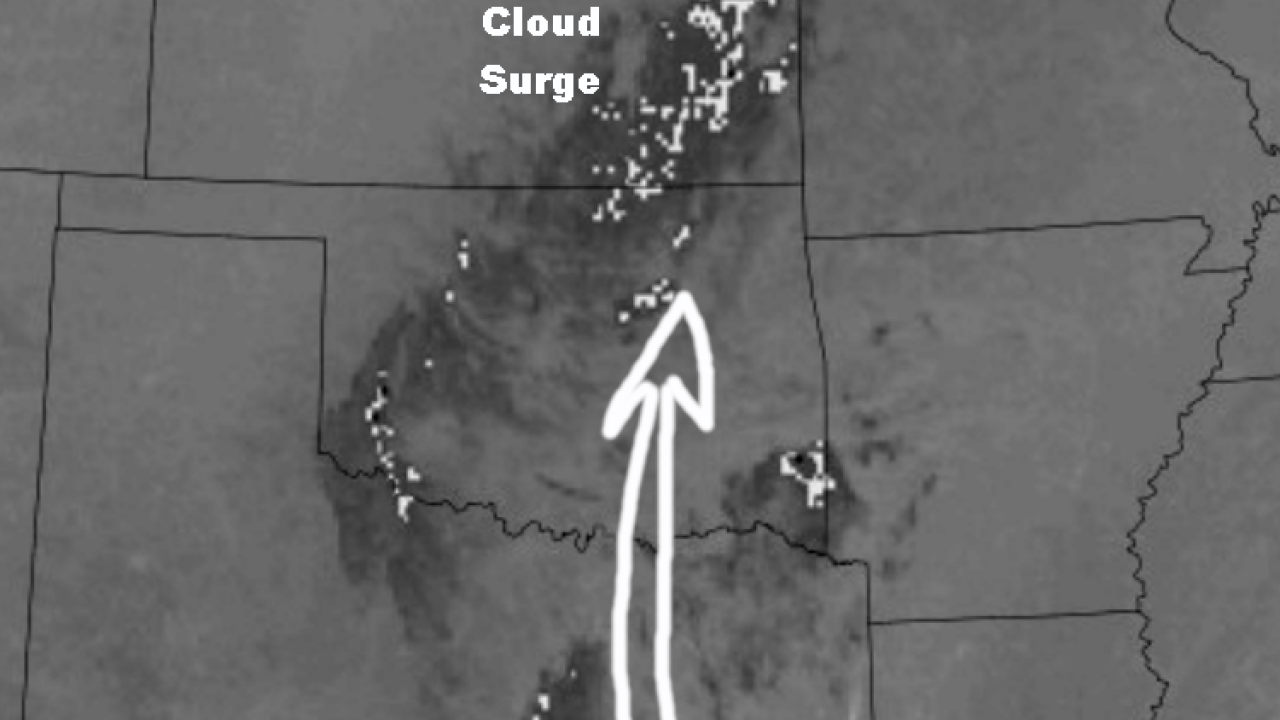 It's Friday! The weather pattern is beginning to shift just a bit, and the first evidence of this changing pattern is a low cloud surge. All you have to do is look outside and the clouds are thick to start the day. These low clouds surged in right around 6:30 AM. Where did they come from? Take a look:

This is an interesting satellite sector that picks up the low clouds at night. The dark color shows the lowest cloud cover and they extended from downtown Kansas City into Oklahoma and Texas. These will be thick and last a while. The sun should make its way through the clouds later today, but these clouds are a factor and may keep us in the 60s today. 60s in November are not bad, and it will warm back into the 70s on Saturday.

The chance of rain early next week:

A storm will develop and track across the Kansas City area Monday and Tuesday. By Tuesday morning, this storm will bring rain. We went with 100% chance of rain, so quite obviously I am highly confident it will rain. But, how much? The amounts will vary from 0.01" to possibly up to 1.50". A 1.50" soaking would be nice as it has been so dry. The fact it has been so dry makes me lean towards lower totals, but we have a few days to analyze this potential rainfall and we will update the totals as it gets closer. Tropical Storm Eta is also visible on this map, and we will discuss Eta in just a minute. Let's zoom into this map first.

This map, above, shows a low pressure area zipping by on Tuesday morning. This is when the chance of rain will reach 100%. This system will quickly move by and the heavier rainfall amounts may materialize east of KC.

Hurricane Eta is currently a tropical depression over the western Caribbean Sea after becoming the second strongest November hurricane on record. The record-tying twenty-eighth named storm, twelfth hurricane, fifth major hurricane, and most powerful tropical cyclone of the extremely active 2020 Atlantic hurricane season, Eta originated from a vigorous tropical wave in the eastern Caribbean Sea that developed into a tropical depression late on October 31. Eta is now likely going to strengthen back into a Tropical Storm today and track across Cuba early next week before turning into the Gulf of Mexico by Tuesday. If there is another named storm, it will be named Theta, but this one is called Eta, as we go through the Greek alphabet. I think there may very well be one more named storm before this record breaking hurricane season finally ends. This is a concern for Florida for next year. We are now in the new LRC for 2020-2021, so this tropical storm is actually an indicator for next hurricane season. This year, Weather2020, LLC accurately predicted that Florida would be the least likely region to have a named storm, and as active as this season has been, did you know that there has not been one landfall in Florida. Until possibly now, but this is the new LRC, so next year Florida may be more of a target. We will discuss this in a few months. The water is likely too cool for it to regenerate into a hurricane, but let's monitor it closely.

Thank you for spending a few minutes of your day reading the Action Weather Blog featuring the LRC! Have a great weekend & watch 41 Action News, and we will keep you advised.