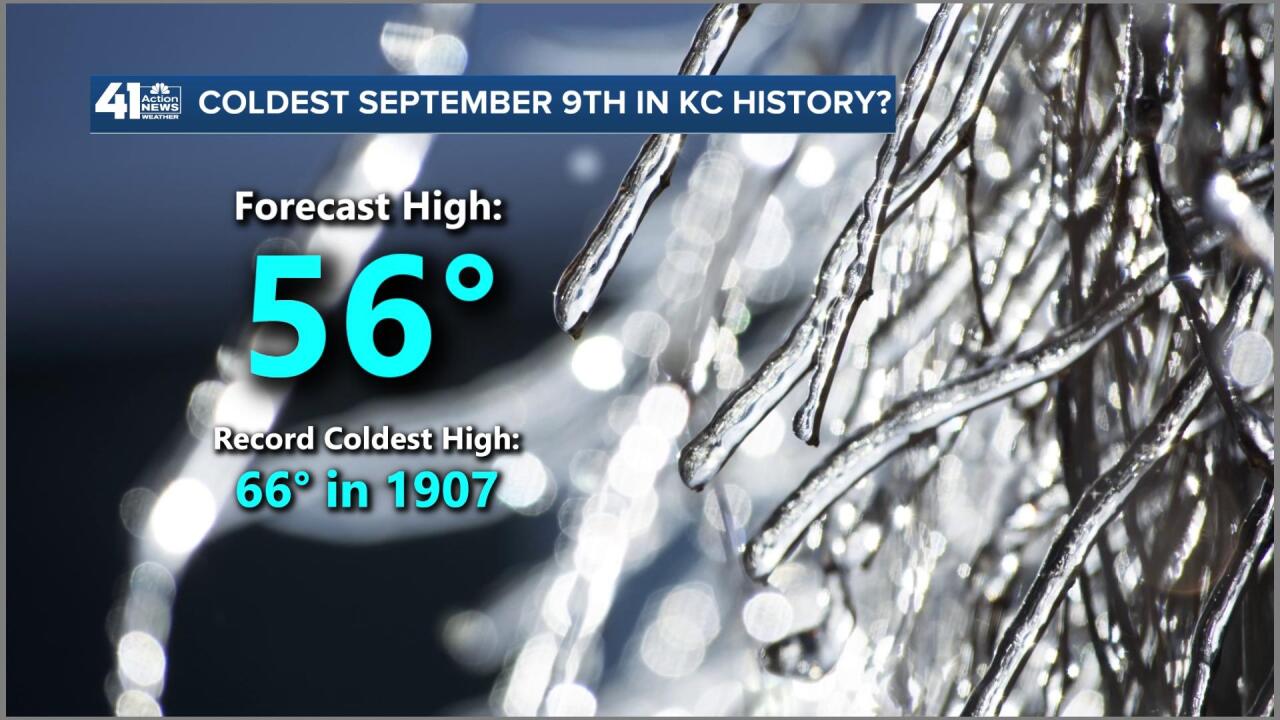 The weather this week has been odd to say the least. We came 3 degrees from a record low this morning as we dropped to 49. The record coldest high for today is 66 set back in 1907. We should crush that record by around 10 degrees as we struggle to reach the mid to upper 50s for highs. The record coldest high for Thursday is 60 set back in 1898! We may break that as well.

2"-4" of snow fell in eastern Colorado after being 90-100 degrees 2 days ago. Some locations received 5"-10" of snow west of Colorado Springs and Pueblo! The northwest corner of Kansas received a dusting to 1" of snow. There was sleet as well. The earliest recorded snowfalls in most locations of western Kansas are during the 3rd and 4th weeks of September.

We have been talking about a good chance of widespread rain, but so far the activity has been spotty. It has been all around us.

That may be about to change as we are tracking two main rain chances. Our first main rain chance is now located over Texas. This area will track up I-35 and arrive later tonight. The cold air is not making it to St. Louis while snow and sleet fall across Colorado and extreme western Kansas.

This is all being caused by a strong storm system that has dropped into the southwest USA at the same time an unseasonably cold air mass surged south into the Plains.

The storm that dropped into the Rockies that has created the odd weather week also did something else.
Take a look at the smoke on the west coast. The wind blowing offshore, due to the storm system, is pushing the smoke out to the Pacific Ocean. It has cleared out the smoke from most of the western USA. Some smoke has been pushed east across the Midwest, but has been mixing out due to the clouds and rain. Unfortunately, the offshore wind has been strong and caused more fires. Especially in Oregon.

As it stands now it looks like the best chances of widespread rain and some thunderstorms will be 2 AM to noon Thursday and around 8 AM to 5 PM Friday. Yes, this is good news for the Chiefs game. But, the timing could still change and also there could still be a few showers and drizzle even if the main rain has ended.

The next video has more details on the forecast for the rest of the week, including our latest rainfall forecast. Keep in mind, the locations of the heaviest totals are subject to shift around a bit due to predicting the exact placement of future heavier thunderstorms is a challenge. The video has no audio and lasts about 1 minute.