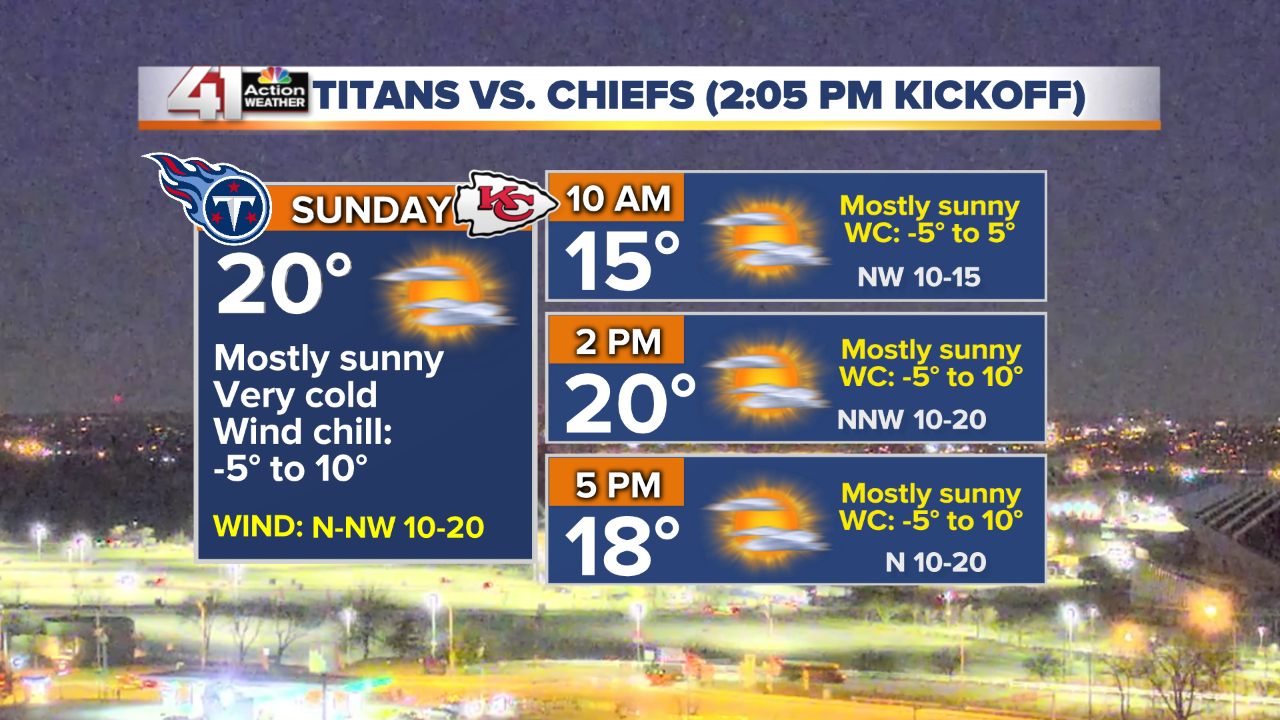 How long has it been since the Chiefs were in the Superbowl? Four months after they won Superbowl IV, I was born. This is Jeff doing the blog by the way! There is no football or weather reason the Chiefs lose this game. They have won in all kinds of weather this season. Now, to the weather. We are now in the cold air and we are tracking a small system and possibly a bigger storm.

CHIEFS SUNDAY: It will be mostly sunny and cold with temperatures 15° to 20° at kickoff. So, this will be in the 5th to 7th coldest kickoff for a home Chiefs game. The coldest was a forgettable game against the Titans in 2016.

MLK JR. DAY: We will be tracking a small, fast-moving system moving south along I-29. It will have a small area of snow associated with it. This data has it coming right into KC between 10 AM and 2 PM. It is a "needle in a haystack", so a shift west or east by 50-100 miles could take KC out of the snow. Temperatures will be in the single digits, so if you get into the snow, surfaces will get covered instantly making them slick. This system has a dusting to 1" potential. The 1" amounts will be found in a narrow band right in the middle of the snow area track. Highs tomorrow will be 10° to 15°.

WEDNESDAY: It looks like we will see a cold rain, but the precipitation may start as a mix of snow, sleet and freezing rain. Temperatures will be at or above freezing, so roads will be wet. They could briefly be slick if the precipitation arrives before sunrise and it could. This is part one of the storm. Also, some data suggests this may be all wet snow. If temperatures are 32-34 instead of 34-36, it will be snow instead of rain.

FRIDAY: On this data the storm is tracking across southwest Missouri. This puts our region in the "comma head" of the storm where accumulating snow is found. So, for the third straight week we are facing a tough and complex forecast.

GO CHIEFS! And have a great week. It will be much greater with a win!