Weather Blog: Snow on the Parade 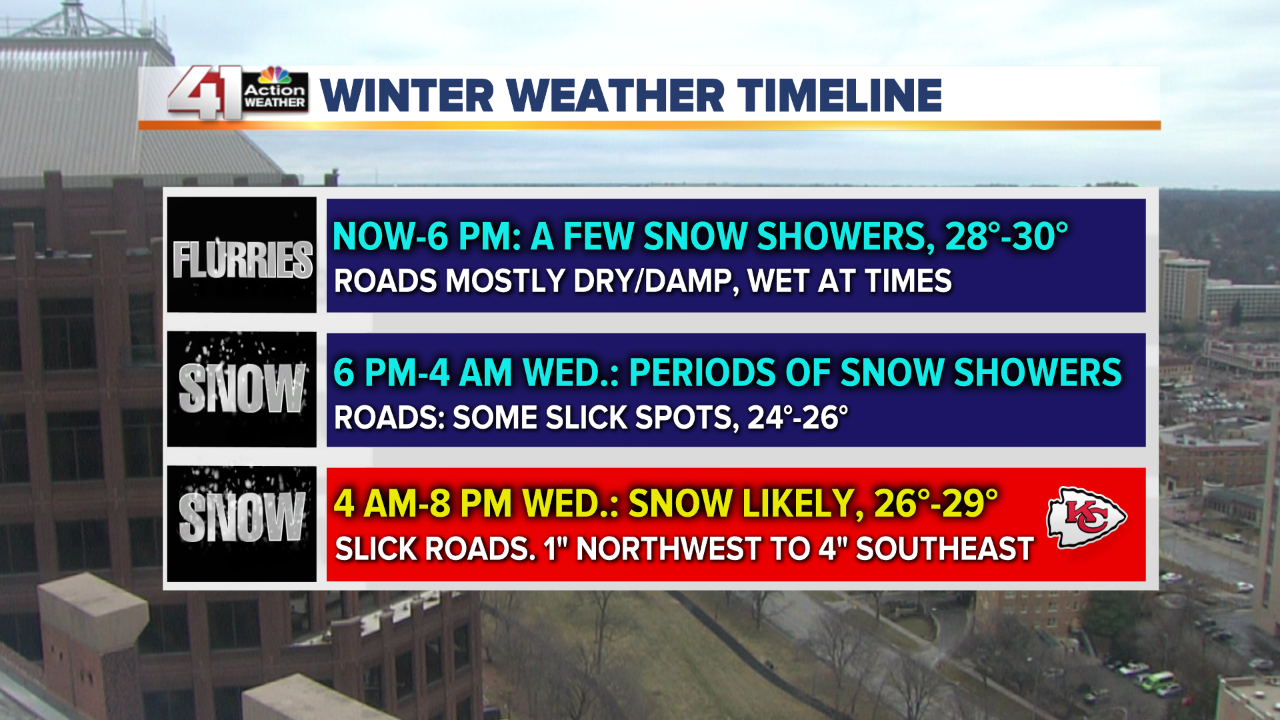 We had a small disturbance that brought an hour of heavy snow to locations mostly south and east of I-35 this morning. The main storm arrives later tonight and exits Wednesday. The forecast is still tricky as we are on the northwest edge. It will have an impact on the parade which you can watch on 41 Action News.

Let's go through the forecast.

TODAY-TONIGHT: We are not expecting much snow as the main storm organizes in the southwest Plains. There will be small areas of snow that track across the region ahead of the main storm. So, we will see periods of snow, mostly light. We are not expecting any big road issues through 5-6 PM. After 6 PM slick spots are possible. There could be temporary slick spots before 6 PM if the snow comes down hard enough to overcome the warm pavement temperatures that are now 35-40.

SUPER BOWL CHAMPIONSHIP PARADE WEDNESDAY: The main snow will arrive 4-7 AM with temperatures in the 20s, so roads will get slick.

It looks like most locations will see light to moderate snow as the parade begins.

The snow will exit to the east Wednesday evening. Notice, the western edge all day. It runs basically from St. Joseph to Topeka. So, you can see if this storm shifts east by 30 miles we will not see much snow during the parade. If the storm shifts west by 30 miles we could see heavier snow.

SNOWFALL FORECAST: Right now we are going with less than 1" in far northwest Missouri and northeast Kansas. We are going with around 1" northwest of KC to 4" southeast of KC. Kansas City is in the 1"-2" range. 4"-6" of snow is likely from Clinton to Marshall and east. Again, a shift 30 miles east or west will change this snowfall forecast, plus or minus, by 1"-2".

This storm will bring heavy snow in a band from west Texas to southern Missouri. 3"-4" of snow is possible where Patrick Mahomes played college football, Lubbock, TX.

Thursday through Sunday will be mostly dry with a warming trend to highs in the 40s this weekend.

Have a great night and stay safe.