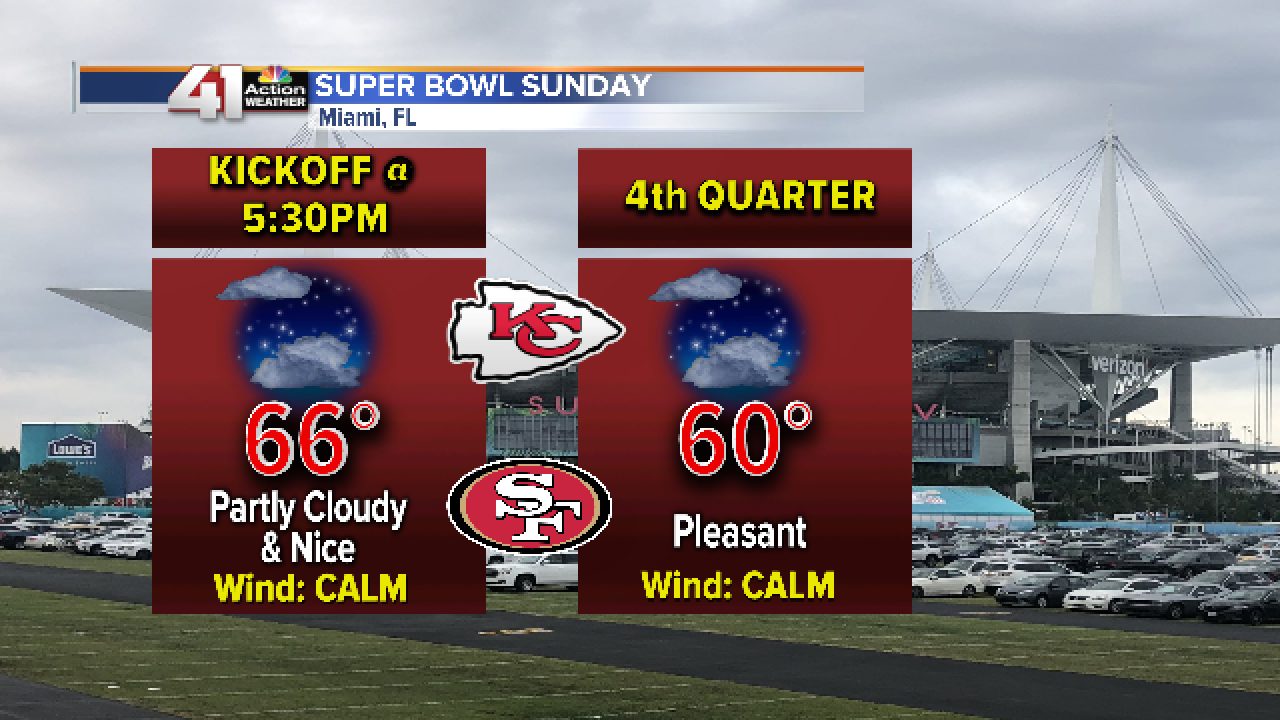 The high temperature on Sunday in Kansas City may be very close to the kickoff temperature in Miami for the Super Bowl. The San Francisco 49ers will be facing the Kansas City Chiefs in Super Bowl LIV (Super Bowl 54). By Sunday night the Chiefs Kingdom will be celebrating when Patrick Mahomes and the Chiefs pull off the big victory. It has been 50 years for the Kansas City Chiefs since they were in the Super Bowl. They were actually in two Super Bowls. The Chiefs lost to the Green Bay Packers in the first Super Bowl in 1967, and then beat the Minnesota Vikings in 1970, or 50 years ago. The Chiefs have the best player, and the 49ers have a solid defensive. The things that are being underestimated are the 49ers offense, and the Chiefs defense! If the 49ers are able to create havoc, and stop Patrick Mahomes, then they will win. The problem is, not one team in two years has stopped Patrick Mahomes for more than one half. And, in one quarter, the Chiefs are able to score 21 points or more. So, San Francisco will likely have to score 30 points to win, and the Chiefs defense has been strong enough to prevent that from happening. So, I predict a 33-24 Chiefs victory!

On Sunday, a storm system will be tracking north of the USA/Canada border, and this will provide the conditions for a big warm up, and dry weather for most of the United States on Super Bowl Sunday as you can see below:

A huge warming trend begins slowly, as these clouds just are going to be slow to clear out. By Saturday afternoon, the sun will finally break out and temperatures will respond with a warm up into the 50s. Then, next week we have a chance of more snow. When the Chiefs do beat the 49ers on Sunday, we then will have some weather challenges for mid-next week. Most of the models have some accumulation of snow on Tuesday or Tuesday night. Confidence is low at the moment.

Kansas City had 0.3" of snow yesterday, and this places us up to over 14 inches of snow for the season thus far. February is looking like it will be even wilder than we just had in February. We will discuss this in tomorrow's blog.

Expect a another cloudy day. It will likely be cloudy through Friday, and the that sun will come out as we prepare for Super Bowl Sunday. Saturday and Sunday will feature a big warming trend with highs in the 60s likely Sunday afternoon. Go Chiefs!

Thank you for spending a few minutes of your day reading the weather blog!