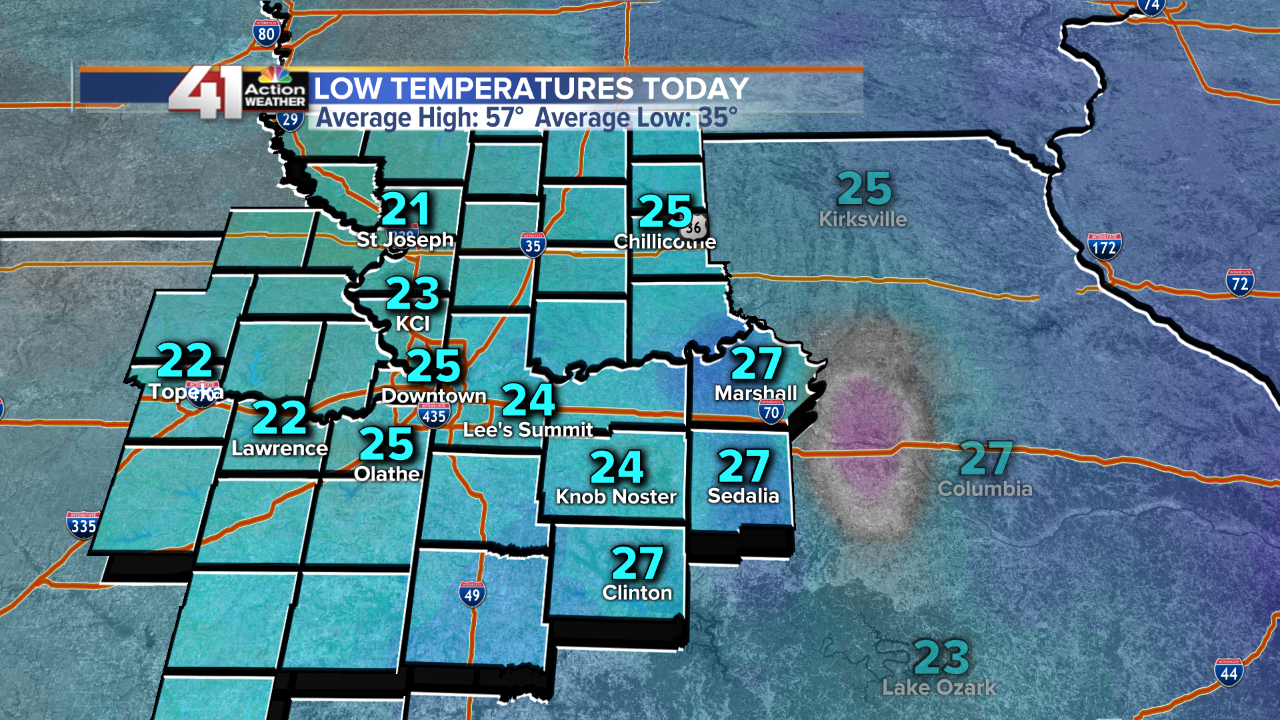 I hope you are all staying healthy. The hard freeze we have been forecasting has come true as lows have dropped to the low and mid 20s. The low at KCI was 23° which is 10 degrees above the record set in 1913. Now we turn our attention to two storm systems. Let's go through this forecast day by day.

The first storm system is moving through southern California and the second system is off the California coast as of early Saturday morning.

SATURDAY: It will be a nice afternoon for a walk with a partly cloudy sky, light wind and highs in the 40s.

SATURDAY NIGHT-SUNDAY MORNING: A cold rain arrives after midnight and it may change to snow across northern Missouri. There may be some minor accumulation on grassy surfaces. Temperatures will be 35-40. A few degrees colder and we would be seeing all snow, but that will likely not happen.

SUNDAY AFTERNOON AND NIGHT: The rain will taper to drizzle as the main storm tracks to Chicago and becomes all snow. We will see highs and lows around 40 Sunday afternoon and night. Fog is possible by Monday morning.

MONDAY-MONDAY NIGHT: It will be a mostly cloudy day with highs in the 50s. Rain and a few thunderstorms will arrive Monday night as the second storm system arrives with lows dropping to the 40s.

TUESDAY: Rain and thunderstorms will be likely during the morning, ending during the afternoon. Lows will be 45-50 with highs around 60. We may see some sunshine Tuesday before it sets.

RAINFALL FORECAST THE NEXT 5 DAYS: When you add up storm system #1 and storm system #2 the total rainfall potential is a widespread 1" to 2". There is some flooding on the Missouri river. Now, the snow pack upstream across the Missouri river basin is not nearly as extensive as it was last year. So, this would mean less chance for major river flooding. However, many levees are still not fixed, so it won't take much to cause flooding along the river. We will be watching this closely the next several weeks.

Wednesday will be a nice day with highs around 70. Thursday and Friday will be colder with highs 45-55 and lows in the 30s. There is a slight chance for some rain.