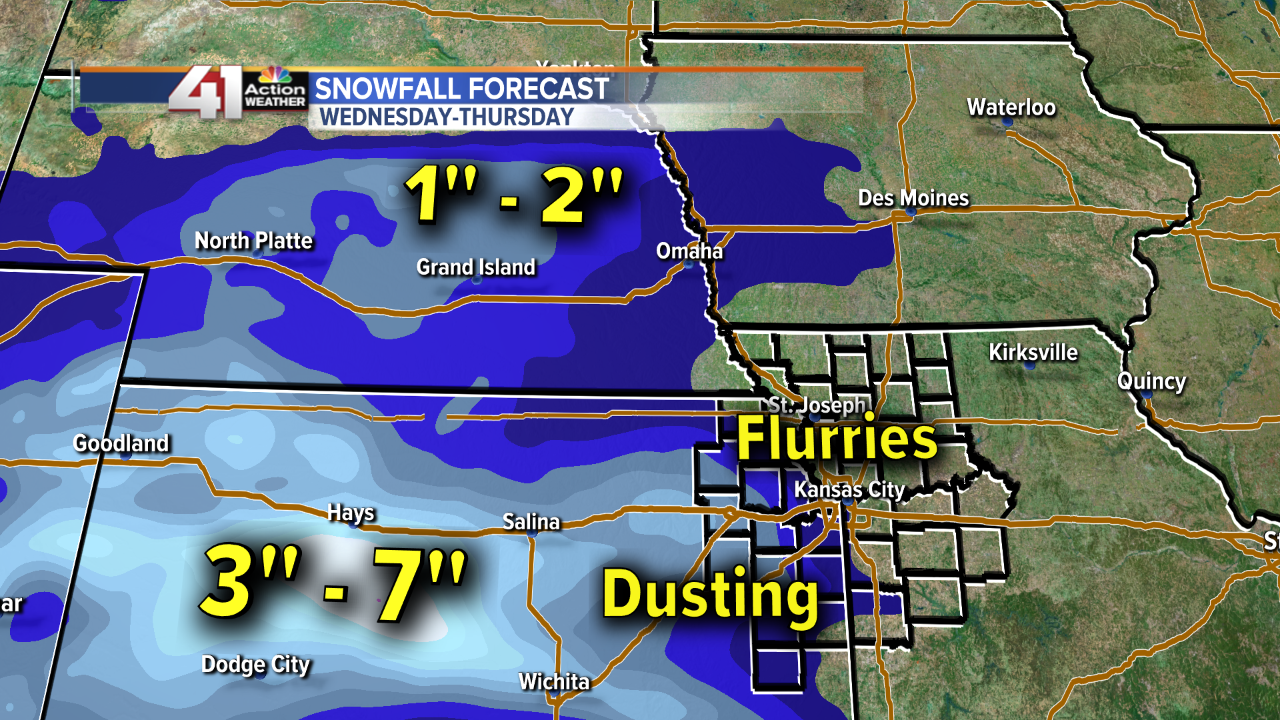 We are tracking two storm systems. The first one is for tonight and the second one will affect the second half of the weekend. Let's go through this.

As of noon Wednesday there was a strong cold front drifting south into northwest Missouri and northern Kansas. Temperatures are around 40 ahead of it and teens/20s behind it. This cold front will move through tonight, but what about snow? You can see areas of snow developing in the western Plains and along I-80. These areas of snow will be moving east while the whole set up sags south. Each one of these areas of snow is associated with small disturbances that fall apart as they move east.

WEDNESDAY NIGHT: Tonight as the front is crossing I-70 one of these disturbances will be moving along the front. An area of snow will be moving east as it weakens then falls apart. And we are in the area where it falls apart. So, if it holds together a little longer we could see 1/2" of snow that coats the ground. If it falls apart faster, then we will see nothing, flurries or a bit of snow blowing around in the road that is a non-factor. If we see 1/4"-1/2" of snow, that will be enough to cause slick spots as temperatures will be dropping to the teens. We will have to watch this closely and do a Nowcast as the models range from zero to 1" of snow. This is like trying to figure out if we will see a few drops of rain or as much as .05". When it is rain, a trace to .05" does not make nearly as much of a difference as when it is snow.

THURSDAY MORNING: Regardless of whether we see snow, it will be cold with lows around 15 and wind chills 0 to 10. The wind tonight and early Thursday will be NE at 15-25 mph.

THURSDAY AFTERNOON: The sky will clear early Thursday leading to a sunny and cold day with highs 30-35. The wind will decrease to NE 10-15 mph.

FRIDAY: The surface high pressure bringing down the cold air will be moving into Tennessee. Since winds blow clockwise around high pressure, we will see south winds. This will warm us to the 40s after lows in the teens. There will be abundant sunshine.

SATURDAY: This will be a nice day with highs in the 50s. It will be a bit breezy from the south.

SUNDAY: This is the second storm we are tracking. Right now it looks like a decent amount of rain with temperatures in the 40s. There is a slight chance it could end as wet snow Sunday night. We could see .25" to 1" of rain which would be plenty to wash off all the salt out there.

RAINFALL FORECAST NEXT 7 DAYS: This data has around 1" for our region. 1"-3" of rain is likely across the southeast USA which is already having flood issues.

Have great rest of your week.