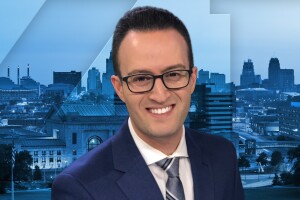 He stays in the NBC family after more than six years at WREX-TV in Rockford, Illinois. He contributed to award-winning coverage in the news, weather, and sports departments, specializing in major events. He brought viewers to multiple election nights, tornado outbreaks, the World Series and Stanley Cup Final.

Dan is originally from New Jersey, and graduated from Syracuse University with degrees in Broadcast Journalism and Sport Management. Having spent time in Upstate New York and the Midwest, he's no stranger to every season of wild weather!

He is a voracious consumer of just about every genre of film and television, but staunchly defends his fandom of "The Wire," "The West Wing," and the Martin Scorsese catalogue. When he's not in front of a screen, Dan stays active and continues to look for a consistent golf swing.

As a new resident in Kansas City, he is excited to experience everything the metro has to offer - the great food, the rich history, and a passionate sports town that loves its Chiefs, Royals, and Sporting KC!