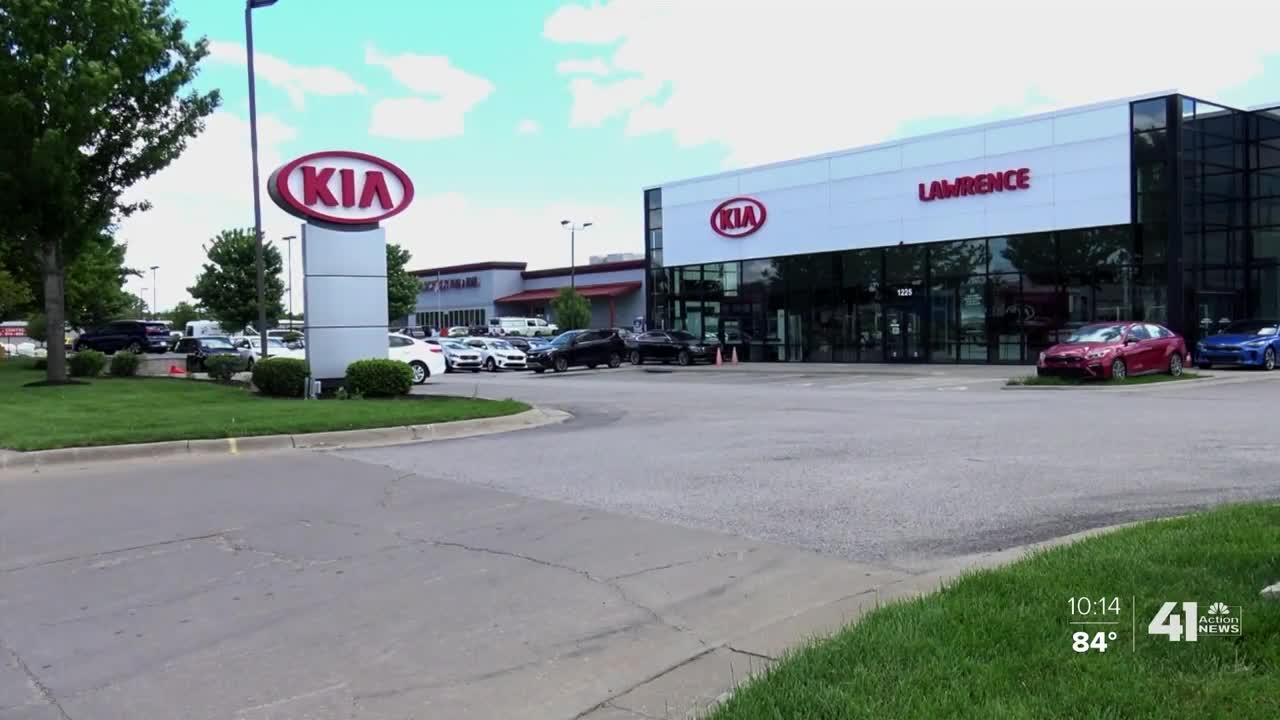 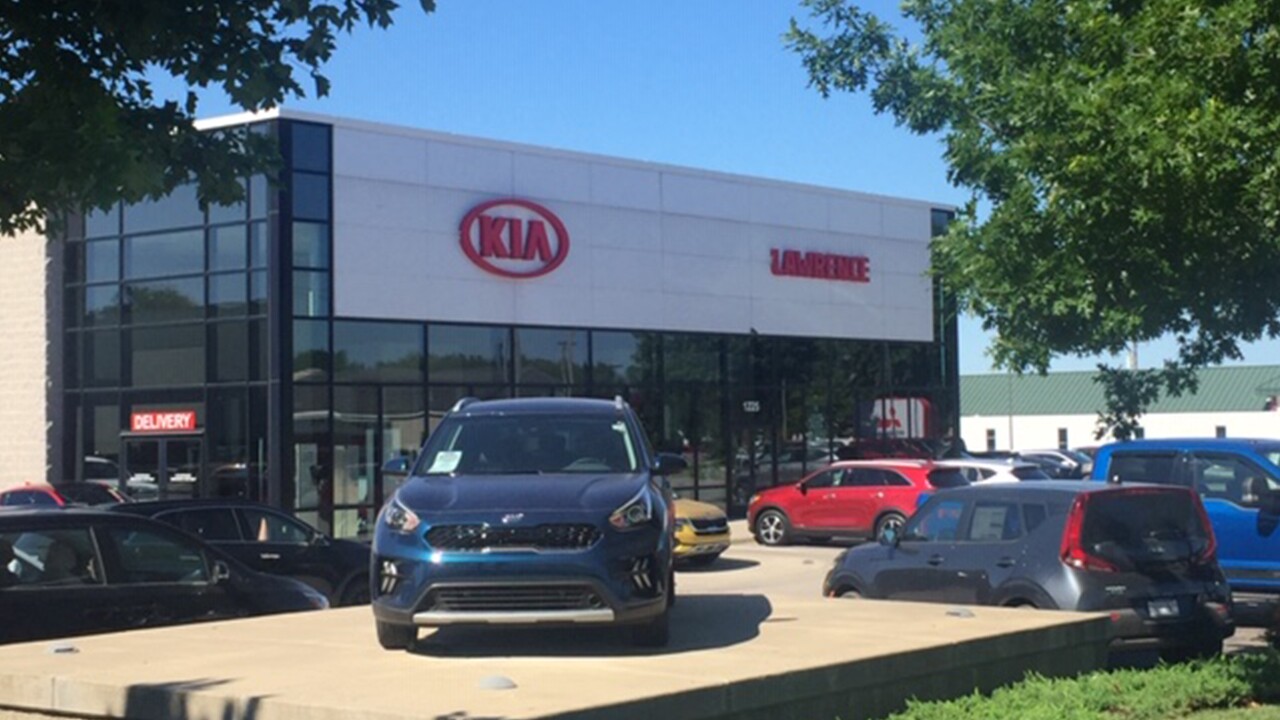 LAWRENCE, Kan. — They filled out applications to buy cars. But several customers of Lawrence Kia claim the dealership greatly inflated their monthly incomes in order to seal the deals.

Lawrence Kia customer Herb Vance looked online at what the dealership had available and thought he found what he was looking for – a 2015 Dodge Ram pickup truck with low mileage within his price range.

To buy it, Vance, in March, told the 41 Action News I-Team he made the four-hour drive from his Oklahoma home to Lawrence Kia and met with a salesman.

"He told me that the Ram was gone, that it had been sold the night before," Vance said.

Vance claimed that after getting the runaround for hours, he ultimately bought a far more expensive Ford F-150 pickup truck.

The 41 Action News I-Team was able to obtain Vance's original online credit application to Lawrence Kia. The retiree wrote, "looking for a half ton truck around $400 or less monthly."

The I-Team showed Vance the document, and he confirmed in the application he filled out that his total monthly income was $2,000.

However, Vance also discovered Lawrence Kia submitted his loan application to his lender, claiming Vance's monthly income was $9,961, or nearly five times what Vance put in his credit application.

"If I had done that to somebody, I'd be in prison," Vance said.

As a result of the income disparity between the credit and loan applications, Vance's monthly payment for his pickup truck is nearly $1,000.

Kavanaugh, the former employee, left his job at Lawrence Kia in April because he said his business reputation was being damaged by the dealership's business practices. Part of his job was to handle customer complaints.

He said he received numerous phone calls from customers complaining that he had inflated their incomes on their loan applications. But Kavanaugh told the I-Team only sales managers can submit those applications.

He said those sales managers each have a login and password to do it, and he never had either one.

Kavanaugh said he believes he was set up to be the fall guy for the dealership's scheme by a former employee and the owner, Chin Rajapaksha.

He said the final reason to leave Lawrence Kia was when he was given a list of customers to call, he provided the I-Team to see if the former employee had contacted them.

Kavanaugh said every one of those customers had their incomes on their loan applications inflated.

It was at that point Kavanaugh said he realized how widespread business practices he'd been questioning for months really were.

"From the short time that I became involved, roughly a couple of months, I uncovered hundreds of deals," Kavanaugh said. "Every time, the income was inflated."

When the I-Team spoke to Codey Cole in March, he was finishing up his senior year at the University of Kansas.

As a Jayhawk scholarship football player, when Cole filled out his credit application with Lawrence Kia, he stated that he made $1,500 a month – his income from his scholarship stipend.

The I-Team obtained a copy of the loan application Lawrence Kia submitted to his lender. It showed Cole's monthly income as $3,500.

After the I-Team showed Cole the inflated income on his loan application, he went to Lawrence Kia to demand answers.

"They got real, I want to say paranoid about the situation and told me I wasn't allowed to come back and I had to speak to their attorney," Cole said.

Another Lawrence Kia customer, Sasha Jefferson, said she entered the accurate amount of her monthly income. When the I-Team spoke to her in March, she said she didn't think twice about it when she submitted her credit application to the dealership.

Then she later found out Lawrence Kia had increased her monthly income from $3,103 on her credit application to $4,403 on her loan application.

That fact was confirmed in a letter last December from Jefferson's lender, Wells Fargo, to her. In a copy of the letter the I-Team obtained, it said, in part, "We have reached out to the dealership and confirmed that the income was altered and that the dealership is willing to take the vehicle back and unwind the deal."

Jefferson eventually reached a settlement with the dealership.

According to Kavanaugh, it included a payoff of her vehicle loan and an undisclosed cash payment in exchange for Jefferson signing a waiver stating she wouldn't file a lawsuit against Lawrence Kia.

Jefferson declined to give specifics of the settlement. But after being told Kavanaugh was responsible for inflating her income on her Wells Fargo loan application, she decided to go after him individually for a cash settlement.

"He offered to make it go away not once, not twice, but three times," Jefferson said.

Jefferson provided the I-Team an email exchange with Kavanaugh to support that claim. When she threatened to sue him in a Feb. 6 email, Kavanaugh offered "$5K for a complete release and settlement."

Kavanaugh said dealership owner Chin Rajapaksha offered to front the money for a potential settlement, but no deal was ever reached.

"And the reason I did that was to avoid any protracted litigation with her," Kavanaugh said.

Kavanaugh denied any involvement in submitting any deals, including inflated income loan application deals, to any lenders and also denied any wrongdoing in Jefferson's case.

"I had nothing to do with it," Kavanaugh said, "and I just could not continue to be under that pressure."

One mess Kavanaugh said he helped clean up was Nautica Emberton's case.

"I feel like I was set up," Emberton said in May.

Records the I-Team obtained show Emberton submitted a credit application to Lawrence Kia, stating her total monthly income was $1,600. But the application Lawrence Kia sent to Emberton's lender showed she made $4,311 a month.

"I can't even comprehend how they're getting away with it," Emberton said.

Kavanaugh said it wasn't easy, but he was able to get Rajapaksha to agree to reverse Emberton's deal.

Kavanaugh himself picked up the car from Emberton and gave her a $500 check for the car she traded in which had already been sold.
The problem was it left Emberton without a vehicle.

"I actually ended up going into a significant amount of debt trying to get another car afterward and it ruined my credit," she said.

In that email exchange, another Lawrence Kia sales manager asked Morrissy, "KEVIN WHAT DID YOU DO?"

Morrissy's email response about the Emberton deal was "CLEARLY MADE $$$$".

The I-Team tried to call Morrissy and also sent him a text message, so far, without response.

But documents the I-Team has obtained show it wasn't just Morrissy who submitted loan applications to lenders with inflated customer incomes.

While Kavanaugh said the sales people had no idea what was happening, the I-Team's documents show, and Kavanaugh confirmed, other sales managers, in addition to Morrissy, submitted loan applications to lenders with inflated customer incomes.

"I think the people who submitted the deals, I think they should be held accountable," Kavanaugh said.

In addition to Emberton, Jefferson, Cole and Vance, the 41 Action News I-Team has obtained dozens of other Lawrence Kia (and sister dealership Lawrence Mitsubishi) customer credit applications and the subsequent loan applications the dealership sent to lenders.

In every instance, the dealer inflated the customer's monthly income in the loan applications.

Kavanaugh also said most lenders won't consider a loan to anybody who makes less than $1,500 a month without a co-signer.

Cole was right at that threshold and Emberton just above it.

Of the roughly 40 customer credit submissions and the accompanying loan applications the I-Team obtained, five of the customer reported monthly incomes were well under $1,500 a month.

They include an 18-year-old shoe saleswoman. Her total monthly income was reported at $870. Kia's loan application to her lender said she made $2,100 a month.

A 19-year-old supermarket clerk listed his total monthly income at $600. Kia's loan application to his lender said he made $2,750 a month.

A 23-year-old waitress listed her total monthly income at $628. Kia's loan application to her lender said she made $2,400 a month.

A now 22-year-old waiter at a fast-food restaurant listed his total monthly income at $1,161. Kia's loan application to his lender said he made $3,361 a month.

A 23-year-old convenience store clerk listed his total monthly income at $612. Kia's sister dealership Lawrence Mitsubishi's loan application to his lender listed his monthly income as $5,691, or more than nine times what the clerk reported.

"The higher payment you can get, the customer can pay for the car, the more products you can put into the loan," Kavanaugh said. "And obviously, you can't do that with somebody who makes $600 a month, much less sell them a car."

"I've got nothing to say to you," Rajapaksha said as he walked away, went into his office and closed the door.

A document Jefferson sent to 41 Action News showed Rajapaksha was aware of her case last November.

He wrote, in part, "I'm looking to settle this matter at your earliest convenience" and offered Jefferson options including voiding her car deal.

All the customers who talked to the I-Team said they had some type of contact with Rajapaksha about the inflated incomes listed on their lender loan applications.

"I think that they are all responsible," Emberton said. "I think Chin is responsible for allowing his employees to do that."

Kavanaugh said that if Rajapaksha "had said when the first person came forward, 'Stop,' it probably would've stopped."

While Rajapaksha declined to speak to the I-Team, the dealership's attorney sent an email. Referring to all the credit applications the I-Team has obtained, it stated in part, "Lawrence Kia contacted local authorities about the data breach."

As for the income alterations on those applications, the attorney wrote, "Lawrence Kia has made every effort to reach out to customers who have or may have concerns about the information submitted to their lender."

"Clearly egregious falsifications of income," Spies said. "So looking at that, I submit you likely have numerous federal violations here."

Spies said those violations could include bank, wire and mail fraud.

"Considering the number of documents that you presented here, how many occurrences are present, it says to me there was a purposeful scheme," Spies said.

He said if federal investigators uncovered enough cases, an organized crime or RICO case could be brought against Lawrence Kia, which would include the possibility of both criminal and civil penalties.

"Considering the number of situations you're talking about, I think that is something that would really interest the United States Attorney," Spies said.

At this point, it's unclear if federal authorities will investigate Lawrence Kia.