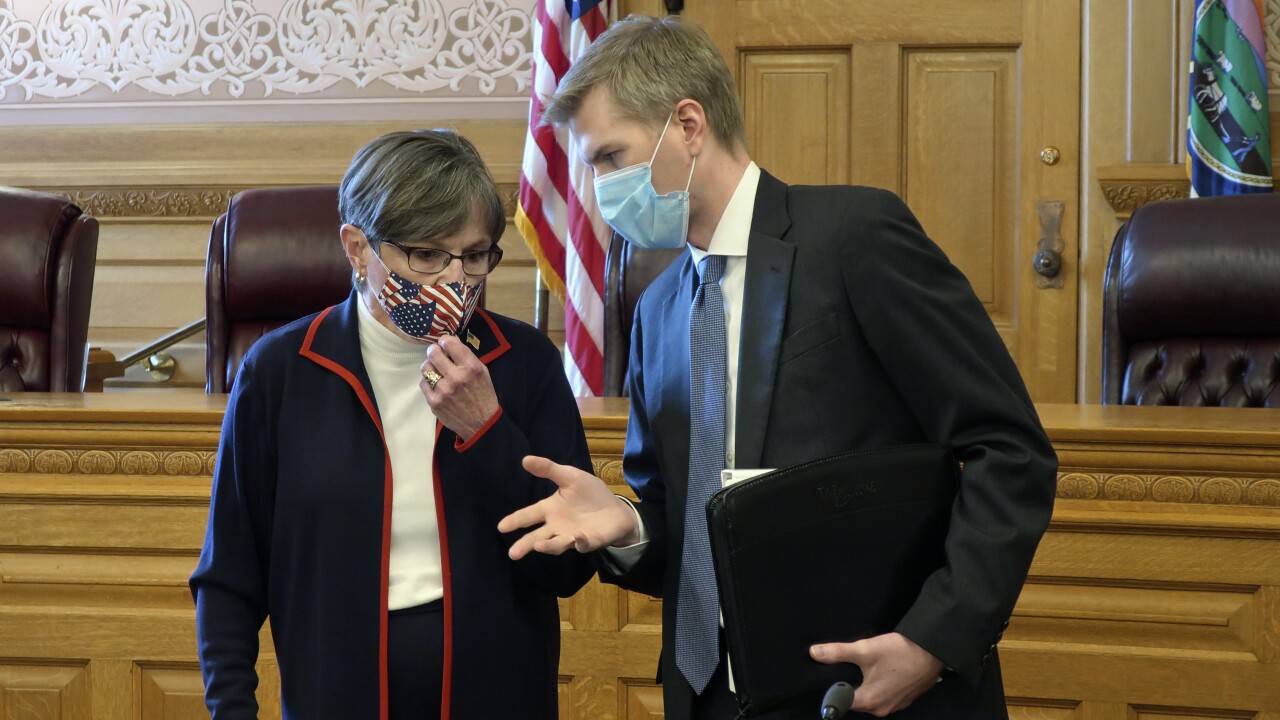 (Copyright 2020 The Associated Press. All rights reserved. This material may not be published, broadcast, rewritten or redistributed.)
John Hanna/AP
Kansas Gov. Laura Kelly, left, confers with Clay Britton, her chief attorney, before a meeting with legislative leaders about an executive order she issued to require people to wear masks in public, Thursday, July 2, 2020, at the Statehouse in Topeka, Kan. Kelly says she's worried that if the state doesn't reverse a recent surge in reported coronavirus cases, the state won't be able to reopen K-12 schools in August.

KANSAS CITY, Mo. — Less than a week after Kansas Gov. Laura Kelly pledged to consider all avenues for a statewide mask mandate, there will be no such order after a meeting Tuesday afternoon in Topeka.

Instead, leaders from both major political parties pledged to work together in hopes of increasing voluntary mask usage in the state.

Kelly met with Kansas legislative leaders Tuesday to discuss the ongoing COVID-19 outbreak, which has claimed nearly 1,000 lives and infected more than 80,000 people in Kansas since March.

“Legislative leadership agreed to work with me through a strategy of engagement with municipalities, counties, and stakeholders to increase the use of masks and mask requirements across the State of Kansas,” Kelly said in a statement after the meeting. “It is my hope that this bipartisan outreach strategy will avert the need for emergency legislation through a special session.”

Republican leaders in the House of Representatives also issued a statement after the meeting, indicating they would cooperate in helping increase mask usage.

The House leadership statement emphasized “voluntary collaboration” with the effort: “All agreed to seek strategies to improve public education and voluntary collaboration to increase the use of masks rather than a special session and legislation. We call on all Kansans to practice personal responsibility and compassion for their fellow Kansans by wearing a mask, practicing social distancing, and proper hygiene. This is the right thing to do. In the words of the former U.S. Senate Chaplain, Peter Marshall [sic] ‘May we think of freedom, not as the right to do as we please, but as the opportunity to do what is right.’”

Kelly enacted a mask mandate by executive order in early July, but many counties opted out. She called it a make-or-break moment at the time.

The number of COVID-19 infections and deaths has exploded in Kansas during the last three months, but especially in September and October after schools reopened.