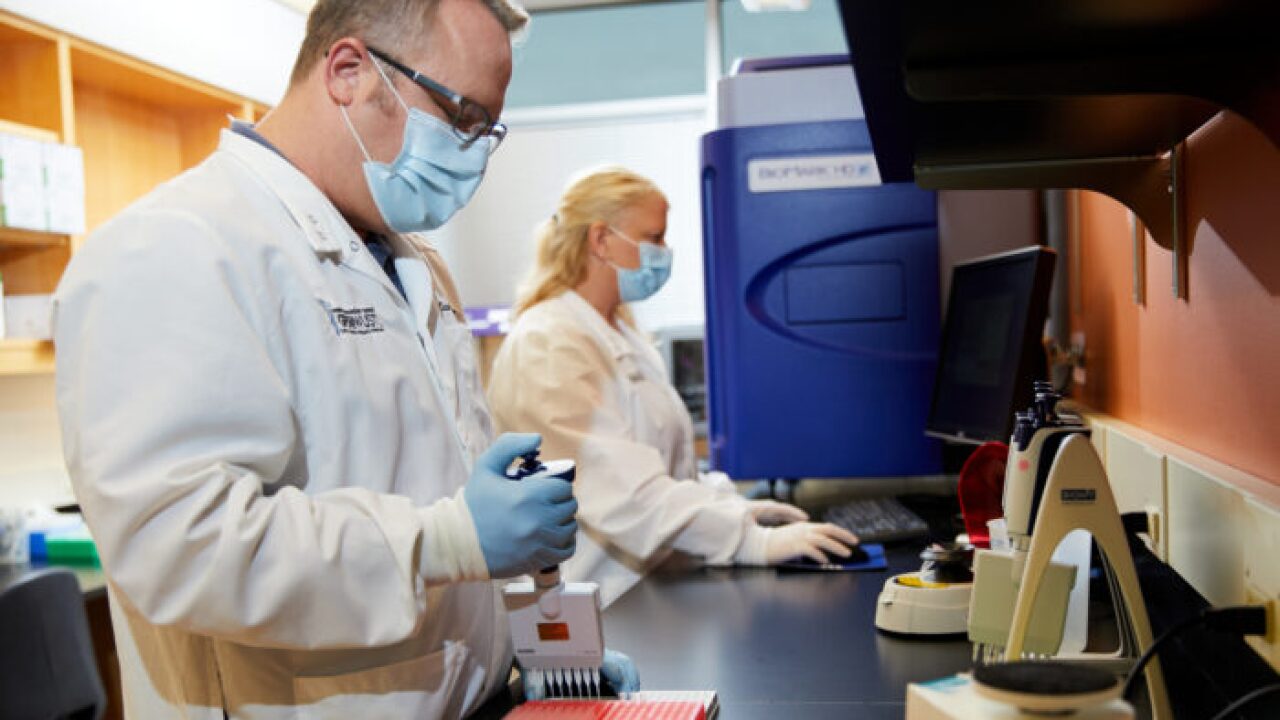 Copyright 2020 Scripps Media, Inc. All rights reserved. This material may not be published, broadcast, rewritten, or redistributed.
Matt Miller/Washington University School of Medicine in St. Louis
Washington University has developed a saliva-based test for COVID-19 that is faster and easier than the swab tests currently in use. Chris Sawyer, Lab Manager, and Lauren Burcea, Clinical Lab Manager, work on the program at the Genome Technology Access Center in Cortex One on June 30, 2020.

KANSAS CITY, Mo. — Kansas City will receive one of the four machines purchased by the state of Missouri to read a new saliva-based COVID-19 test.

Missouri Gov. Mike Parson made the announcement Wednesday during a Facebook live briefing from the governor’s mansion, where he remains in isolation without symptoms since testing positive for COVID-19 last week.

He also announced that he and his wife, Teresa, who also tested positive for COVID-19 last week, had recovered and would resume a normal schedule next week.

Parson said the state has purchased four machines capable of reading the saliva-based test developed by Washington University, which received approval from the U.S. Food and Drug Administration in August.

“This test is a major development in COVID-19 testing technology that will help us expand laboratory capacity and testing volumes even more,” Parson said.

Washington University, which is based in St. Louis, also has a machine that can read the test.

The state’s other three machines will be placed in southwest, southeast and central Missouri.

Each machine requires “proper infrastructure and trained personnel to operate,” so the state is working to establish a training plan for the new technology.

Testing capacity has been one of four pillars for the Parson’s administrations response to the COVID-19 pandemic.

Parson also declared Missouri’s planning for a vaccine rollout, when one becomes available, a model for other states.

He said a panel has been working on a vaccine distribution since late August after receiving $3.2 million from the Centers for Disease Control and Prevention.

“Although there remain many unknowns about a vaccine, we remain optimistic and are prepared to take action as soon as a vaccine is approved,” Parson said.

After shedding more than 346,000 jobs between February and April, Parson said Missouri has recovered 200,000 jobs and consumer spending has rebounded “at or above pre-COVID levels since late August.”

Finally, Parson said reconvening the legislature is for a COVID-19 liability package for businesses is a priority, but he would want a framework in place before calling legislators back to Jefferson City.

The legislature also may have to reconvene before the Nov. 3 election to discuss the state’s supplemental budget, if and when new federal money is appropriated for Missouri’s COVID-19 response.