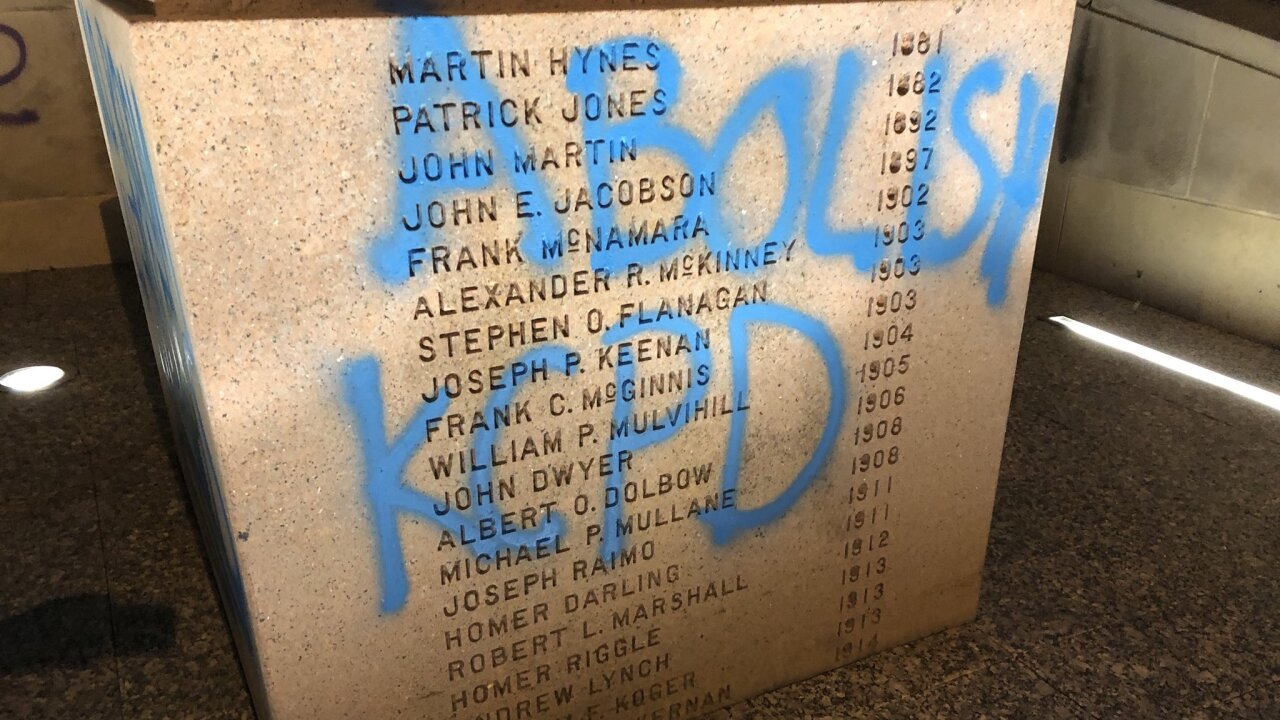 Darrius Smith/KSHB
Demonstrators vandalized the entrance to the Kansas City, Missouri, Police Department Headquarters and a police memorial to officers who died in the line of duty Friday night downtown.

KANSAS CITY, Mo. — Demonstrators vandalized the entrance to the Kansas City, Missouri, Police Department Headquarters and a police memorial to officers who died in the line of duty Friday night downtown.

Obscenities were spray painted across the doors and on the base of a statue dedicated to slain officers during the fourth hour of a protest in opposition to Operation LeGend, a Department of Justice initiative to involve federal agents in violent crimes investigations in KCMO.

Organizers also called for defunding KCPD by 50% and investing the money in housing, health care and education, but it’s unclear if the Sunrise Movement Kansas City, which sent a media advisory about joining forces with other Black organizations for the planned protest at 6 p.m.

The gathering had been relatively peaceful aside from a few suspected fireworks that were ignited shortly after 9:30 p.m., but KCPD officers kept their distance or stayed inside for the most part.

Make that 3. Seems like a firework of some sort.

According to KCPD, several of the approximately 150 protesters were arrested for property damage or assaulting an officer.

An unknown numbers of officers suffered minor injuries, while one protester was hurt while running away when they tripped and fell, according to KCPD.

A group of appx. 150 protestors gathered tonight at HQ, they marched in the area and later spray painted parts of the statue and front doors. Several were arrested for property damage and assault on officers. As of 11:15p no projectiles or tear gas have been deployed https://t.co/Aq062vqCc0

The property damage occurred around 10:30 p.m. and police decked out in riot gear emerged shortly after and begin moving demonstrators from KCPD Headquarters.

Protestors and KCPD are lined up opposite each other along 12th St. PD has on helmets, some with gas masks, some with the clear face shields. Several officers with less-than-lethal-projectile rifles on hand.