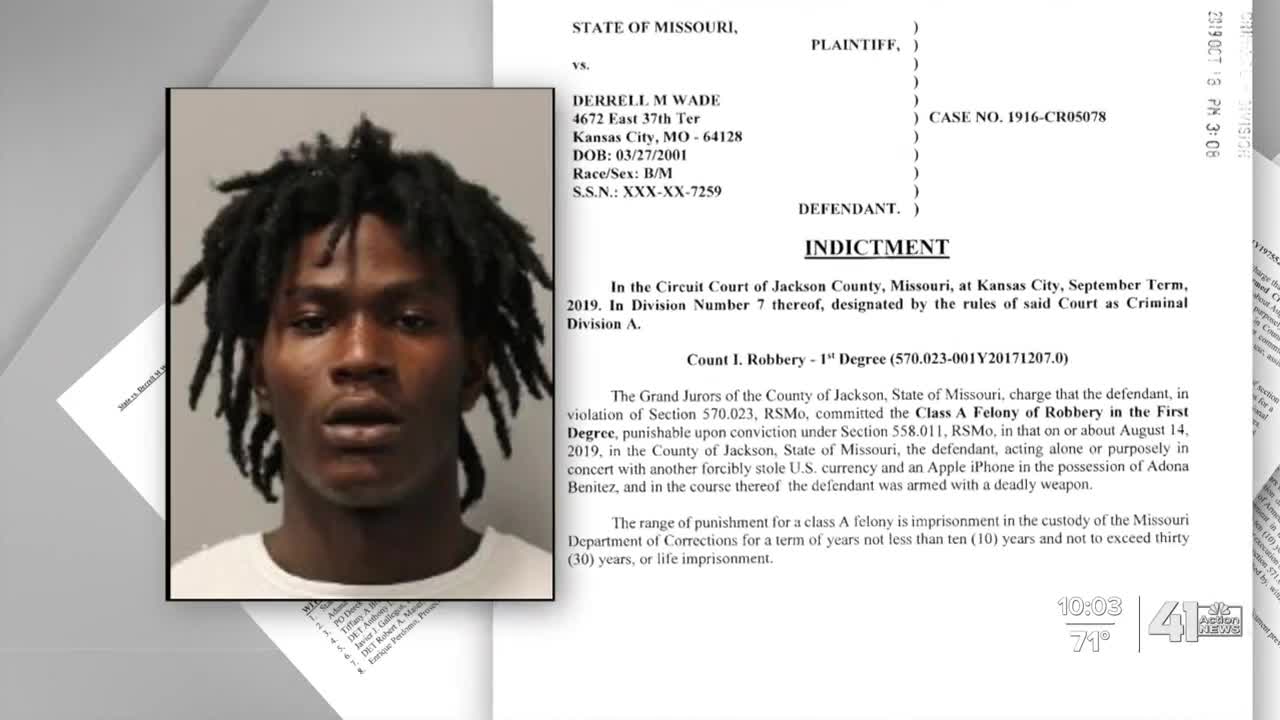 A Kansas City man accused of leading police on a high-speed chase in a stolen car which resulted in a deadly crash was released from jail on his own recognizance in April, despite six pending felony charges against him. 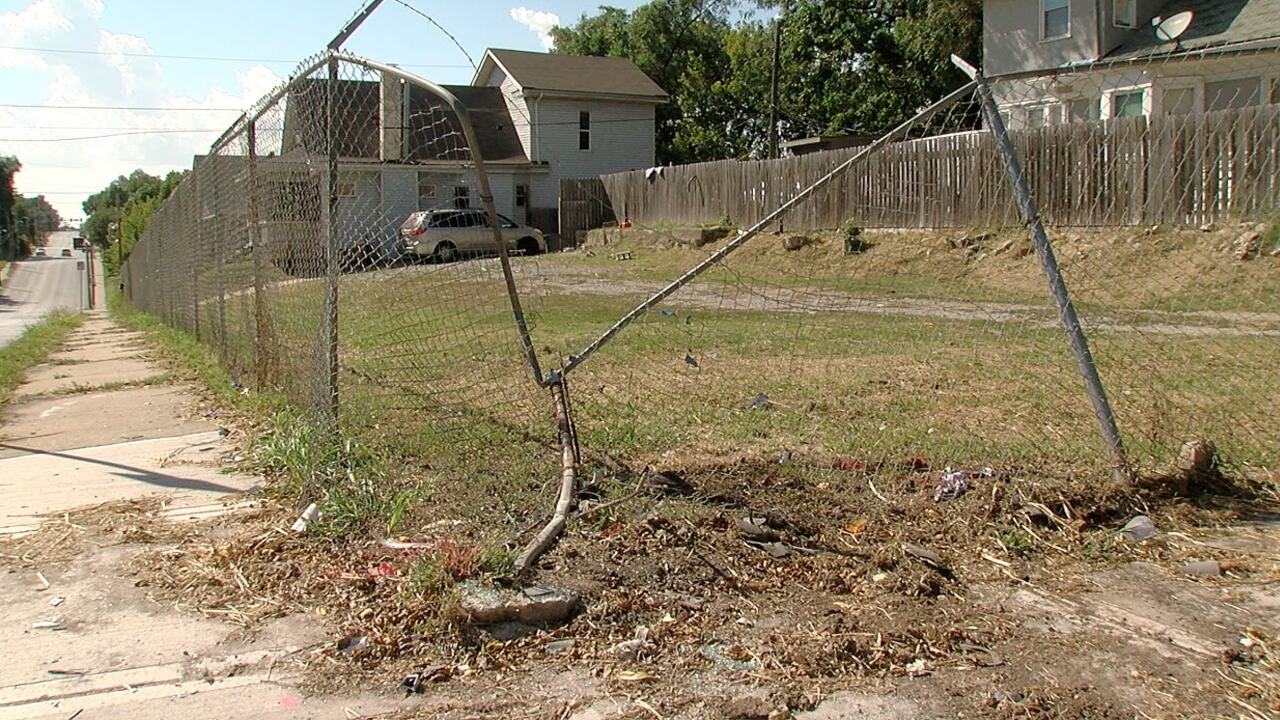 KANSAS CITY, Mo. — A Kansas City man accused of leading police on a high-speed chase in a stolen car which resulted in a deadly crash was released from jail on his own recognizance in April, despite six pending felony charges against him.

Derrell Wade, 19, was ordered to stay out of Kansas City as part of his release from jail in April.

Instead, federal court records claim Wade was driving a stolen car with Curtis Daniels and Michael Brown as passengers on Aug. 24 when he crashed into Ricky Donaldson’s car, killing him.

According to his Facebook page, Donaldson, 52, was a Chiefs fan, a graduate of Southeast High School, a former Johnson County Community College student and a former employee at the Shook, Hardy & Bacon Law Firm in Kansas City.

His friend Ted called Donaldson “a good man and a good friend."

Cyndi Juarez ran outside her home when she heard the crash on her block.

“It is scary. We have two nieces that live here with me. That’s why we don’t let the kids out here a lot or pets out here just because this is really a bad area where a lot of people wreck a lot,” Juarez said.

According to investigators, it all started at an apartment complex.

Court records state a man was returning home when Wade and his friends allegedly robbed him at gunpoint.

Wade, Daniels and Brown are accused of taking the man’s cellphone and his car keys and then leaving in his car.

The 41 Action News Investigative Team showed a picture of Wade to a resident of that apartment complex.

That resident told the I-Team she witnessed Wade point the gun at the victim from an apartment building window.

Court records further state Kansas City, Missouri, police officers spotted the car about a half hour after it was reported stolen heading southbound on Lister at about 23rd Street.

When Wade, Daniels and Brown saw the officers, court records state they took off.

A high-speed chase of about a mile loop ensued, reaching speeds of up to 75 miles per hour before ending with a deadly collision at 23rd and Lawn, just a block west of where it started.

Donaldson died in the crash.

Brown ran away, but police caught him hiding near a grill in a family’s backyard.

Court records state Wade limped out the car, pulled a gun from his waistband and tossed it on the ground.

Those same records state officers found the victim’s cellphone at the crash site.

"We did see the police dog out here. They were looking for something," Juarez said.

Court records show that arrest for carjacking and the fatal crash arrest was not Wade’s first run in with the law.

Those records also say in August 2019, Wade and two associates followed two men both into and out of the Jubilee Market at 24th and Van Brunt.

Investigators then say a short time later, Wade stole one of the men’s wallets and shot him in the knee.

The incident was captured on a surveillance camera outside Hope City, a neighborhood church and community center.

He heard what he said was the clear motive for shooting the victim on that tape.

"And because he did not have any money, they actually shot him,” Bickle said.

The court records also state after Wade shot one of the victims, he and his associates then robbed the second man.

However, eight months after his arrest and charges, court records show Wade asked for and was granted a bond reduction.

He was released from jail on his own recognizance with the conditions he have no contact with the victim, could not possess any firearms and must live with his mom in St. Louis.

Not abiding by that agreement months later in Kansas City, Wade now faces federal charges in the carjacking and fatal crash.

"I think he's one of a hundred people I've seen in the exact same situation. This neighborhood is inundated with violent criminals who have been released for violent charges," Bickle said.

Jackson County Prosecutor’s spokesman Mike Mansur said COVID-19 concerns, Wade's young age and his promise to stay with his mom in St. Louis were all factors in Wade’s release from jail.

It came after Bergus filed a motion on Sept. 1 for the judge to appoint a special prosecutor in Wade’s case because Donaldson, the victim in the Aug. 24 crash, is related to an employee of the Jackson County Prosecutor’s Office.

Judge Justine E. Del Muro also revoked Wade’s bond in the case and adjusted it to $75,000, or ten percent of that amount.

Defense attorney Tracy Spradlin, who’s not associated with the Wade case, told the I-Team the Missouri Supreme Court’s Bond Reform Act in 2019 places the burden on the state to keep a suspect in jail.

Spradlin said the state needs to prove the suspect is a flight risk because of missing previous court dates or is a danger to the community.

She also said the act means bonds must be affordable for the suspects.

In his original bond document from the 2019 case, it states “Wade poses a threat to the victim as he shot the victim while depriving him of his property”.

However, despite the bond document, Judge Del Muro approved Wade’s release from jail on his own recognizance in April.

In an added twist, the I-Team confirmed Wade was in KCPD custody three days before the carjacking and fatal crash.

The I-Team tracked down Wade’s girlfriend who asked to be referred to as Monea.

Monea said Wade was there at the time of the scuffle, but said he wasn’t involved.

“It was a false police report. Everything that she said was false,” Monea said.

No charges were filed in the case and everyone, including Wade, was released from custody.

Wade’s release came despite an apparent violation of his bond agreement in the 2019 robbery and shooting case.

Again, court records show Wade was supposed to be living with his mom in St. Louis while waiting for that 2019 case to be resolved in court.

However, KCPD Sgt. Jacob Becchina told the I-Team it "would not be standard practice for a detention person to have access to a bond order or pre-trial conditions. The onus to enforce a bond order would be on the courts."

Becchina also said KCPD detectives are waiting for some records from a state agency regarding the initial confrontation.

Once they get those records, Becchina said the detectives will submit the case file to Jackson County for the prosecutor's decision to file charges or not.

Mansur confirmed there’s no record to show KCPD ever contacted the Jackson County Prosecutor’s Office about Wade’s detention in the assault complaint, because as Becchina stated, KCPD didn't submit the case file in that case before the carjacking and fatal crash charges.

For those reasons, Wade was released from custody.

A few days later, Wade was accused of the carjacking and crash that killed Donaldson.

Wade was denied bond on the federal charges in the carjacking and fatal crash case.

For that reason, he remains in federal custody.

His trial in state court for the 2019 robbery and shooting case is scheduled for next year.