'He was a firefighter. That was enough': Contractors break Liberty family's trust 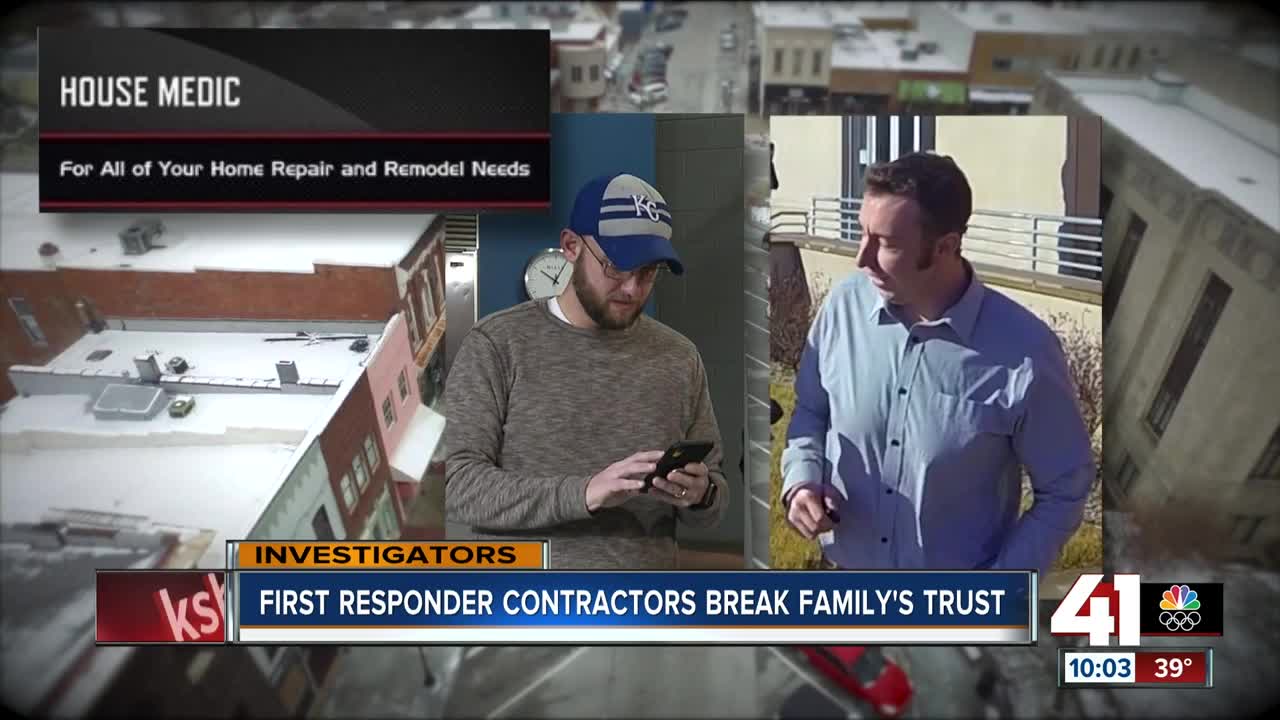 From a young age, there are certain groups of people we're taught to trust implicitly. One of them is first responders. It was that trust that led one Liberty family to hire a contracting company that later left them in the dust. 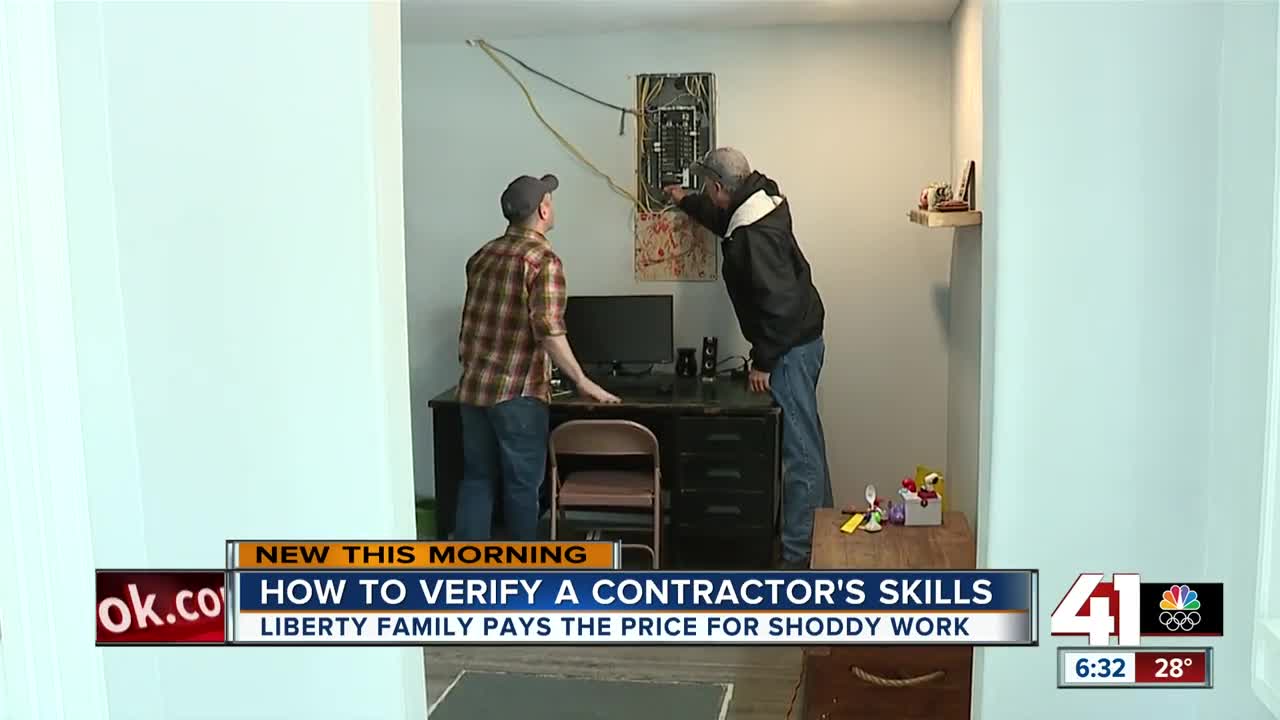 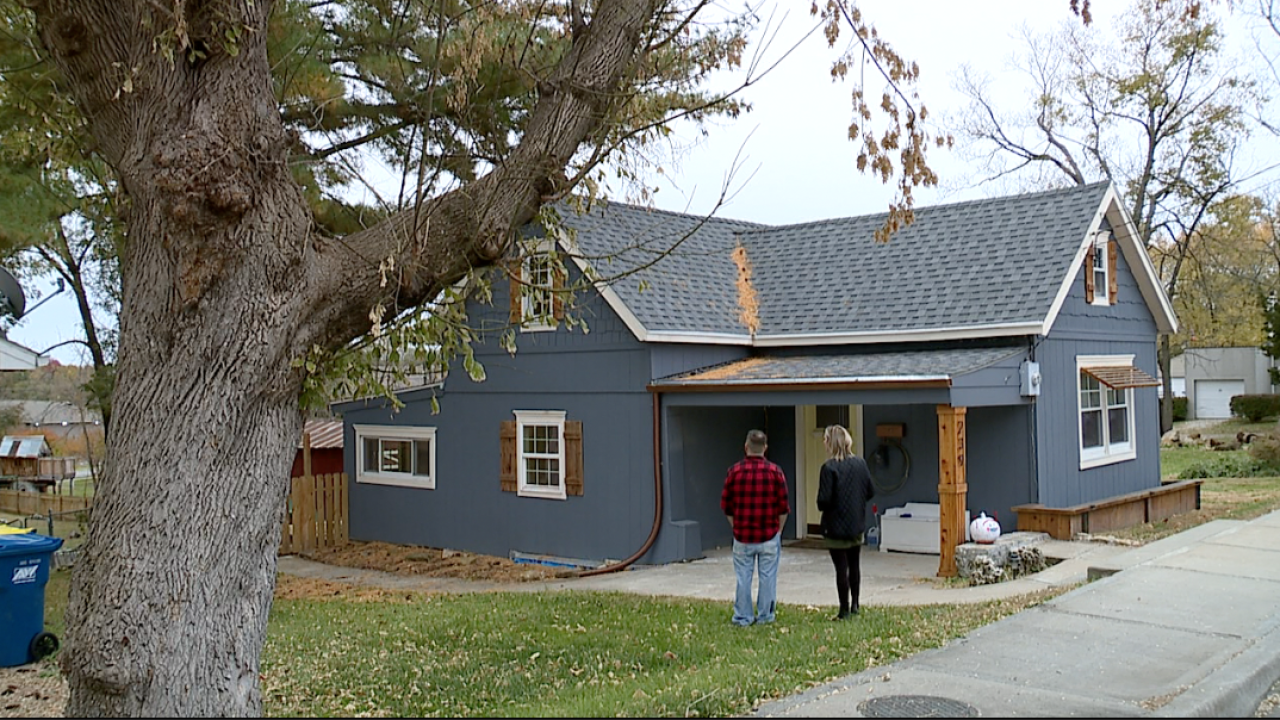 LIBERTY, Mo. — From a young age, there are certain groups of people we're taught to trust implicitly. One of them is first responders.

It was that trust that led one Liberty family to hire a contracting company that later left them in the dust.

"Who do you not trust more than firefighters? I was like, 'We've got to hire them,'" Heather Stephens said.

Stephens and her fiance David Hindle had been inspired by Chip and Joanna Gaines to buy the worst house in the best neighborhood.

For $20,000, they got a historic fixer upper near downtown Liberty. Over the course of three painstaking years, the house came together piece by piece.

"I helped hang, mud, sand and paint 136 sheets of drywall, so it was very tedious work, but in the end it was all worth it," Tabitha Brooks, their 17-year-old daughter, said.

By early 2019 the family decided it was time to turn to the professionals for electrical and plumbing work. They needed to upgrade the home's old fuse box and have some sewage pipe and water lines run.

"We wanted to get it done right. We weren't looking to cut any corners," Hindle said.

They posted on Facebook Marketplace and soon got a response from a man named Josh Faller. In his initial message, Faller told them he and a fellow firefighter owned a remodeling company called House Medic.

He assured the family they were licensed and insured and explained he was the electrician, while his partner was the plumber.

"He was a firefighter. For me, that was enough. I was going to believe anything he said to me," Hindle said.

Just a couple days later, in January 2019, Faller and his partner Bobby Schieber were on the job. Hindle said he paid them $2,500, which covered labor and materials.

After looking at the work, Hindle wasn't sure where his money had gone.

"There wasn't one thing that they did that was right. It was all... horrible. It was horrible," he said.

The men initially promised to fix the work, but Hindle said Faller stopped returning his phone calls and texts.

According to Hindle the plumbing work had to be redone, and the new fuse box was never hooked up. The whole debacle delayed their move-in date by several months.

The problems didn't stop there.

She was referring to a cease and desist letter House Medic sent to Hindle, threatening a lawsuit if he didn't stop contacting them.

It was a bold move by a company that, according to the city of Liberty, didn't even have the required city business license to perform work. The deputy city clerk also could not find any record of plumbing or electrical craftsman licenses for either man.

Schieber shared a copy of the only business license he was aware of, which was for general contracting in the city of Richmond.

According to House Medic's filings with the Missouri Secretary of State's Office, the company was created to perform "window and door installations."

The 41 Action News Investigators brought in a licensed electrician to take a look at the work.

"The range plug back here is not mounted. They didn't use a connector to protect the wire," Dave Schmitt of Midwest Electrical Service said while looking at the wall behind the stove.

"Lazy" and "sloppy" were two of the words he used to describe what he saw.

"It's just ridiculous that somebody would actually think that's okay," Schmitt said, pointing to wires in the new fuse box.

The 41 Action News Investigators also learned Hindle and his family weren't the only upset customers.

A Bates City couple took House Medic to small claims court in May 2019, detailing a similar experience with the company.

According to a court petition, Eric and Heather Strader hired House Medic to complete carpentry work on a staircase and to reinforce the truss on a barn, but the finished job left a lot to be desired.

"It is just poor craftsmanship from inexperienced carpenters who did not know their codes before starting a project," the couple wrote.

Schieber and Faller initially promised to fix the work the couple was unhappy with, but the men later sent an e-mail saying that the customers could never be satisfied, so they would not return to the property.

The 41 Action News Investigators reached Bobby Schieber first. In a bizarre phone call, he told consumer reporter Cat Reid House Medic never worked on Hindle's home, nor did they accept money from him.

It's the same story his partner, Josh Faller, later told.

"The work that was performed in those pictures was not performed by House Medic," Faller said.

The 41 Action News Investigators initially found the Liberty firefighter behind bars. He had been charged with domestic assault and unlawful use of a weapon.

After the arrest, Faller resigned from the Liberty Fire Department. A city spokesperson said he had already been placed on administrative leave in October for "personnel issues." The spokesperson confirmed he will still receive his pension, regardless of the circumstances under which he left.

The 41 Action News Investigators caught up with Faller outside a court hearing for his criminal charges.

"Why are you guys doing work you're not qualified to do?" the 41 Action News Investigators asked.

He went on to say that he "never performed any unlicensed work" and insisted he was a licensed electrician.

That's something Faller could never prove, despite our requests that he send us a copy of his license.

However, Bobby Schieber, his partner, decided to sit down with the 41 Action News Investigators and tell his side of the story.

"Josh was a friend, and I was trying to protect him, and after I sat and thought about it, you know, it's not worth it. Not worth it," he said.

Schieber claimed his role at House Medic was to focus on the work, while Faller did the talking.

The two met more than 10 years ago while working at a fire department in another Missouri city.

Schieber works as an EMT now but clarified that he has not been a firefighter since 2017.

He said he was not comfortable with Faller describing him as a plumber in messages to the family.

Schieber also told the 41 Action News Investigators that he offered to go back and fix his work on the house.

However, after seeing the problems with their work, Hindle did not want the men to do anything else at his home. The family wanted House Medic to give them at least some of their money back or bring in someone who could fix the problems.

Schieber said he debated offering them a partial refund, but that never happened.

"I have nothing against the guy. If I had a million dollars, I would make everything right as best as I could, but I can barely support myself and my family, so I understand where the guy's at," Schieber said.

Meanwhile, Hindle and his family have been dealing with the consequences of House Medic's work.

"This is the gas stove we converted to propane just to get us by for a while until we figure out the electrical situation," Hindle said, showing us around the kitchen.

It's a situation they got into by giving their money to two men they thought they could trust.

"They could've done us right," Stephens said. "They could have turned the job down."