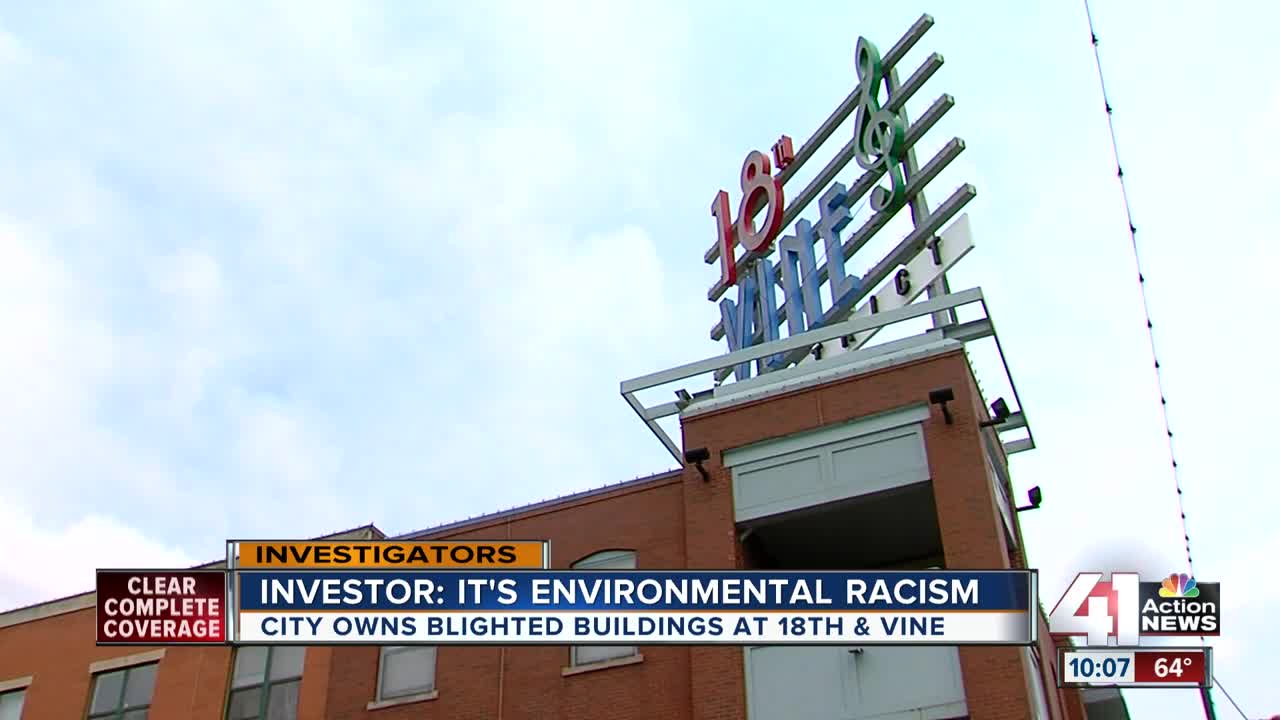 A property owner in the 18th and Vine District claims Kansas City leaders are engaging in "environmental racism" by not fixing up several city-owned blighted buildings in the area. Both Kansas City mayoral candidates say it will take an unspecified amount of time to fix those buildings. 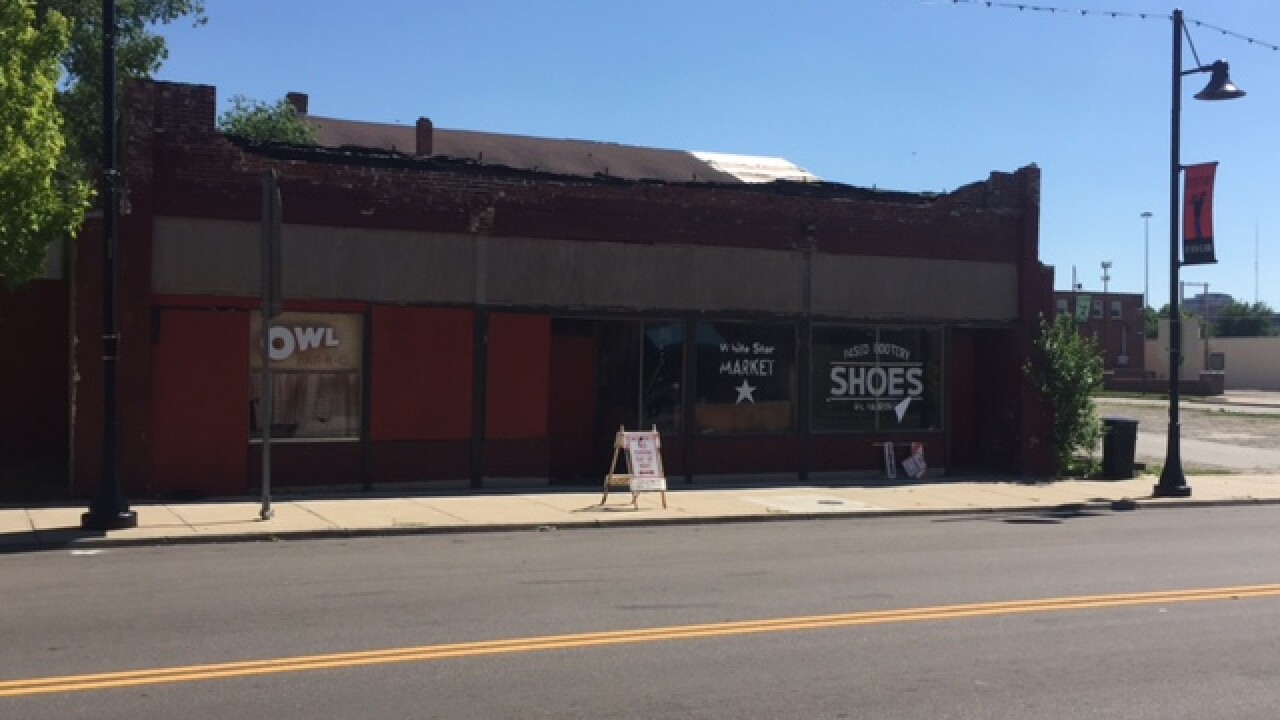 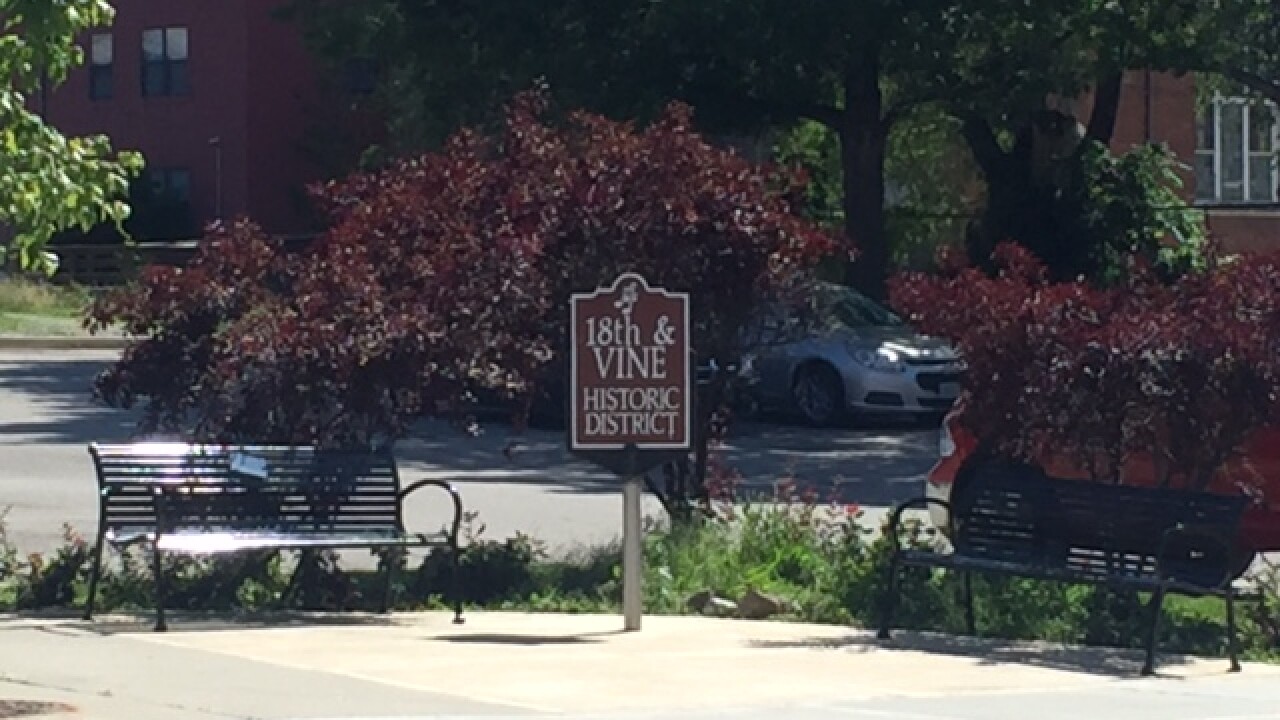 The new restaurant is part of the city's three-phase plan to renovate the district.

"I've always loved the 18th and Vine District. Ever since I got into culinary years ago, I wanted to be in this actual location," Moore said.

In sharp contrast to the new Soiree restaurant, directly across 18th Street sits a building with a rundown exterior that’s also caving in on itself.

Moore describes the building as an “eyesore.” Henry Service, owner of the Historic Lincoln Building on 18th Street and a major private investor in the district, has another term for it.

"It's environmental racism is how I would characterize it," Service told the 41 Action News Investigators.

According to records, the city not only owns the building across the street from Soiree but also nearly all of the property on that block, which is bordered by 18th Street on the north, Vine Street on the east, 19th Street on the south and Dr. Martin Luther King Jr. Boulevard on the west.

The only property the city doesn't own on that block is Holy Ghost New Testament Church at 1815 Dr. Martin Luther King Jr Boulevard.

Recently, Service posted pictures on Facebook of several blighted buildings in major disrepair, including ones on that city block.

Service said the look of the block hurts property owners in the area.

“It's hurting all of us,” he said. “We're trying to survive here, and we're not asking for handouts. We're just asking the city to fix up its own property.”

The city bought large chunks of property in the 18th and Vine District after the Kansas City Council approved a $27.6 million plan to renovate the area in 2016.

The most recent report updating that progress was released last year.

There has been some progress in the area since that time, including the renovations and leasing of the city-owned buildings on the north side of 18th Street, where Moore and other business owners are renting space. It also includes the partial restoration of the Gem Theater.

Councilman Quinton Lucas, a member of the 18th and Vine Development Policy Committee, represents the Third Council District, which includes the area. He’s also one of two candidates in the running to become Kansas City’s next mayor.

If elected, he said he hopes to see progress made in the 18th and Vine District during his term in office.

"Four years from now, I want to say that we've got more stores,” Lucas said. “I want to say we have more restaurants, and how about this as a measure, that we've doubled the annual sales tax output for this area.”

Councilwoman Jolie Justus, the other candidate in the mayoral race, has served on the council’s Finance Committee, which reviewed the city’s lease for the Soiree restaurant.

Justus said she's committed to the continued improvement of the 18th and Vine District, including the currently blighted city-owned buildings.

"We are right now structurally making sure they're sound. We're working with our city architect to make the changes necessary to bring in retailers," Justus said.

Both Justus and Lucas envision a future 18th and Vine District with more foot traffic and more retail and lunch opportunities during the day and entertainment at night.

"I don't think this will be done in one month. It won't be done in one year," Lucas said. "But what we're really trying to do is create that 24/7 environment. The best thing we can do about the blighted properties is to create a market for folks to be in them, to renovate them or to rebuild."

Justus said the area has already come a long way in the last decade.

"What we've seen on the council over the last two to three years is that we're moving forward with 18th and Vine, and I'm really excited about it,” she said. “You're starting to see us fill up with retail opportunities. Five years ago, 10 years ago, there wasn't a lot going on. We had just a couple of things.”

Currently, the city not only owns a large chunk of land in the district, but it's also a major landlord of properties in the area.

Lucas said he believes the city may be too involved.

"I don't want large City Council oversight because, frankly, you know those of us in elected office aren't people that can naturally run businesses, museums, entertainment stops,” he said. “We're not business people, and we're not always the best ones at making sure that we'll actually long-term address the business issues.”

Justus said the city should keep working to attract more businesses to the area.

"When the city started restoring the buildings, which is exactly what they're doing right now, we started to see the change,” she said. “We need to keep our foot on the gas. We need to make sure that the investment that we're making, that the new businesses like Soiree that we're bringing in, that we continue to attract more of those businesses. If there are opportunities to sell off some of the properties to folks that are going to bring in businesses that the neighborhood wants, then we are open to that.”

Service, however, is skeptical of the candidates’ promises.

"Everybody comes down and campaigns for the black vote and yet they treat the black community, especially at 18th and Vine, like outcasts," he said.

Moore, owner of the Soiree restaurant, said that she believes change will come to the area.

"That's why I'm here. It's going to take time to change, but I believe that we're on the right track," Moore said.

But exactly how soon that change will come is unclear.

City leaders, as part of the three-phase plan for 18th and Vine, have no definite timetable for either fixing the blighted buildings or selling them to developers.

Service, who’s also an attorney, is representing a woman who owns property on the east side of Vine Street.

Court records show the city is trying to take the building from her because it's blighted, which Service said is hypocritical given the condition of many city-owned buildings in the area.

Service also said that unlike nearby city-owned buildings, his client is in the process of fixing her building.

Page 1 of City of KCMO vs. Lisa Walker Yeager