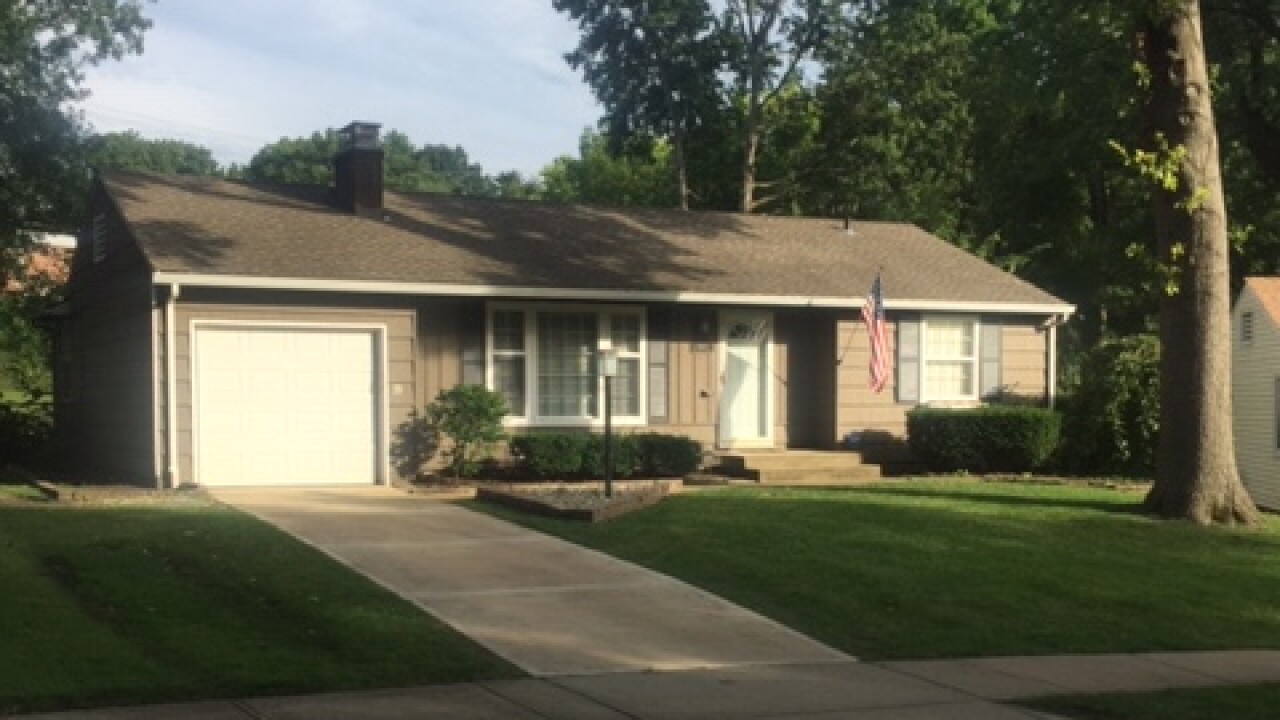 Copyright 2021 Scripps Media, Inc. All rights reserved. This material may not be published, broadcast, rewritten, or redistributed.
Andy Alcock/KSHB
The Kansas City, Kansas, firefighters' union is calling for Chief Mike Callahan's ouster after union members learned he had been living in Prairie Village the last 13 months while building a new Wyandotte County home. Pictured is the Prairie Village residence. 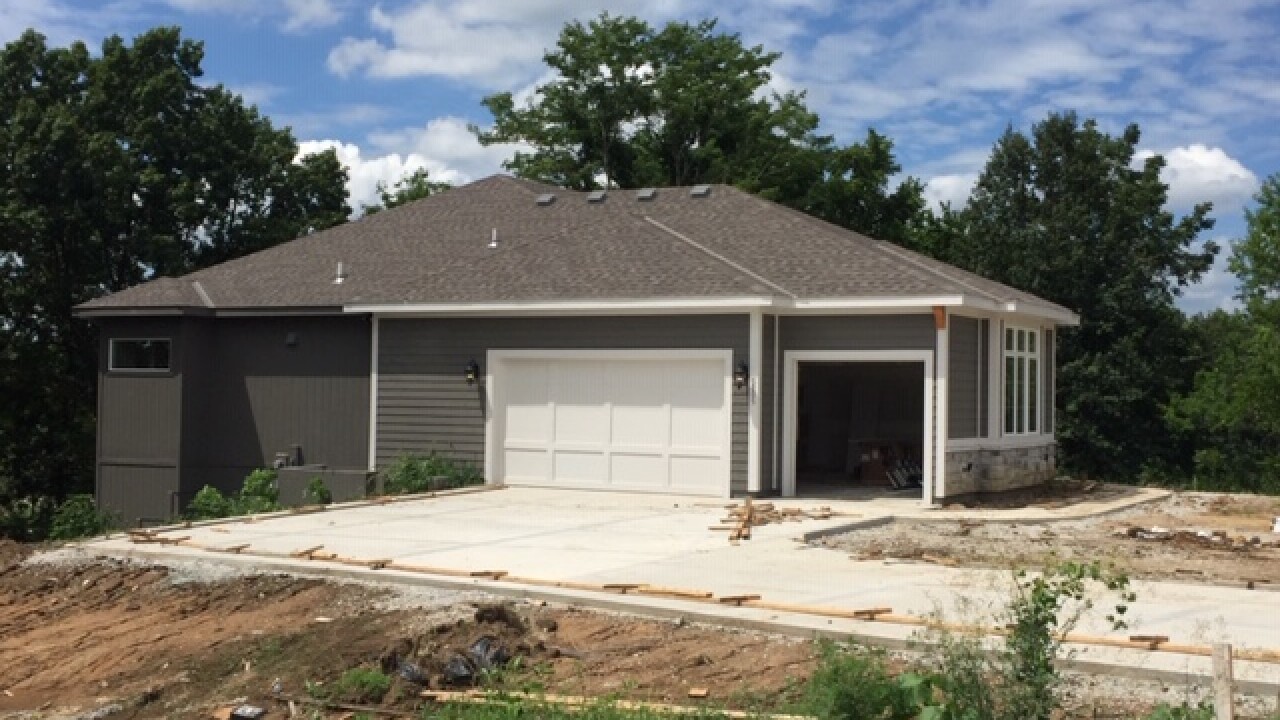 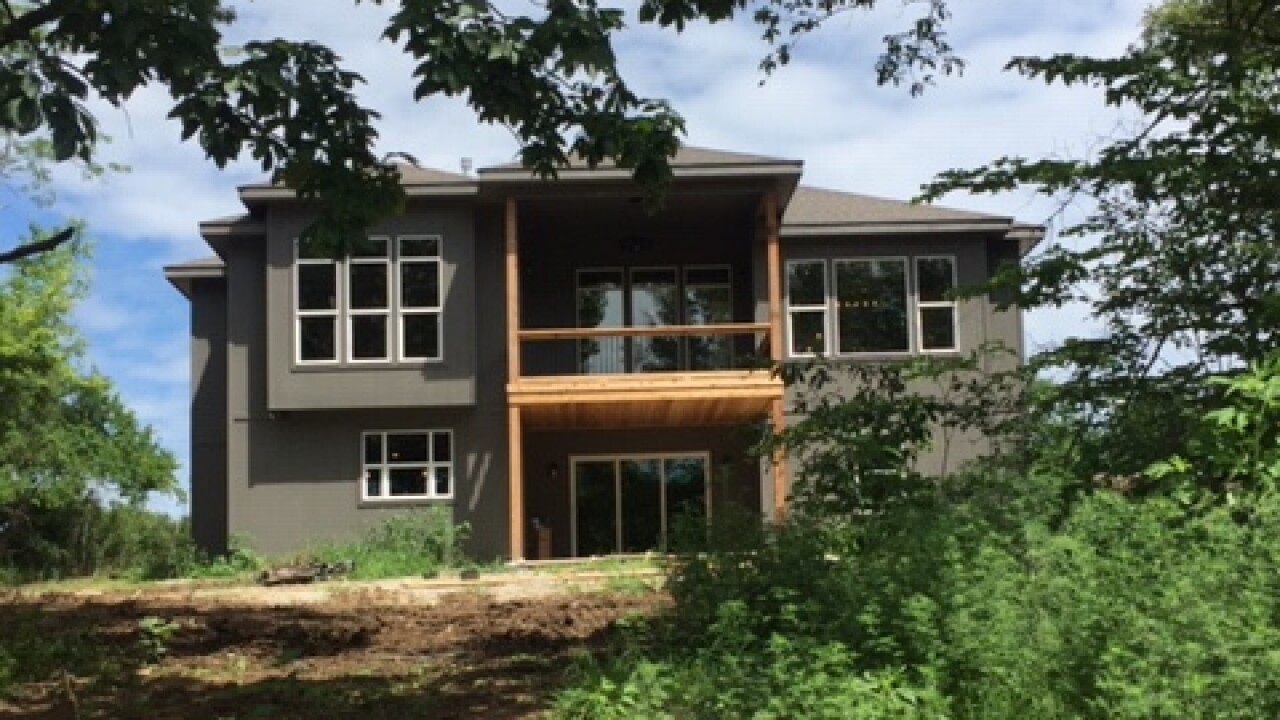 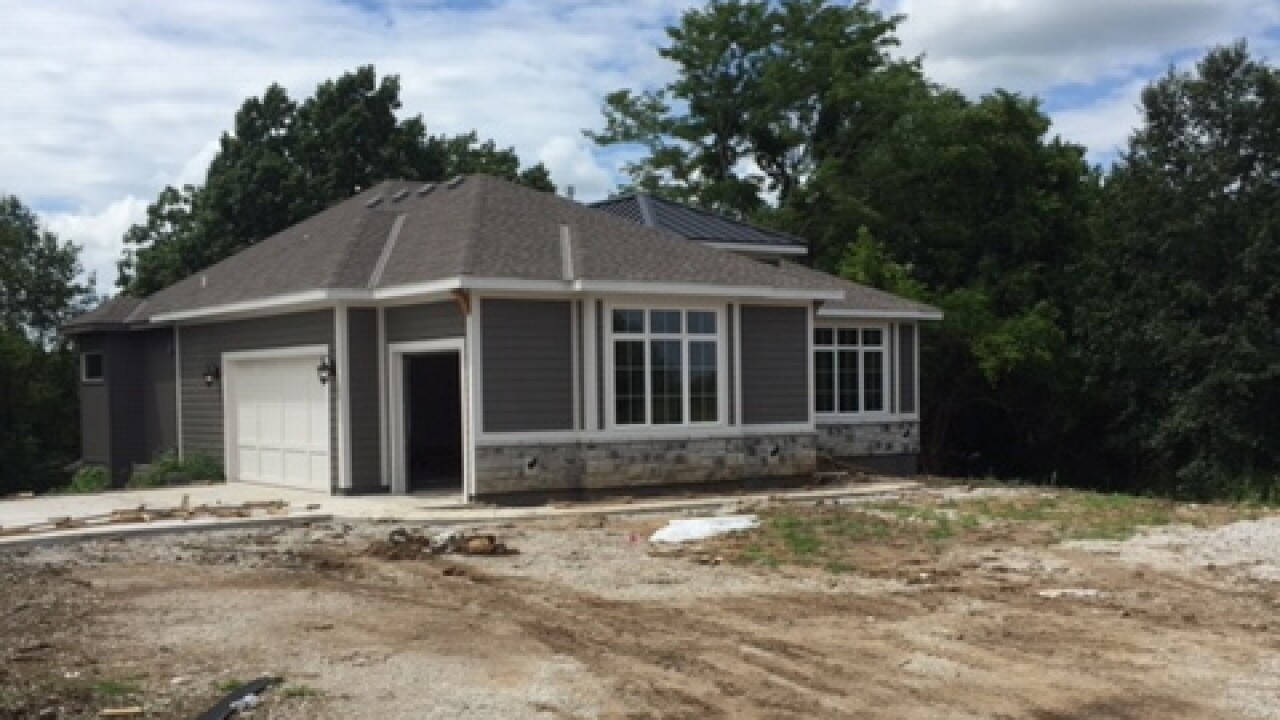 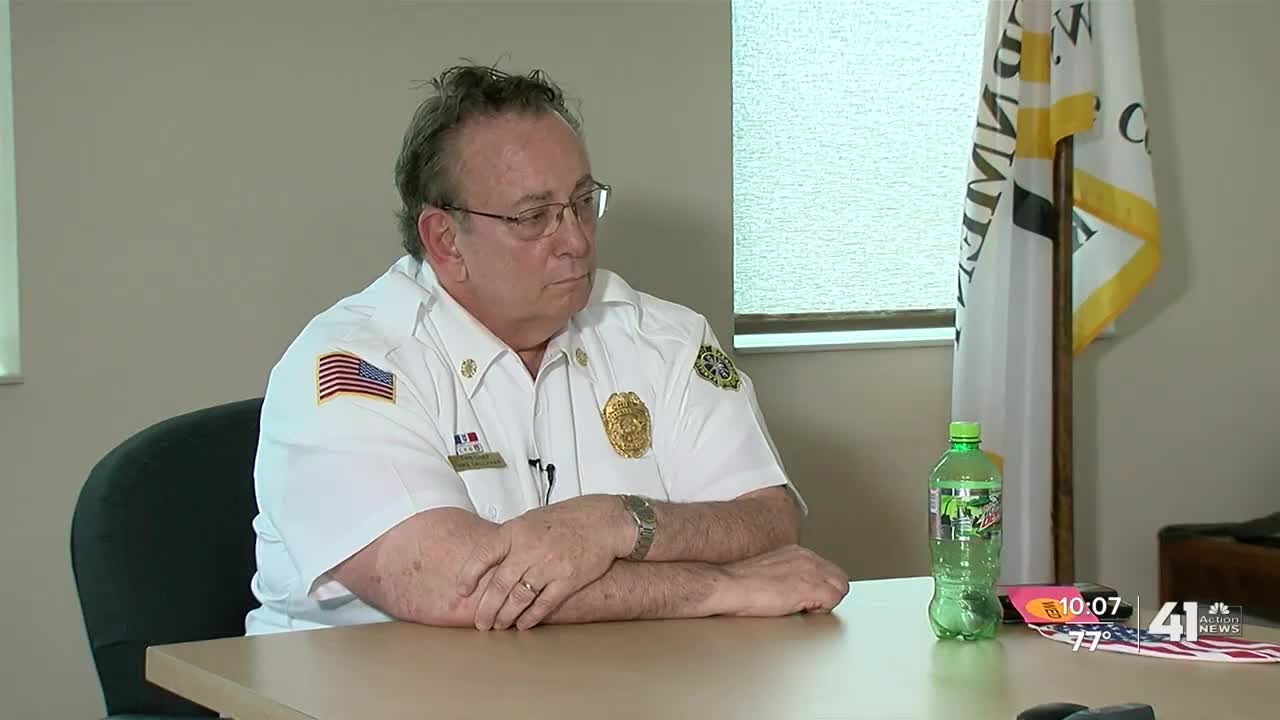 KANSAS CITY, Kan. — There’s a call for the Kansas City, Kansas, fire chief to resign or be fired.

That demand is coming from some of his own employees – members of the firefighters’ union.

At issue is where Chief Mike Callahan had been living for more than a year.

"We looked around to rent a house with a yard and we were unable to find an adequate yard here," Callahan said. "So I requested permission to look outside of the county."

Callahan said he first moved into a home in Prairie Village in July 2019.

He moved into a new home he built in a subdivision west of the Piper area of Wyandotte County on Monday.

When Callahan first took the chief’s job in 2018, he immediately moved into an apartment complex in KCK at North 110th Street and Parallel Parkway.

But Callahan said because his wife has a medical condition and can’t walk the couple’s two dogs long distances, he needed a suitable backyard.

When the I-Team asked Callahan if there was any property in Wyandotte County he could rent while his home was being built, he said, “There was nothing with sufficient size for the dogs, our two dogs to run.”

“'There’s not a place right now that’s suitable for me to live.' People ought to look pretty dimly at that," Wing said. "I do."

According to the real estate website Zillow.com, the home Callahan lived in for the last 13 months rented at $2,400 a month – meaning Callahan spent more than $30,000 to live there.

Public records show Callahan is the fifth highest paid employee of the Unified Government at a salary of more than $153,000 a year.

“For $2,400, he could've found a farm," Wyandotte County Commissioner Mike Kane said. "I mean, that is ridiculous to use a dog as a reason to move out of Wyandotte County."

The I-Team reached out to all Wyandotte County Commissioners for comment on Callahan’s 13-month residency in Prairie Village. Only Kane responded.

Unified Government Administrator Doug Bach said the "big thing" he looks at in situations like Callahan's is the "long-term game," referring to the new home Callahan built and moved into on Monday.

Unified Government rules don’t allow employees to live outside Wyandotte County after establishing residence there unless the county administrator gives them an exemption.

The I-Team first asked for county records regarding Callahan’s exemption on May 28. The Unified Government didn’t fulfill that request until July 2 and charged $120.12 to do it.

The subsequent request to interview both Bach and Callahan wasn’t granted until July 29.

Bach responded a few days later July 1, 2019, “authorizing your request to live outside of Wyandotte County”.

Then on June 10 of this year, Callahan asked Bach for an extension until Aug. 10 to move into his new home due to “supply delays resulting from COVID-19 shutdowns.”

While Callahan answers to Bach, Bach answers to the Wyandotte County Board of Commissioners.

When the I-Team asked Bach if he went to the commissioners to inform them of Callhan’s living exemption, Bach said, “Yes, I informed them.”

However, Kane said the board was not notified.

Kane also said if Bach had come to commissioners for input, Kane would’ve said no to Callahan’s request to live in Prairie Village.

"Grass is green, just as green over here as it is over in Johnson County," Kane said. "Why would you take a job here in Wyandotte County, move to Wyandotte County and move out because your dog needs a big backyard? We don't have big backyards here in Kansas City, Kansas?"

And Kane also said it’s not the first time he’s been unpleasantly surprised by a Bach decision without council input.

One example Kane noted is the lease deal Bach had with former KCK Police Chief Terry Zeigler to live in a county owned lake house.

“It’s obvious that he thinks we work for him and, in reality, he works for us,” Kane said of Bach.

When the I-Team asked Kane if he has confidence in Bach’s leadership, he said, “I do not."

Bach said he has granted similar living exemptions to firefighters and other Unified Government employees when they ask, typically due to hardship or while a new home – like Callahan’s house – is being built.

Firefighters Matthew Wardwell, Chad Adams and Kenneth Lee were all given residency exemptions to build new homes, according to those records. Wardwell and Adams, like Callahan, were both given extensions.

"I don't believe I've denied one exemption request in my six years as the manager," Bach said.

But former KCK Assistant Fire Chief Billy Jones said he was given a "hard no."

"I was surprised," Jones said, "but I played by the rules."

In 2016, Jones said he asked if he could stay on a few more months before retiring after moving to Shawnee so his wife could be closer to her new job.

Jones had lived his whole life in Wyandotte County up until that point and had worked for the KCK Fire Department 34 years.

Jones said Bach wouldn’t even see him to entertain the question.

Instead, Bach’s assistant Joe Connor, told him no after speaking to Bach.

Jones also said Connor told him it wouldn’t look good because his brother was the fire chief at that time.

Connor, who now works for Johnson County government, said Bach denied Jones’ request because it was a permanent move.

"It wasn't the way I wanted to go out," Jones said.

When asked about Jones, Bach said he couldn't remember the situation.

Wing, of the firefighters' union, also pointed to an internal fire department roster with employee names, addresses and phone numbers put out each year. The union supplied 2019 and 2020 rosters to the I-Team.

The 2020 roster has no listing for Callahan.

“My 5-year-old grandson could’ve figured out there’s something wrong with that,” Wing said.

When the I-Team asked Callahan if he could explain the discrepancy between the 2019 and 2020 rosters, he said, “I cannot. I don’t know what that list is. I don’t know where it was generated. No, I can’t.”

The I-Team also asked Callahan if it was common knowledge in the department he was living in Prairie Village.

“It was common knowledge I was building a house in Wyandotte County that I couldn't possibly live in until such time it was completed," Callahan said.

Both Wing and Kane said they have never heard of a Unified Government employee who had already moved into Wyandotte County being allowed to move out.

County rules give new employees up to one year to move into Wyandotte County, but don't allow employees to move out without permission from the county administrator.

Wing also said over the course of 30 years, he discovered 15 to 20 cases of firefighters living outside Wyandotte County.

When he brought those cases to the county administrator, Wing said the firefighters’ employment was terminated in every instance.

Wing believes the same standard should apply to Callahan.

Callahan said Wing is "entitled to his opinion," but that he himself is not going to resign.

During his roughly two-year tenure, Callahan said, he’s personally signed two applications for firefighters to live outside Wyandotte County due to personal circumstances.

However, if it’s done without his permission, Bach said those employees are fired.