Each of the 117 poppies in the reflection pool at the WWI Museum and Memorial symbolizes 1,000 service men and women who died in the Great War.

KANSAS CITY, Mo. — One hundred and seventeen poppies now fill the reflection pool at the World World I Museum and Memorial. Each one symbolizes 1,000 service men and women who died in the Great War.

Poppies were the first flowers to grow around soldiers’ graves in Belgium.

“Each one is hand folded; the steel is bent. My husband and I bent each one, so each one is individual, just like a real poppy," said Ada Koch, the creator of the art installation titled, "Relations of Hope: Armistice 1918.” 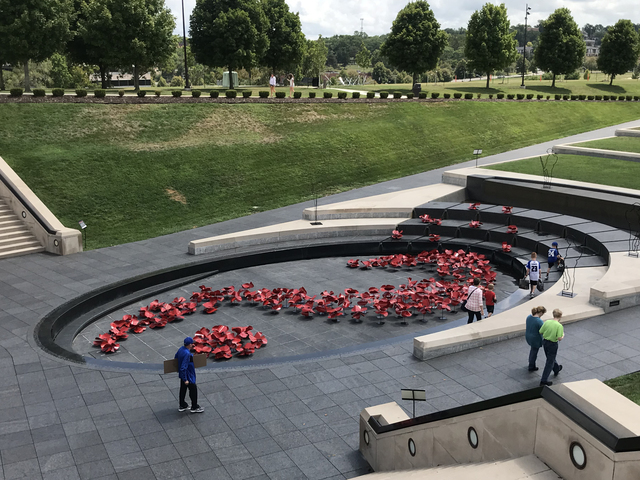 Koch said she was inspired by the museum.

"This museum has a great motto of remembering those who sacrificed for this country, but also learning from that, what happened in the Great War, and I'm all about that," said Koch.

This year will mark 100 years since the agreement to stop fighting in World War I.

It took hours to bring each poppy in and put them in their correct spots.

The exhibit is already drawing a crowd.

All to honor those who passed.

"I think it’s just a happy, joyful, meaningful and even poetic installation here at the World War I Museum," said Dawn Taylor, a volunteer who helped set up the art installation.

The Armistice poppies will be on display until November 11. They will be available to purchase through the museum at give@theworldwar.org