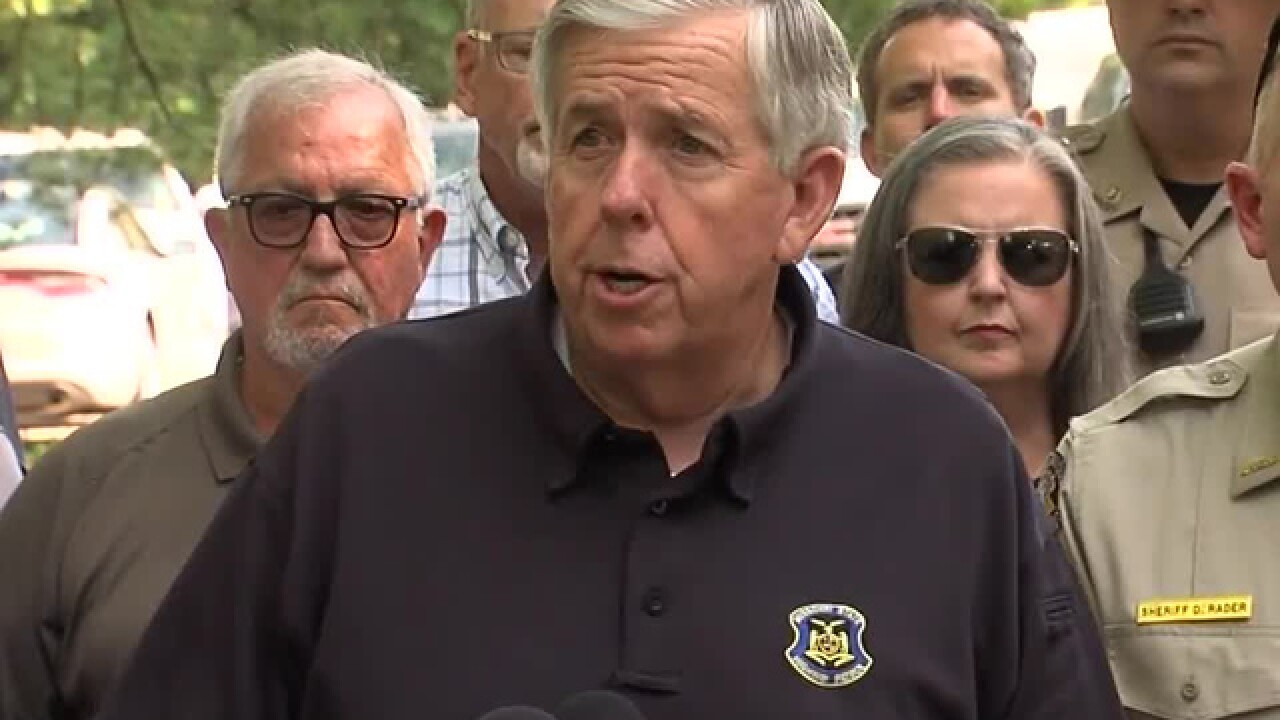 Copyright 2018 Scripps Media, Inc. All rights reserved. This material may not be published, broadcast, rewritten, or redistributed.
<p>Gov. Mike Parson spoke at a news conference on a tragedy at Table Rock Lake where a "Duck" boat capsized, leaving 13 people dead and four missing.</p> 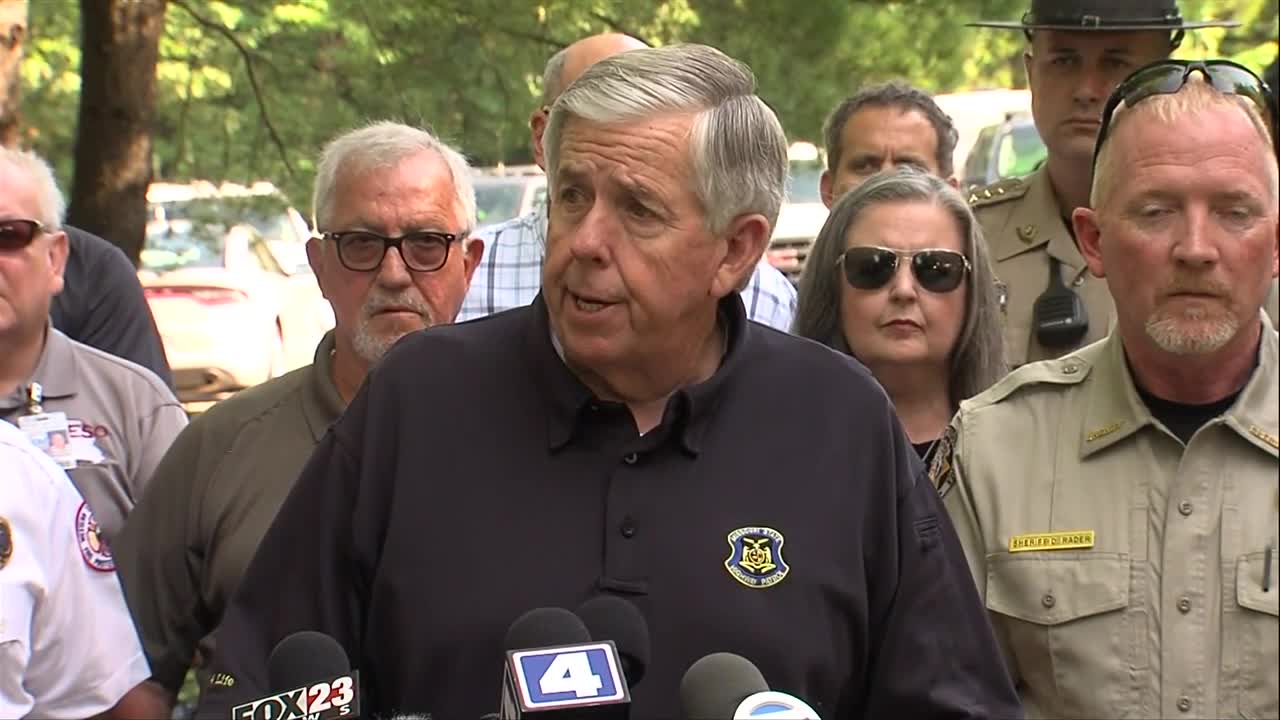 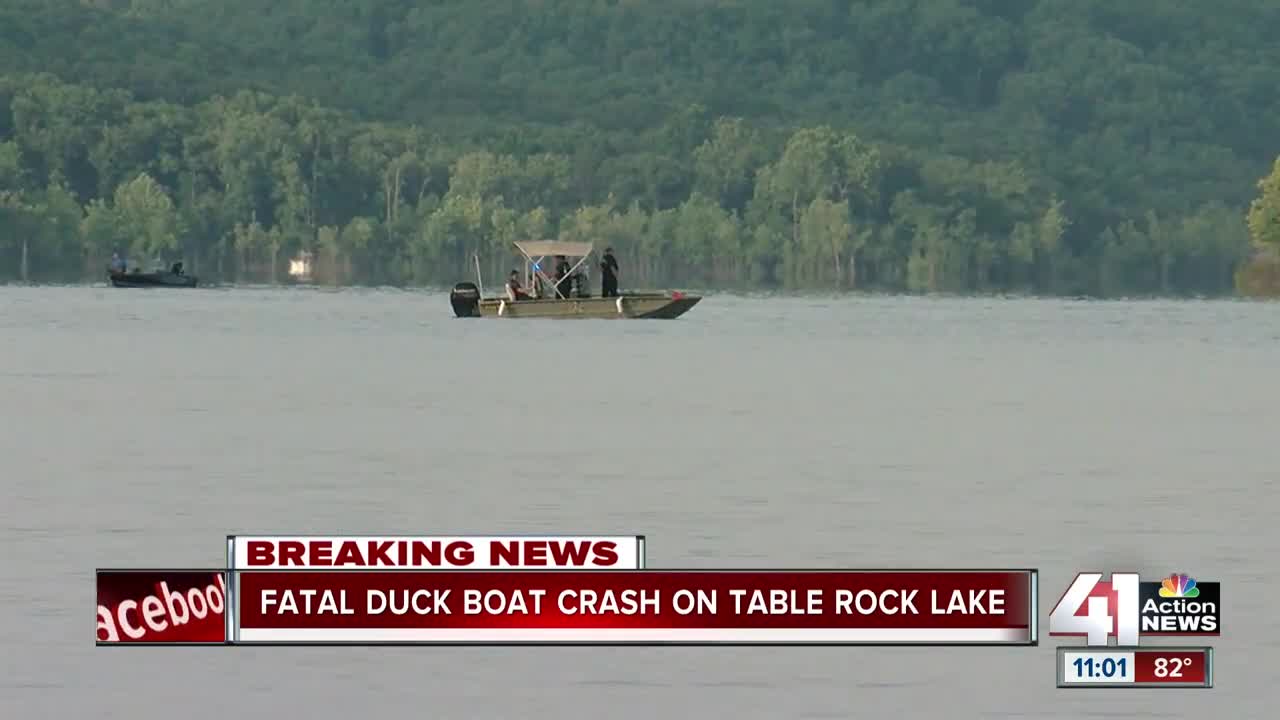 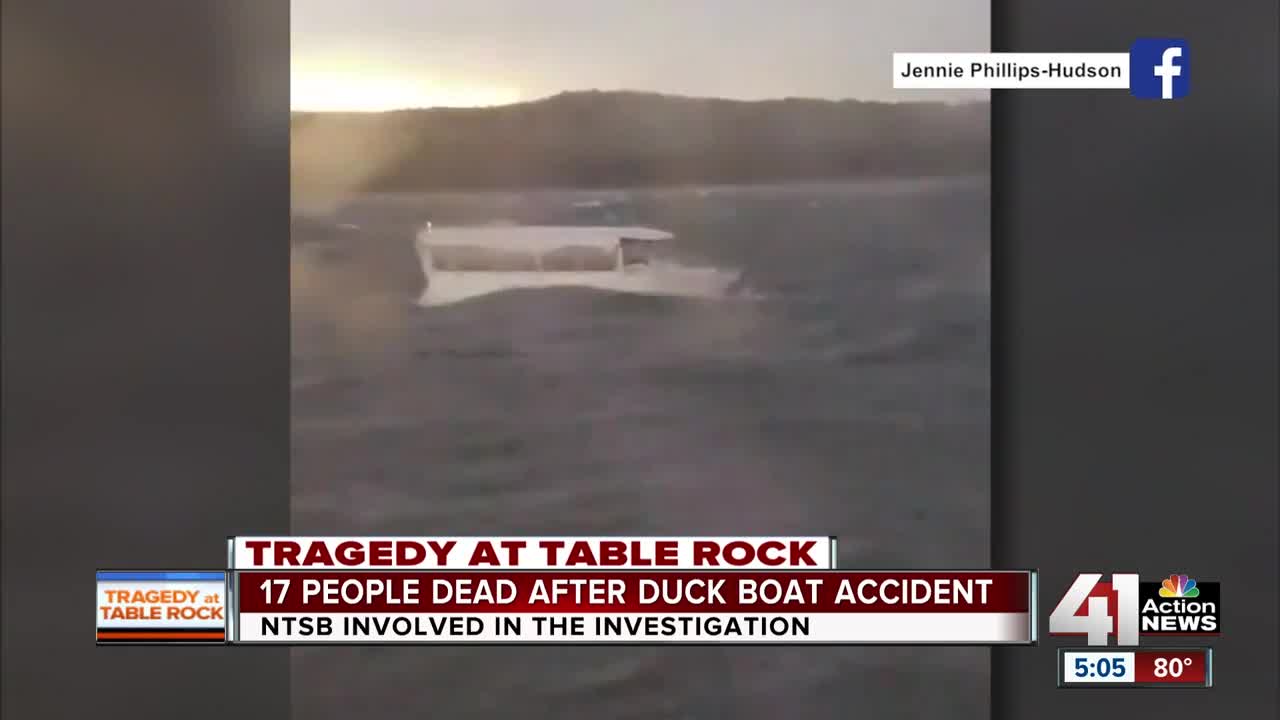 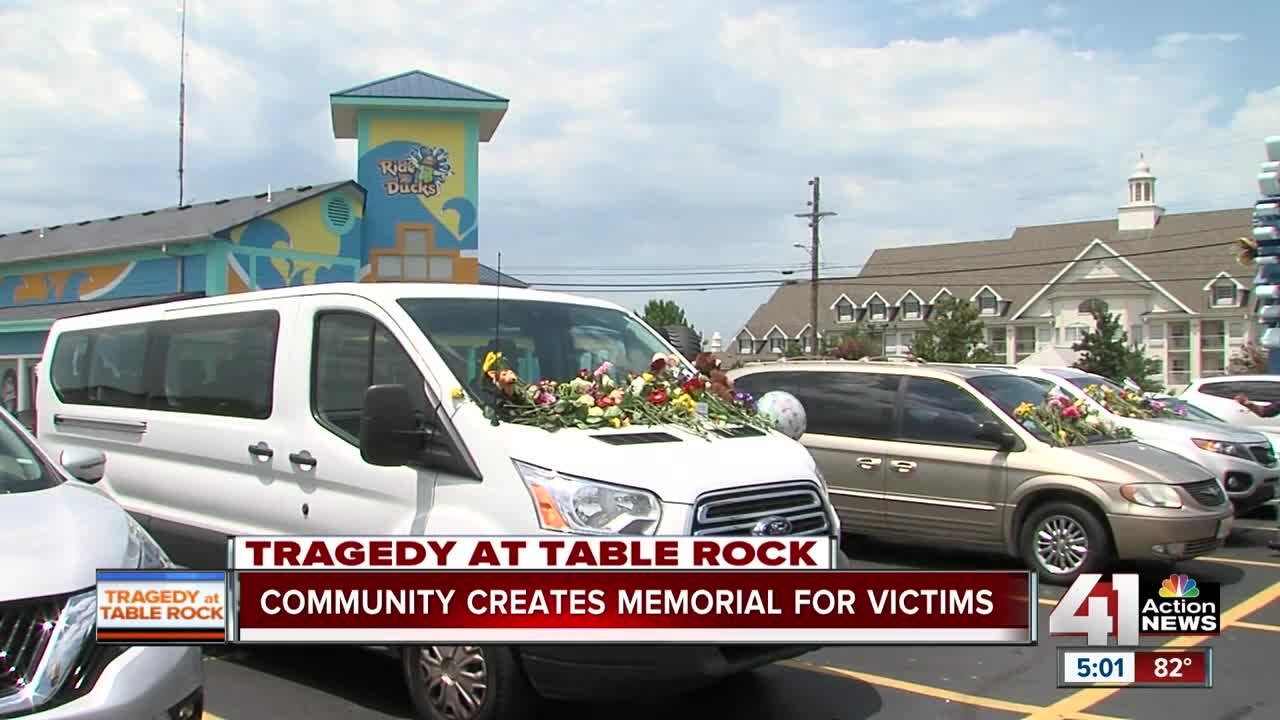 KANSAS CITY, Mo. — Officials say the investigation into a duck boat that capsized, killing 17 people, could take up to year.

That raises the death toll to 17 people who were aboard a Ride the Ducks boat, which sank as a thunderstorm created dangerous conditions with high waves on the lake and the boat was caught out in the open.

Witness video obtained by 41 Action News shows the tension on another duck boat as it made its way back to land during the storm. It and all of its occupants made it back safely.

Later in the afternoon Gov. Parson said he spoke to an aunt and 13-year-old boy who lost nine members of their family in the tragedy.

Indianapolis sister station WRTV reports that at least some of the victims of the tragedy were from Indianapolis, though it wasn't immediately clear if the it was the same family as the family that lost nine family members.

WATCH: The press conference and continuing coverage in the video player above.

Missouri State Highway Patrol divers have located the boat , which is believed to be under 80 feet of water.

Rader showed reporters the area where the boat sank.

First look: Duck boat sank near the red part of the Branson Belle. Was trying to get to dock seen at end of the video. @41actionnews pic.twitter.com/CwxqUfA5dy

The vessel sank in 40 feet of water, but rolled into deeper water and is on its wheels at the bottom of the lake, according to Rader. The boat will remain underwater until Monday pending investigation.

Details about what caused the accident were scant, prompting Rader and Missouri Gov. Mike Parson, who attended a Friday morning press conference, to plead for patience.

The investigation by Stone County deputies and the Missouri State Highway Patrol continues, but the Coast Guard and National Transportation Safety Board — entities assisting with the investigation — will determine what caused the incident.

Occupational Safety and Health Administration compliance officers also are at the scene conducting an investigation.

According to OSHA Spokesman Scott Allen, the company "Ride the Ducks International LLC" has no past history of safety violations.

“There’s a lot of healing that has to take place right now …,” Parson said. “I know everybody wants answers, but the priority right now is to protect the families, unite the families and deal with the situations they’re in.”

There were 17 people, ranging in age from 1 to 70 years old, confirmed dead late Friday morning. The four people who had still been missing and presumed dead were recovered by mid-morning.

Seven people aboard the boat, which had 29 passengers and two crew members when it went down, were injured and seven others were rescued without injury.

The captain of the capsized boat survived, according to Rader, but his identity and the identities of the passengers who died have not been released.

After the morning press conference, Branson Mayor Karen Best confirmed to 41 Action News that Ride the Ducks Captain Robert Williams , a driver with the lake-tour company, was among the 17 people who died.

As the boat went under, a Stone County deputy who was aboard the nearby Showboat Branson Belle, land-based workers for the lake-tour company and passengers who were waiting to board the boat’s next excursion went into the water to attempt and assist in the rescue.

There were life jackets in the boat, but it’s unclear how many, if any, passengers were wearing a floatation device, Rader said.

“I think it’s going to take some time to answers those questions,” Parson said, urging patience with the investigation to avoid speculation and promised to release a full report in the future.

Parson said he hasn’t spoken to President Trump, but said his staff has been in contact with White House staff.

Trump has been briefed about the situation and posted the following statement Friday afternoon:

President Donald J. Trump and First Lady Melania Trump extend their deepest sympathies to all those affected by yesterday’s boating accident on Table Rock Lake near Branson, Missouri.  Tragically, a tourism boat sank during a storm while out on the lake, killing 17 people and injuring several others.  Our prayers are with the victims and their loved ones.  We are thankful for the brave first responders and dive crews, whose quick and decisive actions have saved many lives, and we continue to pray for their safety as their search, rescue, and recovery operations continue.  Since the incident occurred, the Administration has been in contact with Governor Parson and other State and local officials, and the President will continue to monitor and receive regular updates on the situation.

Sen. Claire McCaskill arrived in Branson by late Friday afternoon and planned to meet with Coast Guard and NTSB officials.

In Branson now. Heading to a brief from the Coast Guard and NTSB. #DuckBoatTragedy