Troopers frustrated by continued low seat belt use in Missouri 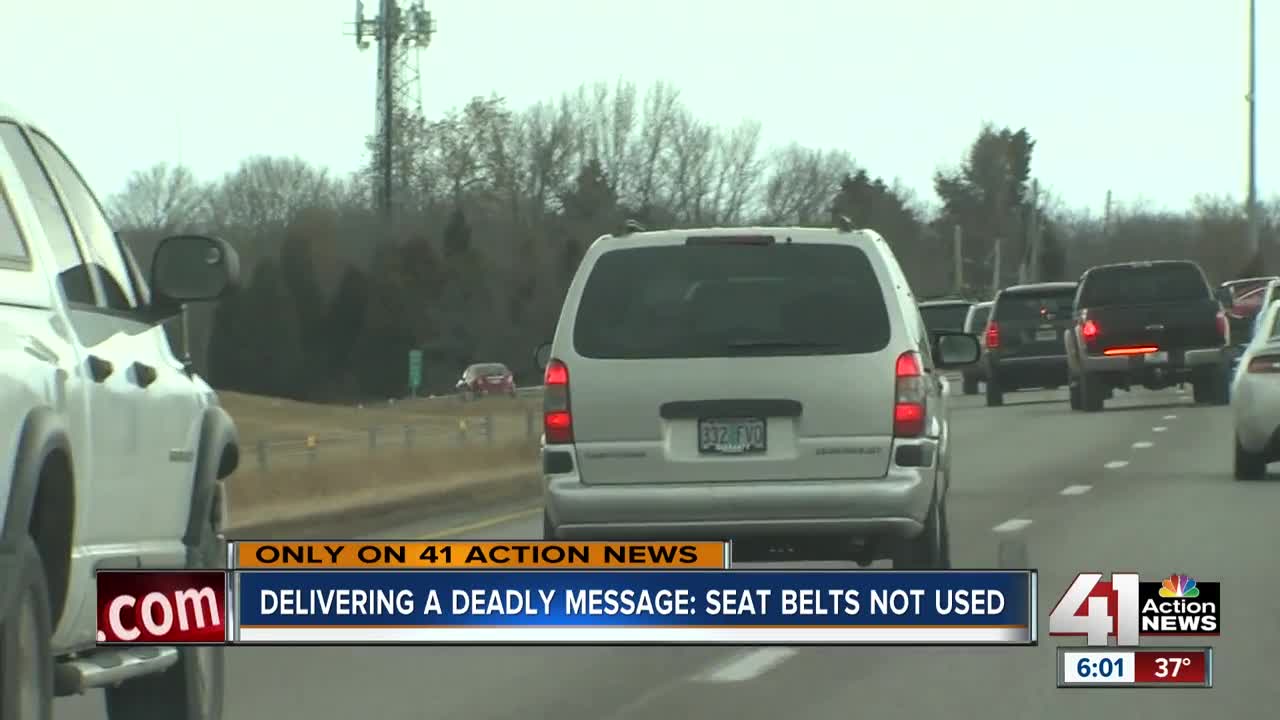 LEE'S SUMMIT, Mo. — It's something that takes just a few seconds and could save your life, but the Missouri Highway Patrol continues to find drivers and passengers failing to buckle up.

"The frustrating part is some of the people that need to hear the message aren't hearing it," Missouri Highway Patrol Sgt. Collin Stosberg said.

During the past decade in Missouri, between 60 and 70 percent of people killed in crashes each year were not wearing seat belts, according to Stosberg.

Missouri is one of only 15 states with a secondary seat belt law for those driving or riding in the front seat. That means troopers can't stop and ticket drivers unless they're also breaking another law. The cost of not complying is just $10.

But as Stosberg knows far too well, there are far more serious consequences if you get in a crash.

"When it comes to fatalities and injury crashes, just by wearing your seatbelt, you increase your chance of surviving by up to 50 percent," he said.

Families on both sides of the state line learned the tragic lesson in the past week.

On Sunday, a woman had two children in the backseat when her car ran off the road on Hidden Lake Drive in the Northland. She was not wearing a seat belt and died at the scene.

Last Thursday, an SUV carrying four teens hit a dump truck in KCK. Police said none of the teenagers were wearing seat belts, and 14-year-old Angelo DePeralta was killed.

"Put your seatbelt on wherever you go. That's the main thing....this probably would have helped him, would have saved him," DePeralta's heartbroken mother, Lorena Gonzales, told 41 Action News.

Despite the consequences, in 2017, only 84 percent of Missourians buckled up. The number for Kansas dropped to 82 percent, compared to the national average of 89.7.

So why aren't drivers and passengers buckling up?

"The crashes we've worked recently that involve seat belt usage or lack thereof, categorically, most of those crashes are close to their home. So I think that's a big factor," Stosberg said.

Drivers may feel more comfortable on familiar routes, making them less inclined to use a seat belt.

Although Missouri's usage percentage is climbing, Stosberg still thinks of the more than 900 people killed in crashes in the state last year, especially the ones who weren't buckled up.

41 Action News reached out to the Missouri Department of Transportation to see if the agency will push for stronger seat belt laws in the coming legislative session. A spokeswoman said MoDOT would support any legislation proposed, but they're not actively seeking sponsors.

Kansas City, Missouri has its own primary ordinance that allows police to pull people over solely for not buckling up.