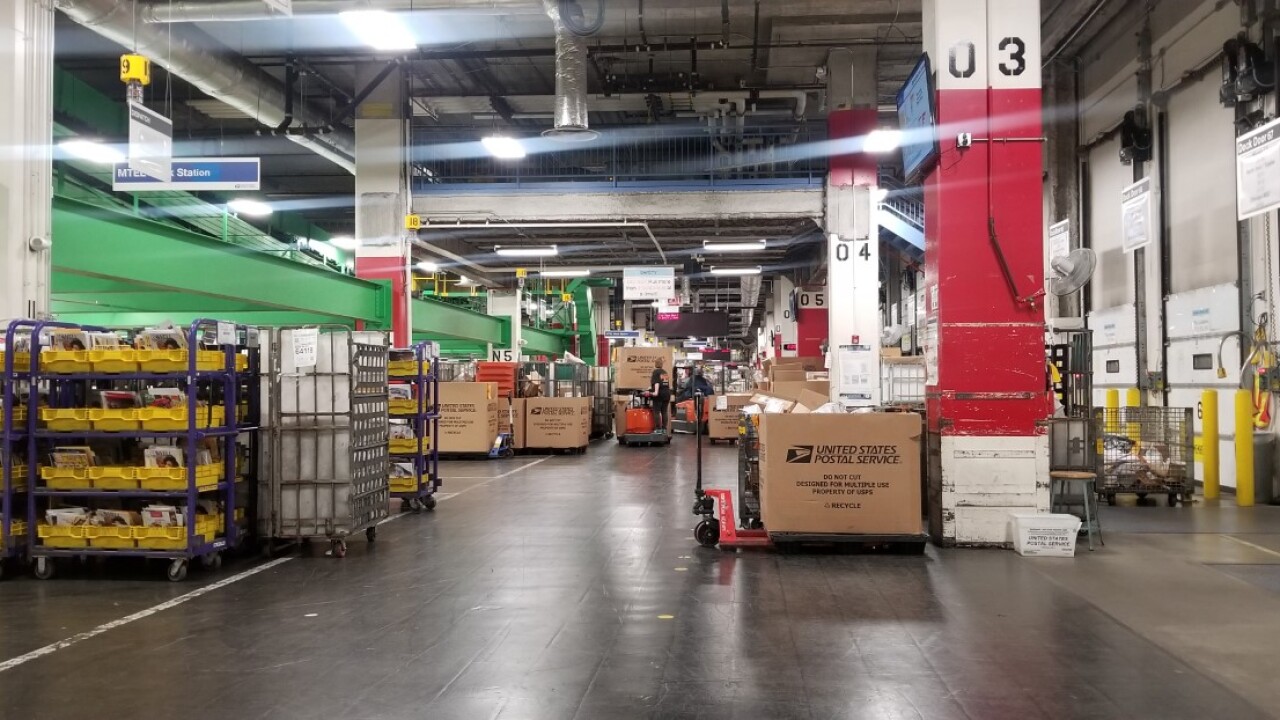 KANSAS CITY, Mo. — An official at the United States Postal Service confirmed Friday that four mail-processing machines have been removed at its Kansas City, Missouri, facility.

The removal of machines comes as part of changes made by Postmaster General Louis DeJoy, according to a report from CNN.

The USPS official said that in addition to the four machines removed in Kansas City, the USPS had removed two machines in Springfield and one in Wichita "for efficiency and lower mail volume."

The official said that mail volume is usually lower in the summer, but that package volume has gone up during the pandemic and overall volume typically increases in the fall.

"We are seeing the destruction of the postal service," U.S. Rep Emanuel Cleaver II, a Missouri Democrat who represents KCMO, said. "I don’t think there are any questions about it."

A USPS spokesman said in a statement to 41 Action News that moving equipment is routine and the infrastructure maneuvers "will ensure more efficient, cost effective operations and better service for our customers."

The Postal Service routinely moves equipment around its network as necessary to match changing mail and package volumes. Package volume is up, but mail volume continues to decline. Adapting our processing infrastructure to the current volumes will ensure more efficient, cost effective operations and better service for our customers.

Additionally, we are retiring older, out of date equipment so that we can expand our newer sorting equipment that can handle as many as 30,000 letters an hour. This will increase our capacity and our efficiency to handle increased package volume as well any current letter and flat volume. This is a multi-year effort that prepares us for the future.

The St. Louis Post Dispatch reported Friday that Missouri Secretary of State Jay Ashcroft was notified in late July that the USPS may not be able to return all mail-in ballots to election authorities by the Nov. 3 election.

That delay could invalidate some ballots for the general election, when the country will elect a president and Missouri will elect a governor, among other races.

The letter to Ashcroft came from USPS official Thomas Marshall, who warned Missourians to mail their ballots at least a week before the election to ensure they would be counted.

"We are 80 days out until the next election," Cleaver said. "I don’t think there’s any question that this is all related to the upcoming election. People in our community right now ought to begin writing letters and screaming and saying this is a misplaced political move."

The Trump administration has assailed mail-in balloting efforts across the country amid the COVID-19 pandemic, including a lawsuit to stop expansion efforts in Nevada and threats to withhold funding to Michigan among other strong-arm tactics.

Despite his rhetoric and unsubstantiated claims that mail-in ballots lead to voter fraud, Trump and his wife, Melania, requested mail-in ballots for next week's Florida primary, according to USA Today.

Johnson County saw record demand for mail-in ballots ahead of the Aug. 4 primary in Kansas.

Trump admitted Thursday that he opposes the inclusion of aid for USPS in any new coronavirus relief package, because he wants to suppress mail-in voting.

Early during the pandemic, the administration called for USPS to raise its rates for shipping packages in denying federal assistance. Congress does not currently provide any funding for the postal service.

It also has sought to bring the USPS, which is a self-funded and independent agency of the federal executive branch founded in 1775, under the Department of the Treasury, which many view as a possible step toward privatization. Trump has been angling to privatize the postal service for more than two years.

"No private entity is going to drive way out in the country to deliver one piece of mail to Ms. Lewis," Cleaver said. "If it is not stopped, I can guarantee you it’s going to continue to go, go, go until there is no postal service left."