'We will not apologize': Trump DHS chief defends immigration policy 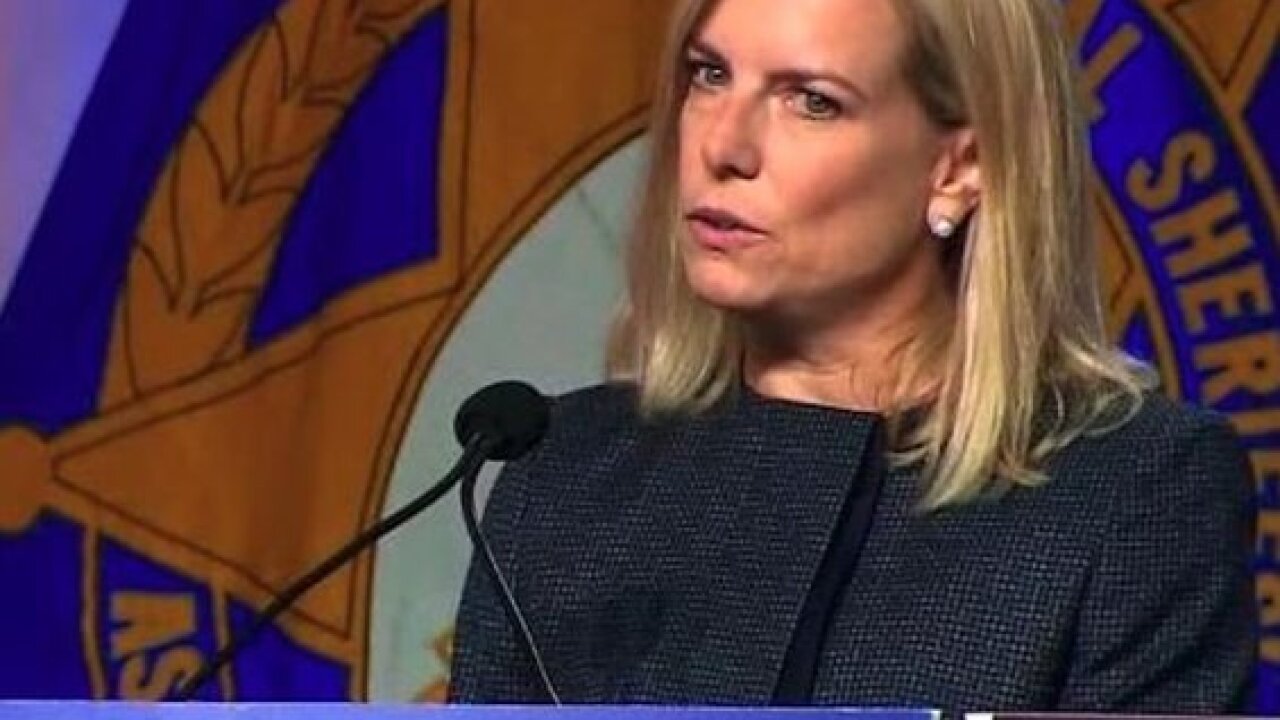 © 2018 Cable News Network, Inc.
CNN
<p>Department of Homeland Security Secretary Kirstjen Nielsen hit back at criticism of the Trump administration's practice of separating families at the border, saying DHS will not watch the media "attack law enforcement for enforcing the laws passed by Congress."</p>

"We will not apologize for the job we do or for the job law enforcement does for doing the job that the American people expect us to do," she said, speaking in front of a friendly audience of the National Sheriffs' Association about the administration's policies resulting in family separations. "Illegal actions have and must have consequences. No more free passes, no more get out of jail free cards."

She claimed "misinformation" was being spread about the policy, which is that all people caught crossing the border illegally are prosecuted and thus families are separated.

Critics have lambasted the policy calling it cruel, inhumane to unnecessary. Outcry has come from Democratic and Republican lawmakers as well as the United Nations and religious leaders. Many have said the idea of separating children from their parents defies American and human values, as well as not needed when there are pilot programs that have shown that families with the right release conditions do show up for their court proceedings in the vast majority of cases.

Nielsen noted that it is common in all criminal matters that children do not go to jail with their parents, without noting that in most cases, those parents do not return from jail to find their kids transferred to the custody of another government agency and have to figure out how to get those kids back.

President Donald Trump, meanwhile, has been squarely placing blame on his administration's policy on Democrats.

"It is the Democrats fault for being weak and ineffective with Boarder Security and Crime. Tell them to start thinking about the people devastated by Crime coming from illegal immigration. Change the laws!" he tweeted Monday.

Though she was not as explicit as the President in characterizing the policy as a negotiating tactic, Nielsen clearly linked the effort with the demands the administration has made on Congress, which include passing laws that even some Republicans don't support.

"We are enforcing the laws passed by Congress, and we are doing all that we can in the executive branch to protect our communities. It is now time that Congress act to fix our broken immigration system," Nielsen said. "Surely it is the beginning of the unraveling of democracy when the body who makes the laws, rather than changing them, asks the body who enforces the laws not to enforce the laws. That cannot be the answer."

Nielsen called a 2015 court settlement -- dating back to a court ruling in 1997 that requires children not be detained longer than 20 days -- a "historic get out of jail free practice of the past administration."

No previous administration has interpreted this as requiring the separation of parents from their children, instead releasing families with court dates for immigration proceedings and various monitoring tactics.

And once again, she told asylum seekers to show up at a legal port of entry. CNN is looking into reports that these individuals are being turned away there, as well.

"If you are seeking asylum, go to a port of entry," Nielsen said.

After that, Nielsen once again walked through the administration's wishlist for changing immigration laws -- including targeting sanctuary city policies, changing the threshold for qualifying for asylum to be much higher, and reversing many protections for children allowing them to be detained for longer or deported immediately.

Nielsen also addressed some of her remarks directly at lawmakers as they are expected to vote on immigration legislation in the House this week. She framed the issue as anyone who votes against their preferred policy is voting against the "rule of law."

"My message to members is clear: You have a chance. If you want to secure our borders, if you want to keep gangs such as MS-13 out of our communities, if you want to address ... if you want to restore the rule of law, you must close the legal loopholes," Nielsen said, referring to the pieces of law that the administration wants to change.

"However, if you want to support a broken immigration system that harms the interest of Americans and our security, that rewards those who thumb their noses at our laws ... then don't vote to fix the problem. It's a simple choice," she said.

Nielsen said "those who have complained" about the policies now have an "opportunity" to work with the administration on the issue.

"As (GOP Rep. Steve Scalise) said, it is an issue that every one of the last four administration has faced. It is time to fix it," Nielsen said.