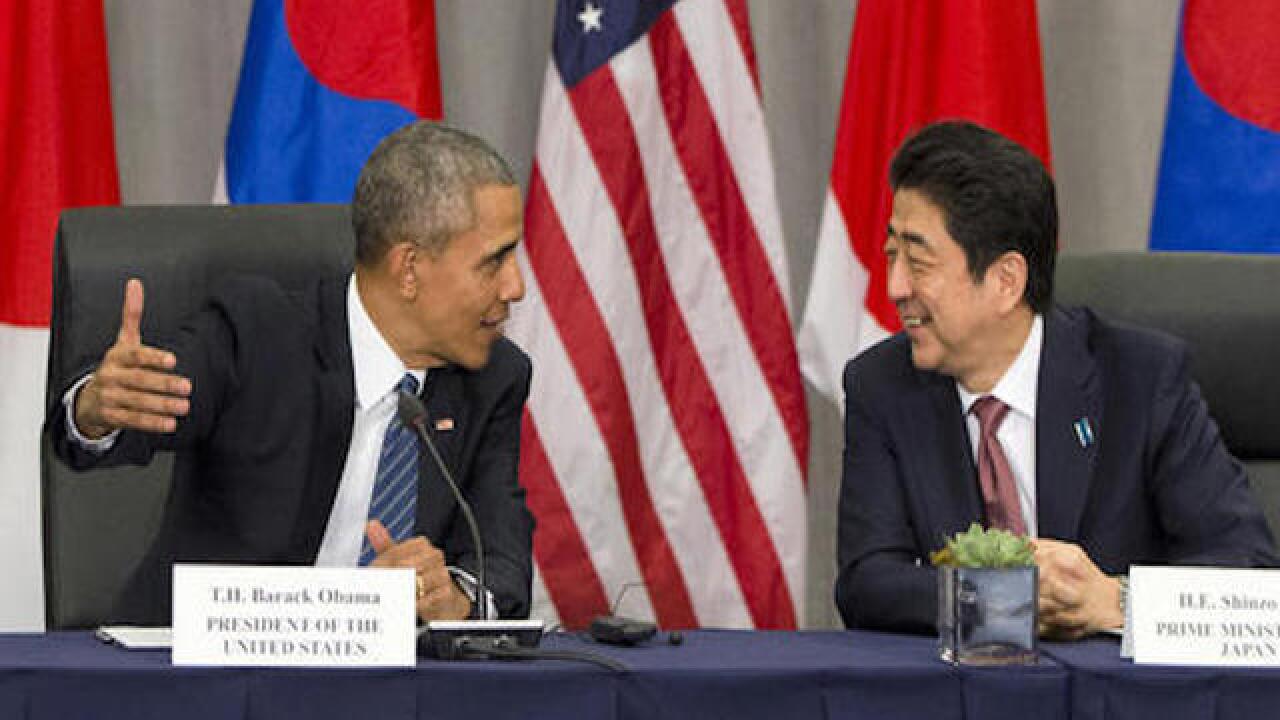 Copyright Associated Press
Jacquelyn Martin
<p>FILE - In this March 31, 2016, file photo, U.S. President Barack Obama speaks with Japanese Prime Minister Shinzo Abe during their meeting at the Nuclear Security Summit in Washington. Obama will travel to Hiroshima in May 2016 in the first visit by a sitting American president to the site where the U.S. dropped an atomic bomb. The White House says Obama will visit along with Abe during a previously scheduled visit to Japan. (AP Photo/Jacquelyn Martin, File)</p>

SHIMA, Japan (AP) — President Barack Obama said Wednesday he plans to use his historic visit to Hiroshima with Japanese Prime Minister Shinzo Abe to reflect on the suffering of war and the need to take steps to prevent it. Abe said he had no plans to reciprocate Obama's gesture by paying his own visit to Pearl Harbor.

Obama's opened his trip to Japan with much intrigue about his upcoming stop in the city where the U.S. dropped the first atomic bomb. But that first-ever visit by a sitting American president was caught up in the controversy in Japan over the recent arrest of a former Marine in connection with the murder of a Japanese woman in Okinawa.

Abe ripped into Obama while demanding U.S. steps to prevent further incidents. Obama told Abe that the U.S. would support having the suspect prosecuted through Japan's legal system.

Obama's comments on Hiroshima after meeting with Abe offered a preview of the approach he will try to take at the site of the U.S. attack on Aug. 6, 1945, that killed 140,000 people.

The White House has ruled out an apology by the president for the atomic bombing, but the visit is being viewed by Japanese citizens as a conciliatory gesture.

"One of the things I hope to reflect on when I'm at Hiroshima and certainly something I reflected on when I was in Vietnam was just a reminder that war involves suffering," Obama said after arriving from Vietnam. "We should always do what we can to prevent it."

But he added: "It's important for us to act on occasion in order to make sure that the American people are protected."

Abe said he "wholeheartedly" welcomed Obama's decision, adding that he was convinced that the joint visit would create strong momentum toward global denuclearization.

At the same time, Abe said he had "no specific plans" to visit Pearl Harbor in Hawaii. Some have called for such a trip as a sign of Japan's acknowledgement of its wartime actions.

The surprise attack by the Japanese military on Dec. 7, 1941, killed more than 2,400 people, wounded scores and led the United States' entry into World War II.

Abe pointed to his previous stop at the World War II memorial in Washington at a speech to a joint session of U.S. Congress as acts intended to pay tribute to victims of the war on both sides.

Raw emotions over the U.S. military presence in Okinawa were on display on Obama's first day in Japan, stoked by the arrest of Kenneth Shinzato, 32, after the body of a 20-year-old woman was found at a location he provided in a forest in central Okinawa. The murder has triggered national outrage, potentially complicating the long-delayed relocation of Marine Air Station Futenma from one location on the island to another.

Acknowledging his own "profound resentment," Abe called it an "absolutely despicable crime" committed by a "self-centered" offender. He said he told Obama that the feelings of the Japanese people must be sincerely taken to heart.

"I am just speechless," Abe said through a translator.

Abe called on the American people to take rigorous and strict steps to prevent another incident in the future.

"I extended my sincerest condolences and deepest regrets," the president said. He said the U.S. would fully cooperate with Japan to allow the suspect to be prosecuted "under the Japanese legal system."

The incident has rekindled long-running opposition from many Okinawa residents who want the U.S. base off the island entirely. Abe suggested Japan would continue looking for ways to resolve issues that come up under the U.S.-Japan agreement that allows Washington to stage troops there. Still, he said the case had given Okinawa residents a "strong sense of uneasiness."

"My intention is to thoroughly implement measures to prevent crimes and ensure peace of mind among the people in Okinawa," Abe said.

Earlier Wednesday, Obama ended his stay in Vietnam by meeting with government leaders and addressing the Vietnamese people in a speech. In a show of how relations between the former wartime enemies had thawed, Obama announced the end of a five-decades-old U.S. ban on the sale of arms to Vietnam. He also announced that the Peace Corps would begin operating in the country for the first time.

In a town hall event, Obama praised the country's next generation of leaders for being more conscious of the environment and urged them to "do something about" climate change. He said Vietnam will be one of the countries most affected by the trend of warming temperatures and rising seas.