KANSAS CITY, Mo. — Kansas City has the fifth-highest murder rate in the nation based on figures for major U.S. cities in 2017, which was recently released by the FBI.

The nonprofit journalism website The Trace, which reports on gun violence in America, first analyzed the data and provided a comparative ranking.

It's important to remember there are real people behind the grim statistical findings.

Family and friends recently gathered for a vigil to pay tribute to Antonio Shanklin, a murder victim, and to share their grief.

"This person has took my child from me and I am hurting so bad," Shanklin's mother said.

Shanklin is one of more than 100 homicide victims in Kansas City already this year.

"We have a higher homicide rate than Chicago and this should be really concerning to everybody," Patrick Tuohey of the Show Me Institute said. 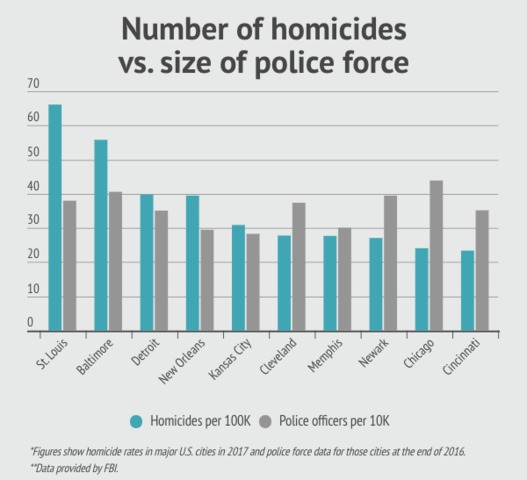 "What has an impact on violence in the city is the number of people that have guns in the city," he said. "And that's not something officers can fix and solve. It's something the state has to get involved in."

Tuohey disagreed with James' assessment. He acknowledged there are a lot of guns in Kansas City, but doesn't think that correlates with a spike in the murder rate.

Jackson County, Missouri, ranks 91st in the country with 31.5 percent of residents keeping firearms in their homes, according to the website city-data.com. Johnson County, Kansas, ranks 100th at 29.5 percent.

Of course, those figures may not account for illegal or stolen weapons.

The 41 Action News Investigators took part in a national report last year on stolen guns being used in crimes — not just in Kansas City, but across the country.

"It's not the prevalence of guns contributing to crime and I'm not aware that Kansas City has more guns on the street than it did 10 or 20 years ago," Tuohey said. "Those things haven't changed."

Instead, Tuohey blames the dwindling ranks of the Kansas City, Missouri, Police Department in recent years as a contributing factor.

"Seeing a reduction in the number of police officers really tells me that we are not equipped and not making a serious effort to address homicide," Tuohey said.

James was sworn in as Kansas City's mayor in May 2011. There were 1,386 sworn KCPD officers that year, according to KCPD Annual Reports.

That number peaked at 1,427 two years later before a steady decline on James' watch.

That represents more than a 10-percent loss in the number of KCPD sworn officers since 2013.

During James' tenure, the homicide numbers in the city have spiked at the same time the number of KCPD officers has declined. 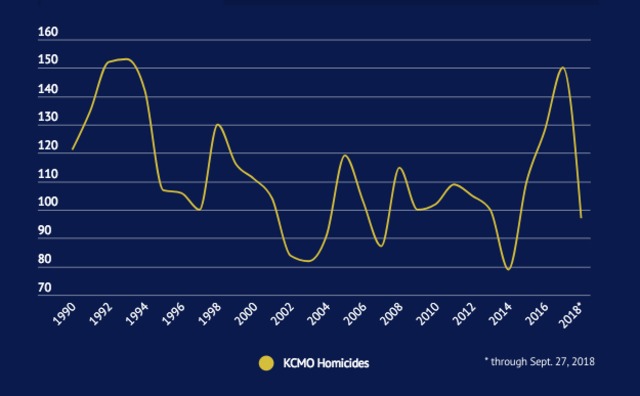 While the number of police officers has dropped in the last few years, so has the police budget as homicides have spiked during the same span.

A report by the 41 Action News Investigators also showed that the KCPD has never reached a 50-year-old manpower goal — 1,500 sworn officers — which was originally set after the 1968 race riots.

Tuohey believes Mayor James, as a Kansas City Police Board member and with veto power over the city budget, has an outsized role in policing.

"I think any mayor of Kansas City has a tremendous amount of responsibility for the budget and that includes the police department," Tuohey said. "Spending is absolutely something the mayor controls and that's a great deal of political power."

According to a Princeton University study released in February, "one life can be saved by hiring about 9.5 officers".

James doesn't think it's so simple.

"Even if you add more officers, where is any evidence that that's going to have an appreciable impact on violence in the city? Because it's not," James said. "... This issue of the number of officers, although it sounds good, it sounds logical, there's a heck of a lot more to it than that."

Nonetheless, it's hard to argue that KCPD isn't short-staffed.

FBI numbers for 2016 analyzed by the website governing.com show Kansas City has the lowest number of police officers per 10,000 residents among the top 10 cities for homicide rate cities based on the FBI's 2017 report.

"The number of police officers is absolutely crucial to combating crime and I don't understand how anybody could think otherwise," Tuohey said. "It's not only backed by research, it's obvious on its face."

Sadly, no additional crime prevention and no amount of new KCPD officers will make a difference for Antonio Shanklin, whose uncle introduced his two daughters during the vigil — little girls who will now grow up without a father.