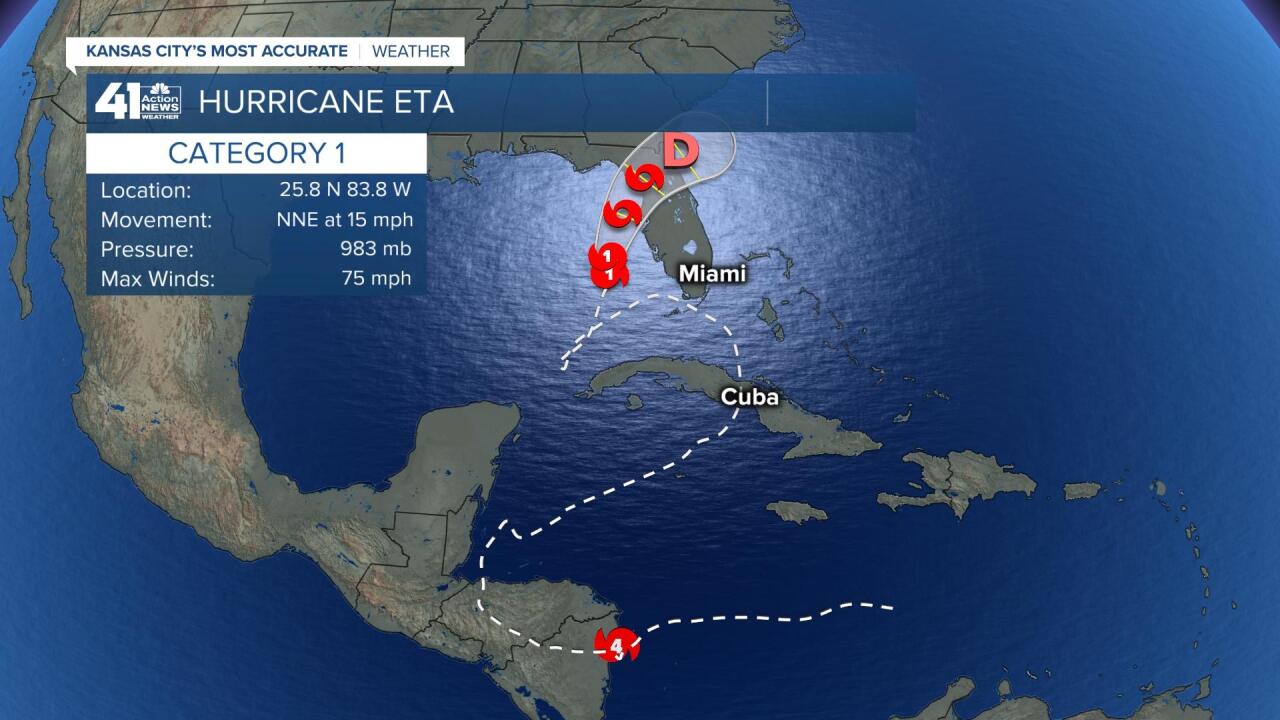 We awaken to a gorgeous and crisp Wednesday morning here in KC. High pressure is over Missouri and we are about to have a fantastic fall day. While we have this great weather, a hurricane just formed southwest of Tampa Bay, Florida.

Hurricane Eta reorganized this morning. Eta began organizing in late October, before Halloween, or two weeks ago. Eta was named a Tropical Storm on Novmeber 1, 2020, and it intensified to a major Category 4 hurricane as it blasted into Nicaragua. Here we are 10 days later and it has developed into a hurricane once again with 75 mph sustained winds.

We will track Hurricane Eta as it approaches the coast later today. Tropical Storm Theta has also formed in the Atlantic Ocean:

Theta breaks the record for the number of named tropical systems in one season. And, we are not done. We are now going through the Greek Alphabet, and the next name on the list is Iota. Following Iota is Kappa, and then Lambda. There is a very good chance we will get to Iota within the next few days, and then Kappa is not out of the question in around two weeks, and then that should be it, although Lamda is a possibility.

LRC Hurricane Hypothesis: Over a 20-year in-depth analysis, Weather2020, LLC has learned that hurricane season does not begin in June like the National Hurricane Center suggests. Hurricane season actually begins in October when the new LRC sets up and by October 6th or so, the tropical systems that develop now are indicators for next year's cycling pattern. Florida did not have even one landfalling named storm this entire season until the new LRC set up in the past few weeks. Eta is an indicator for next summer, which is not good news for Florida. Remember this now, as there is at least a 64% chance (based on our analytics) of a named storm right where Eta is located now, again next summer. We will know when it will happen once we learn what the cycle length of this pattern is, and we are still identifying that now!

Back here in KC, it is a lot calmer. Let's take a look:

The official KCI Airport rainfall total came in this morning at 0.64" yesterday. We are still a bit below average, and there is another chance of rain showing up early Saturday, or Friday night.

High pressure is over Missouri this morning, and this is why our winds are calm right now. There will be a light southeast breeze blowing later today as the air moves away from high pressure and towards low pressure.

By Friday, moisture from the Gulf of Mexico will be pushing west into Texas and north into Oklahoma while Kansas City stays under the control of another surface high pressure area over Missouri. These clouds and some rain will be moving our way, but it may not quite reach farther north than the south side of the KC metro area. We will look at the new data on 41 Action News tonight. It will be a gorgeous fall day with 100% sunshine!

Thank you for spending a few minutes of your day reading the Action Weather Blog. Have a great Wednesday. Happy Veteran's Day!